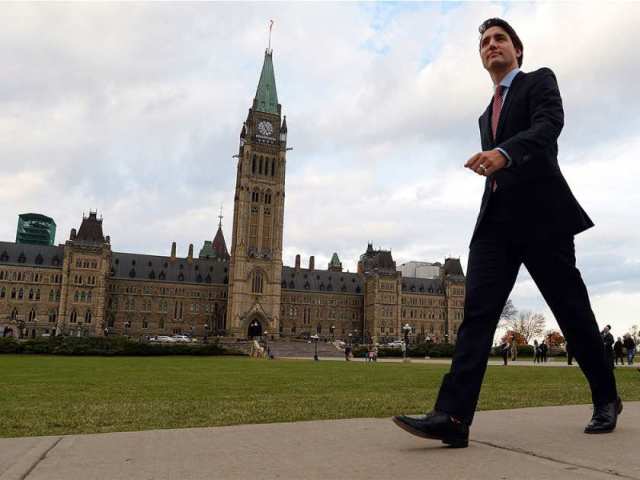 While many of us activists are still glowing over the defeat of Stephen Harper, the world’s worst climate villain, there is little time to waste in pushing the new Liberal government to take real action on climate. Exceeding the Harper standards on climate action will be easy but being better than Stephen Harper on climate is not good enough.

The following post by Cameron Fenton lays out the 350.Canada action plan leading up to the Paris COP21 climate talks some 40 days from now. “Justin Trudeau has promised “real action” on climate change that would see an end to fossil fuel subsidies, overhaul the pipeline review process to include climate change considerations and investment in clean energy,” remarks Cam Fenton. “It’s not that I believe in Justin Trudeau, it’s that I believe in us. I believe in people power.” (Rolly Montpellier, Editor for BoomerWarrior).

With the 42nd federal election in the books here in Canada, now the clock starts ticking down the 42 days until the Paris climate talks begin.

The good news is that Stephen Harper is no longer the Prime Minister of Canada. After nearly a decade in power, Harper has left a sea of devastation in his wake when it comes to climate change. We are one of the highest per-capita polluters on the planet. Here at home, we have a dismantled environmental regulatory system, an embarrassing relationship between Canada and indigenous peoples and an unregulated oil industry when it comes to greenhouse gases.

Here’s the bad news: while Stephen Harper’s government may have been a supporter of the fossil fuel industry, Justin Trudeau has failed to distinguish himself as a much better option.

Less than a week ago, we learned that Justin Trudeau’s campaign co-chair, Daniel Gagnier, worked as a contractor for the embattled pipeline giant TransCanada and given the company advice on how to lobby Trudeau to get its Energy East project built.

Trudeau has been a supporter of the Keystone XL pipeline, having travelled to the United States to lobby on behalf of the project. He has also expressed support for the Kinder Morgan pipeline, argued that there is “no need for ambitious political numbers” when referring to climate targets and failed to produce a clear plan that would see Canada fulfilling its responsibility to the globally agreed-upon ceiling for warming of two degrees Celsius.

On Oct. 30, 2013, just shy of two years ago, now Prime Minister Trudeau told a group of oil executives gathered at the Calgary Petroleum Club that he would create a regulatory system for the tar sands that “creates growth and protects the environment.”

It’s a great talking point, and one he’s articulated different versions of throughout the campaign. The problem is that, according to scientists, at least 85 per cent of tar sands needs to stay in the ground if Canada is going to play its part when it comes to climate change.

At the same time, Trudeau has promised “real action” on climate change that would see an end to fossil fuel subsidies, an overhaul of the pipeline review process to include climate change considerations and investments in clean energy. If he stays true to his word, the approval of the Northern Gateway pipeline could be reversed within the coming weeks, ending that project once and for all.

It’s for these reasons, and with a lot of trepidation that I think Justin Trudeau can do the right thing on climate change. That being said, I know that he won’t take the kind of bold action we need unless the climate movement forces him to. To be clear, it’s not that I believe in Justin Trudeau, it’s that I believe in us — I believe in people power. That’s why I’ve been helping to get ready for something called Climate Welcome.

In just over a week, hundreds of people will gather at the Prime Minister’s residence at 24 Sussex Drive in Ottawa to risk arrest over the course of four days of peaceful sit-ins.

We’ll be there with two demands. First, we want the government to freeze the expansion of the tar sands, to acknowledge that the mines we can see from space are big enough. Second, we want a commitment to transition Canada to a justice based, clean energy economy — a deliberate and steady plan to move from a 19th-century economy to a 21st-century one.

In some ways, I feel bad for Trudeau because after nearly a decade of Harper in power, he doesn’t have the luxury of a grace period when it comes to decisive action on climate change. With the Paris climate talks only a few weeks away, this could be his defining moment. During that same speech at the Calgary Petroleum Club, Trudeau told the crowd that he would pursue a national energy strategy “based on science and evidence” and now he has a chance to listen to the overwhelming number of scientists saying that today, climate action means leaving fossil fuels in the ground, starting with high carbon reserves like the tar sands.

In that speech in 2013, Trudeau tried out a line that he has repeated time and time again over the past two years. He said that “governments may be able to issue permits, but only communities can grant permission.”

My question is — will Justin Trudeau be true to his own words? The answer, I think, depends on if we do what it takes to hold him accountable.