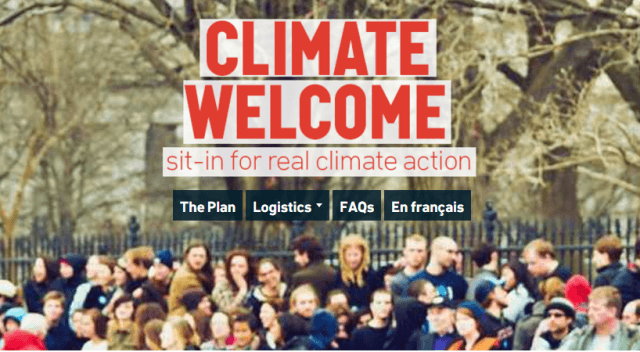 It’s a pivotal moment on our planet. 2015 has been defined by wildfires, floods and record breaking temperatures that made headlines across Canada and around the globe. And this past September was the warmest month ever recorded.

And it’s a pivotal moment in our country’s history with the opportunity to actually set a new course on climate action. More and more people realize that the time to act on climate solutions is quickly passing. Climate change demands urgent and decisive action.

For 10 years Canada has shamefully been a laggard on climate change. With a new government about to take power, NOW is the perfect time to push Prime Minister Justin Trudeau to act on climate.

Justin Trudeau has promised “real action” on climate change that would see an end to fossil fuel subsidies, overhaul the pipeline review process to include climate change considerations, investment in clean energy, the reversal of the Northern Gateway pipeline decision and upholding First Nations treaty rights.

And yet in the final weeks of the election campaign, we learned that Justin Trudeau’s campaign co-chair, Daniel Gagnier, had been in the employ of embattled pipeline giant TransCanada, even going as far as giving the company advice on how to lobby Trudeau to get its Energy East project built. Trudeau has been a strong supporter of the Keystone XL pipeline, having traveled to the United States to lobby on behalf of the project. He has also expressed support for the Kinder Morgan pipeline, argued that setting climate targets is unnecessary and failed to produce a clear plan that would see Canada fulfilling its responsibility to the globally agreed upon ceiling for warming of 2ºC.

We know that we, the people, will need to push for an urgent and drastic shift in Canada’s climate policies ahead of the Paris climate talks. We also know that this starts with a Prime Minister that understands that climate action and tar sands expansion don’t mix.

It is our belief that Justin Trudeau will not take the bold climate action needed unless the climate movement forces him to do so. That’s why we’re planning a series of serious, but gentle, civil disobedience actions starting November 5th to November 8 to welcome Justin Trudeau to office and call on him to get to work on real climate action.

For four days, people will by marching from Rideau Falls to the Prime Minister’s residence at 24 Sussex  and then sitting in front of the gates until the welcome gifts can be delivered. The gifts will come from all across Canada and come in many forms, from reports detailing how Canada can get off of fossil fuels, to thousands of messages describing why a clean energy future is in all of our best interest. Day 1 will be a reminder of the facts we’re up against. Day 2 will feature reminders of people who have been calling for climate action. Day 3 will focus on what’s at stake if we do the wrong things. Day 4 will highlight what we must do to avoid future dangers.

It will all come together to create a kind of “climate welcome committee”. We’ll take bold action to demand the government freeze tar sands expansion and come up with a plan to build a just, clean energy economy in Canada. We’ll be risking arrest with our trespass to demonstrate that we don’t have time to wait any longer for politicians to take action, that here and now is our moment of truth on climate.

Why are we risking arrest?

We’ve rallied, we’ve marched, we’ve written op-eds, we’ve confronted politicians and still Canada has remained a pariah on the world stage when it comes to climate action. We also know that we simply don’t have time to wait three, two or even one year for a new government to get its act together on climate.

We are ready to step up our mobilizations to demonstrate the urgency and immediate need for action in the face of a catastrophic global crisis to Canadian politicians.

The ‘arrest’ will take place at the gates to 24 Sussex. Demonstrations and sit-ins are not allowed on the sidewalk or street in front of the Prime Minister’s residence. As benign or peaceful as this event will be, it still crosses the legal line of trespassing and is thus illegal.

What are the legal issues involved with this action, and what support is provided?

Note: participants planning on partaking in civil disobedience must be at least 18 years old

We absolutely cannot guarantee anything in the legal process but there is a long tradition of civil disobedience and similar actions in Ottawa, with fairly consistent responses. If you intend to participate in the action, you must attend a training and an action briefing prior to the action. Trainings will include a legal briefing about what to be prepared for and expect.

All participants need to be responsible for their own safety and well-being (while being accountable to the broader group and the Action Guidelines). This includes legal support. We are working to provide basic legal support and advice to participants, but we cannot guarantee any other support beyond that.

Be aware that if you have extenuating circumstances (citizenship or immigration issues, or have outstanding warrants or an existing criminal record) your situation could be handled very differently than our legal briefing will be able to account for. We encourage people in these situations to consult a lawyer, and recognize that your situation could be very complicated for yourself, and the rest of the action. We are not encouraging minors to participate.

Come and be a part of the Climate Welcome. Sign on Here.