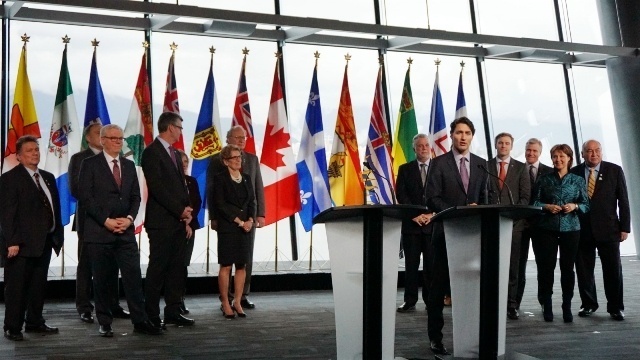 The Vancouver Declaration is a plan to make a plan. In the photo, Prime Minister Trudeau, accompanied by the provincial premiers and territorial leaders, makes the announcement.

I was recently part of a three-person team from Citizens Climate Lobby (Ottawa) which met with Member of Parliament Greg Fergus. The purpose of the meeting was to have a frank discussion with MPP Fergus on Canada’s climate action strategy, and more specifically, on a national plan to put a price on carbon. The Citizens Climate Lobby (CCL) is a strong proponent of the Carbon Fee and Dividend pricing mechanism.

During our conversation, MPP Fergus welcomed the opportunity of working with groups such as CCL as Canada embarks on its national climate action plan. What I personally retain from our lobbying is the importance of recognizing the positive steps undertaken by the Liberal government while still holding Prime Minister Justin Trudeau fully accountable for the bold climate promises made during the election campaign and at the Paris Agreement conference.

So in that spirit of fairness I fully acknowledge that in a mere 5 months since taking office, Justin Trudeau has accomplished more on the climate file than the previous climate-obstructionist Harper government did in a decade. The First Ministers Meeting to talk about climate change was a major step forward.

The commitment we made today with the Vancouver Declaration shows all First Ministers of this country united on carbon-pricing mechanisms….the fact that we have consensus on the need to include carbon-pricing in our approach to addressing climate change across the country is a great thing indeed ~ Prime Minister Trudeau addressing reporters in Vancouver.

However, “Canadians looking for meaningful climate action from the federal government since the signing of the Kyoto Protocol ­— the world’s first climate treaty — in 1997, may be disappointed the Vancouver Declaration lacks specifics,” says Derek Leahy in a recent DeSmog Canada article.

The six-point document contains no renewable energy targets, sector specific regulations on GHG emissions, or any mention of Canada’s number one contributor to climate change: the oil and gas sector. The sole national target mentioned in the document is a commitment to meet or exceed Canada’s 2030 target of 30 per cent cuts in emissions levels compared to 2005 levels — a target established under the previous federal government that has been criticized as weak.

A Plan to Make a Plan

So in practical terms, what we have is a plan to make a plan. The new consensus on climate action is to spend another six months to discuss an integrated carbon pricing plan with different mechanisms being adopted by provinces and the territories according to each jurisdiction’s specific circumstances. There is no consensus on establishing a national minimum carbon price per tonne of CO2.

Under this scenario, Canadians will not have a ‘real climate plan’ until sometime in 2017 leaving a short 13-year window — a mere 156 months — to reach the 2030 emissions reduction targets tabled in the Paris Agreement.

Heading in the Wrong Direction

In 2005, Canada produced of 749 megatonnes of greenhouse gas emissions according to Environment Canada. The Trudeau government must now cut 225 megatonnes, down to 524 megatonnes per year — a formidable if not impossible challenge — to achieve its Paris commitment.

Canada’s 2015 Emissions Trend Report shows that emissions are actually on the rise — from 726 MT in 2013 to 766 MT by 2020. The reality is that it would require cuts equivalent to all the emissions from cars, trucks, electricity and buildings in the country. — clearly a non-starter.

The working group on carbon pricing faces the almost impossible task of coming up with a pan-Canadian strategy for pricing carbon that will allow Canada to reach its emissions targets. The current target — a 30 percent reduction in greenhouse gases from 2005 levels by 2030 — was set by the Harper government.  New higher targets are coming in time for the next Canadian climate summit in October according to Catherine McKenna, Minister of the Environment and Climate Change.

Unfortunately the majority of provincial premiers are lacking the national vision of Prime Minister Trudeau. With the exception of  few — Notley of Alberta and Couillard of Quebec — the premiers are limited by their narrow provincial mindset, shortsightedness  and a what’s-in-it-for-me perspective.

Saskatchewan Premier Brad Wall is vehemently opposed to any form of national carbon tax. Of all the premiers, Wall has become the most obstructionist and Harper-like on climate change. His idea of reducing emissions is a billion-dollar project involving the capture and storage of carbon dioxide which is then sold to oil companies which use it to extract more fossil fuels. Wall would like Canadians to believe that his scheme is equivalent to pricing carbon. How ridiculous!

Nova Scotia’s Premier Stephen McNeil is claiming that the purchase of hydro power from Newfoundland is a type of carbon pricing. BC’s Premier Clarke wants to expand her province’s LNG (Liquid Natural Gas) sector. Premiers continue to support the expansion of pipelines and the Tar Sands making the attainment of any emissions targets even more elusive.

According to the latest Environment Canada national inventory emissions report, the oil and gas sector’s share of Canadian emissions was 25 percent in 2013. With rising Tar Sands production in Alberta and BC’s ambitious LNG expansion, the sector’s share will increase to 52 percent by 2030 — the same year Canada is to reach its Paris targets. Something just does not add up.

Canada needs a viable, effective and credible nation-wide price on carbon, nothing less. The current six month process, aimed at reaching an agreement with the premiers in October, may result in a hybrid carbon pricing system which might feel good politically but which would be a watered-down compromise, highly ineffective and unworkable. Some provinces could do pretty well what they want and still label it carbon pricing. It might be a failure.

I strongly urge Prime Minister Trudeau to impose a national carbon price similar to the British Columbia and the Alberta model. Alberta’s carbon price will be $20 per tonne starting in 2017 increasing to $30 per tonne in 2018.

Some might worry that such a unilateral decision will damage federal-provincial relations. But then, these have not been great for the last decade anyways. And there’s a way to soften the short-term pain with he transfer of hundreds of millions of dollars to the provinces in support of green infrastructure projects . It’s funny how money will always bring your friends back.