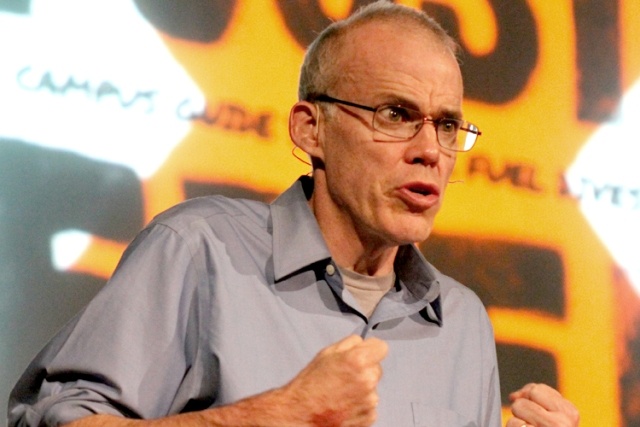 A new wave of politically driven attacks on environmentalists and climate change advocates is emerging. It’s creepy and disturbing. It resembles tracking or stalking. And it’s serious. The following post was first published on Desmog. (Rolly Montpellier~Editor for BoomerWarrior).

In a video posted to Vine, respected author and climate change campaigner Bill McKibben turns for just a second or two to eyeball the person holding the camera, before turning his gaze back to the front of the room. There is no context to the video.  Nothing is said.

In another video taken in Australia, McKibben is shown speaking to an audience, but the context is again removed.  His words are replaced with music.

To most people chancing upon the videos, the two clips would seem incongruous and pointless.

But the Vine channel belongs to CoreNews.org — a website that is the public facing arm of a new politically-motivated attack on environmentalists and climate change campaigners operated by well connected political advisers and researchers.

Lasting only a few seconds, the videos were an attempt to put a shot across the bows of McKibben and his supporters, of which there are many. A promise made weeks earlier by Republican Party activists to follow him around with a video camera — wherever he might go — had apparently begun.

The videos were taken by so-called “trackers” working for America Rising Squared (AR2), an operation that has sprung from the new wave of attacks on climate activists that has become a mainstay of the US political machinery.

Brian Rogers, AR2 executive director, has said his group will “hold Steyer and the Environmentalist Left accountable for their epic hypocrisy and extreme positions which threaten America’s future prosperity.”

One early contribution of ARsquared.org was a slick video accusing Tom Steyer of hypocrisy over previous fossil fuel investments.

Steyer told The New Yorker’s Jane Mayer the accusations were “complete and utter nonsense” because, Mayer wrote, his investments were held in trusts where profits were transferred to a charity.

“They have to know they’re lying. It’s completely dishonest, unethical, and pitiful. And it’s creepy,” Steyer said, adding while the attacks would not deter him, he was concerned they could put others off climate activism.

McKibben told DeSmog: “I think it’s pretty clear that they want to talk about anything other than climate change.”

AR2 has its origins in the spring 2013 launch of America Rising PAC — the political action committee created by Republicans to carry out so-called “opposition research” into Democrat opponents. The PAC’s prime target is Hillary Clinton.

America Rising PAC employs trackers to follow candidates’ every move in the hope of capturing a potentially embarrassing slip-up or hypocritical statement while researchers dig into their histories for anything that might put them in a bad light.

In a submission last week, America Rising said it had filed “almost 2000” FOIA requests as part of its work.

America Rising’s research and tracking material is pushed to the public domain through branded channels, media briefings or paid advertising.

At the same time as the PAC was launched, a for-profit company America Rising LLC was also formed to carry out paid work on behalf of its allies in the Republican movement.

Joining the PAC, the LLC and AR2 is a fourth group — the private company Definers Public Affairs — that shares the politically-linked leadership of America Rising and several staff members with the other groups.

For example, AR2’s executive director Brian Rogers is also a Senior Vice President at Definers. Rogers is a former senior adviser to Republican Senator John McCain and held key roles in McCain’s run for the US presidency in 2008. As reported on Huffington Post, Rogers also had a short stint working for Al Gore’s Alliance for Climate Protection.

AR2’s communications director is Jeremy Adler, who moved straight out of the offices of Marco Rubio’s failed campaign for the Republican nomination. Before that stint, Adler was a research analyst at America Rising LLC and a “war room” researcher for Republicans.

The well-connected political operatives at Definers are offering to do for corporations what they have been doing for their friends in politics — dig for dirt and track their opponents.

According to the Definers website, the company will “build and influence media narratives, move public opinion and provide powerful ammunition for your public relations and government affairs efforts.”

Matt Rhoades, the founder of Definers, was Mitt Romney’s campaign manager when the former Massachusetts governor ran for president in 2012.

According to Politico, Pounder and Rhoades have been working to try and discredit investigative journalist and author Jane Mayer.

The New Yorker’s Mayer has become a target over her detailed reporting of the oil billionaire Koch brothers and their outsized influence on the US political right.

AR2 has been registered with the IRS as a not-for-profit 501(c)4 “social welfare” organisation – meaning it does not have to disclose its funders but is generally allowed to spend up to half its cash on political activity.

The funders of AR2 are not known and 501(c)4 groups do not have to declare them.

But it seems likely that supporters of AR2 will be drawn from a similar pool of donors to America Rising’s political action committee (PAC).

According to America Rising PAC’s filings, compiled by the Center for Responsive Politics, donors in this electoral cycle include so called “vulture capitalist” Paul Singer, who gave $250,000. Singer has also donated to the work of Danish political scientist Bjorn Lomborg, who holds contrarian views on climate science and says the world’s poorest countries need to burn vast quantities of fossil fuels.

In a statement responding to the new attack strategy, McKibben says: “I’m of course flattered that our work has exposed the fossil fuel industry enough that they feel the need for this kind of personal attack — but as usual, the real news is the lengths they will go to avoid talking about the greatest issue of our time, their ongoing wreckage of the planet’s climate, and in the process so many of its people.”