Below 2C
Home Climate Climate Change On The Edge of 1.5˚C Of Warming 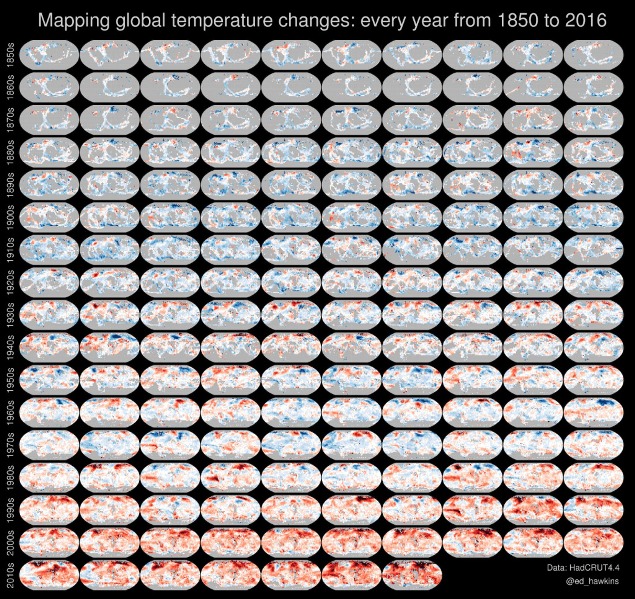 The following visualization using small multiples is a creation by Ed Hawkins, a climate scientist with NCAS (National Centre for Atmospheric Science). The visual consists of small temperature maps showing temperature changes from 1850 to 2016, using the 1961-1990 period as the baseline. The overall global warming trend is clear as a bell. Planet earth is inching closer and closer to critical levels of warming. We are on the edge of 1.5˚C.

Climatologists have been expecting an abrupt rise in global temperatures for some time now. Joe Romm, writing for ThinkProgress, claims that the long-awaited jump in global warming is here. The annual State of the Climate Report confirms that 2015 surpassed 2014 as the hottest year on record. Carbon dioxide, sea levels and temperatures all hit new milestones according to the report.

The first eight months of 2016 have been the warmest ever of any other 8-month period. June was the fourteenth consecutive month to shatter heat records. July beat June, and August beat July. NASA now predicts with 99 percent certainty that 2016 will easily become the hottest year on record. This will be the earth’s third hottest year in a row.

Rate of Warming Speeds Up

The planet is baking and the rate of temperature change is accelerating. Our climate is starting to change faster than models predicted years ago. We are entering a period of rapid changing climate which will surpass historical levels of warming according to studies conducted at the Pacific Northwest National Laboratory (US Department of Energy).

August was the warmest month ever recorded continuing a streak of 11 consecutive months of new monthly high-temperature marks.

An earlier analysis by Climate Central shows that we are on the edge of the 1.5°C inspirational threshold set in Paris last December. The average global temperature change for the January to March 2016 period was 1.48°C, almost reaching that ambitious target agreed to by the signatories of the Paris Agreement. With this agreement, nations signed on to a goal of keeping warming below 2 degrees Celsius, while pursuing actions to stay under 1.5 degrees now becoming an impossible feat.

On the surface there appears to be little difference between the two targets. But studies show that the likelihood of extreme weather increases dramatically even with just a half-degree of warming. Hot weather events have already increased fivefold and will  double at 1.5°C and then double again at 2°C.

As we find ourselves on the edge of 1.5°C, there is much to be concerned about. And as warming slips past 1.5°C, we will spiral down the rabbit hole of  2°C and more of warming. Two degrees “contains significant risks for societies everywhere,” says Johan Rockstrom (Stockholm Resilience Centre).

So let’s not let that happen!