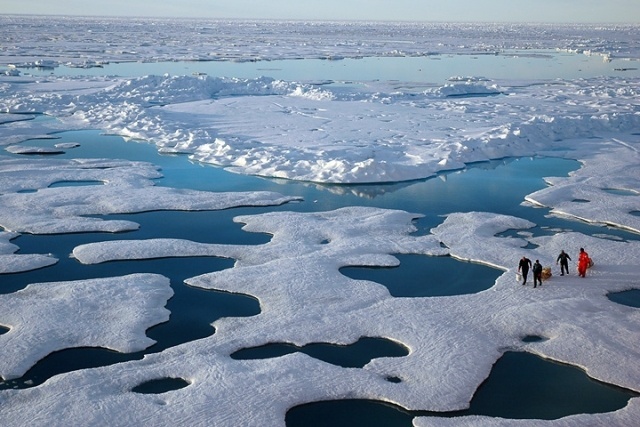 The following post is reproduced from the Climate Reality site. I’m a Climate Reality leader from the Chicago2013 leadership training and pleased to feature this resource material about the vanishing of old Arctic sea ice.  (Rolly Montpellier, Editor for BoomerWarrior).

The climate is changing. We know that. But in the Arctic, climate change is in overdrive —  it’s warming twice as fast as the rest of the world, on average.

Check out this video from the National Oceanic and Atmospheric Administration (NOAA) that shows how — and why — Arctic sea ice has changed over the last 25 years.

What is Old Arctic Sea Ice?

Time lapse of the age of sea ice in the Arctic from week to week since 1990, updated through the March 2016 winter maximum. The oldest ice (9 or more years old) is white. Seasonal ice is darkest blue. Old ice drifts out of the Arctic through the Fram Strait (east of Greenland), but in recent years, it has also been melting as it drifts into the southernmost waters of the Beaufort Sea (north of western Canada and Alaska, Source: NOAA).

Simply put, sea ice is frozen water from the ocean. It forms there and melts there, unlike icebergs and glaciers (which emerge on land and can float in the ocean). Old Arctic sea ice plays an important role in the global climate system.

But how? Well, sea ice is bright and reflective: 80 percent of the sunlight that hits it is reflected back into space. But when sea ice melts, the dark ocean surface is exposed which, by contrast, absorbs 90 percent of the sunlight striking it. And when oceans become warmer, more sea ice melts, and suddenly you have a dangerous and powerful positive feedback loop — a runaway train.

What is Going On?

Thirty or so years ago, the sea ice in the Arctic Ocean was mostly old, thick ice that survived year-round. It was surrounded by seasonal ice that was much younger, thinner, and more vulnerable to changing temperatures. But with climate change, more and more Arctic sea ice hasn’t lasted long enough to withstand warming summers — and that puts the entire Arctic at risk to melting, causing sea levels to rise and ice to retreat in a big, big way. That’s not good for the Arctic, and it’s not good for the planet.

Big Oil — Disaster of Their Own Making

We know that when we burn dirty fossils, harmful greenhouse gases like carbon dioxide are released into our atmosphere. Because of that, the climate is changing, sea and land ice is melting, and sea levels are rising.

But Big Oil may be able to profit off of melting sea ice — a disaster of their own making. Melting sea ice makes parts of the Arctic Ocean accessible that once were not, opening up new offshore drilling opportunities for at least 90 billion barrels of crude oil. But, climate impacts notwithstanding, drilling in the Arctic is a particularly risky endeavor. Huge, moving icebergs, strong winds and big waves, along with colder temperatures during the winter, make spills more likely as well as more difficult to clean up.

This Must Be Stopped!

Thanks to people like you, we’ve made huge strides towards a future powered by clean energy. But we can’t lose momentum now.

Join our email activist list today and we’ll connect you with opportunities to take meaningful action to stop climate change. If you’ve ever wondered what you can do in the fight for a better future, this is one small step you can take to make a big impact.