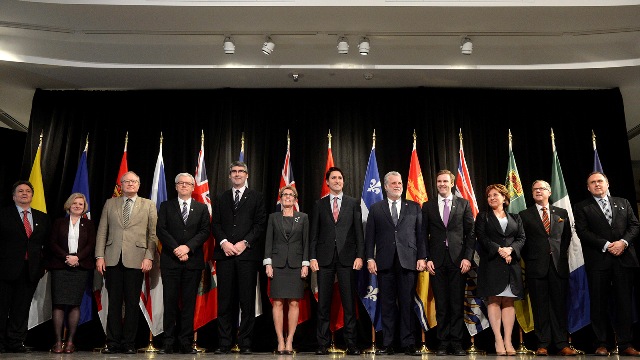 Dr Cara  Augustenborg is an environmental scientist lecturing on climate change at University College Dublin. Cara is also Chairperson of Friends of the Earth Ireland. In a recent OpEd in Independent.IE, she says that “we are undoubtedly governed by climate hypocrites.” She makes this claim in reference to Ireland’s hypocrisy in its approach to climate action. On this side of the Atlantic, some of Canada’s provinces are similarly governed by climate hypocrites.

In my previous post, I wrote that Canada’s national carbon pricing plan is a giant leap forward. That was a deliberate overstatement. In fact, the carbon pricing plan is totally incommensurate with what is needed to deal with the urgency of climate change — a mere drop in the bucket. Quite frankly the Canadian plan is a lowest-common-denominator strategy designed to reign in the support of reluctant provincial premiers, some of whom are climate hypocrites. Prime Minister Trudeau wanted more but had to settle for less.

When Prime Minister Justin Trudeau stood in the House of Commons and uttered these few words, he set the stage for a fall of acrimonious debate on Canada’s national carbon pricing strategy and climate plan.

If neither a price nor cap-and-trade system is in place by 2018, the Government of Canada would implement a price in that jurisdiction.

The announcement comes just after a new poll commissioned by Clean Energy Canada (conducted by Nanos Research) reveals that 77 percent of Canadians support a national plan to achieve carbon cuts Canada agreed to under the Paris accord. And yet many Premiers continue to demonstrate a lack of climate vision and leadership. They are choosing instead to focus on narrow provincial agendas which are effectively blocking the strong climate steps required for Canada to reach its Paris Agreement targets.

Minutes after the Trudeau statement some provincial premiers reacted with typical childish self-interest displaying yet again the half-pint leadership that we have come to expect from provincial premiers on the climate — taking the low road rather than the high road.

BC already has a carbon tax. But its support of the federal government’s carbon pricing plan is both insincere and deceptive. In fact, it’s conditional upon the recent approval of the $36 billion LNG (Liquefied Natural Gas) project considered by many as a giant carbon bomb. The project includes fracking operations, the construction of a pipeline and an export terminal. Expanding fossil fuel infrastructure compromises our ability to act adequately on climate change and reach our Paris commitments.

Premier Rachel Notley’s support of the national carbon plan hinges on the building of pipelines.

As far as we’re concerned, we can’t be talking about the sort of prices that got rolled out today until we get a commitment from this federal government that they’re going to move on this fundamentally important economic piece that Albertans need…And we need to get a pipeline. (Rachel Notley statement in Edmonton after hearing the Prime Minister’s announcement).

So it’s clear that Alberta will not back the federal plan unless it has new oil pipelines to tidewater, making it fundamentally impossible to reduce Canada’s greenhouse emissions.

Premier Wall of Saskatchewan is the strongest opponent of carbon pricing. Even his colleagues politely accuse him of having a “different worldview”. He has actively been working to hijack federal efforts to introduce carbon pricing and is now accusing the Prime Minister of “disrespect” and “betrayal” following the carbon announcement. And Wall vows to continue his obstructionist stance on carbon pricing:

In the coming weeks, Saskatchewan will investigate all options to mitigate the impact of one of the largest national tax increases in Canadian history. (Brad Wall Facebook post).

In spite of setting a low carbon bar — the initial fee is $10 per tonne, all carbon revenues will stay in the provinces which get to decide how to use the revenues to reduce carbon emissions  — Prime Minister Trudeau is not getting enthusiastic provincial support for his national carbon pricing plan.

Ontario and Quebec have been key allies but other provinces like Nova Scotia and Newfoundland walked out of a meeting of environment ministers with Catherine McKenna in Montreal after Trudeau’s announcement. Rather than seizing an opportunity to exercise climate leadership, some provincial officials displayed childish behaviour by feeling insulted and leaving the room with their bruised egos over the state of federal-provincial relations. They obviously need to be reminded about the impacts of climate change.

Elected One Year Ago

The Trudeau government came to power one year ago almost to the day (October 19, 2015) with an environmental platform that promised strong federal leadership on climate change. Later in Paris, Trudeau committed to a 30 percent reduction of emissions by 2030, based on 2005 levels. To reach this goal, Canada’s price on carbon must rise to $200 per tonne by 2030. This is a nearly impossible dream given that the 2022 price will be a measly $50 per tonne — only 25 percent of the required carbon price. The following chart illustrates the daunting challenge facing Canada.

The trend lines in the graph do not reflect the recent carbon policy announced by the Federal government.

Unless other radical initiatives and measures are introduced to reduce emissions, Canada will not reach its 2030 targets. We would need to freeze Tar Sands expansion, stop all fossil fuel infrastructure projects and end fossil fuel subsidies. But there is no political will to do so.

Once again, the group of provincial premiers and territorial leaders have missed an opportunity to be visionaries and nation builders.

It’s easy to obstruct and deconstruct. But to construct, that is the challenge.