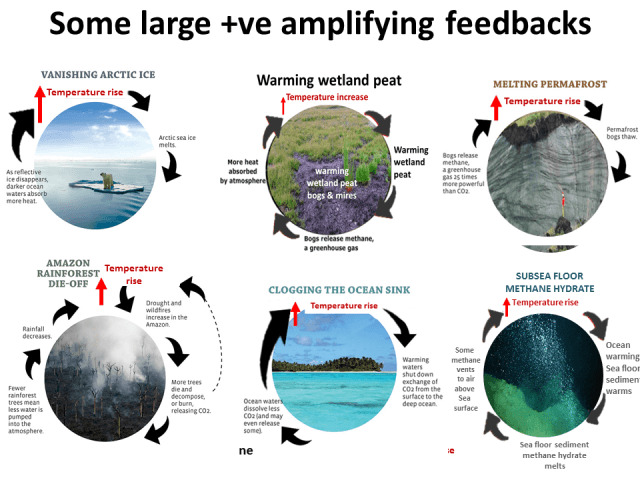 I’m pleased to welcome Kevin Hester as a new contributor to BoomerWarrior.Org. Kevin lives near Auckland, New Zealand. He believes that “abrupt climate change will lead to the end of most if not all complex life on this planet.” The crisis of our global civilization is real. “As a species we are doomed to near term human extinction due to the crack-like addiction we have to carbon,” says Hester.

Climate scientists have been warning us of the tipping point issue that we can’t see coming. But we will see them in the rear view mirror. There is a 10 to 20 year lag in the cause and effect between when we emit carbon and when we see the effects. We have now crossed sufficient tipping points to know we’re in the early stages of runaway global warming.

All science papers and most analyses are very conservative but research is not my role. I follow the “Precautionary Principle” and can patently see runaway abrupt climate change gaining pace literally every day.

It seems incredible to think that the human movie could be coming to an abrupt halt, but if you were able to ask the 150 to 200 species that go extinct every day, I’m sure that they would say it was rather sudden!

The Crisis of Civilization video highlights the overwhelming scientific information pointing to human extinction by 2030. Governments and Universities they control are in denial.

The following excerpts from the biological sciences journal published by The Royal Society reinforce the vulnerability of the human species and go a long way to expose the crisis of our global civilization.

Virtually every past civilization has eventually undergone collapse, a loss of socio-political-economic complexity usually accompanied by a dramatic decline in population size [1]. Some, such as those of Egypt and China, have recovered from collapses at various stages; others, such as that of Easter Island or the Classic Maya, were apparently permanent [1,2]. All those previous collapses were local or regional; elsewhere, other societies and civilizations persisted unaffected. Sometimes, as in the Tigris and Euphrates valleys, new civilizations rose in succession. In many, if not most, cases, overexploitation of the environment was one proximate or an ultimate cause [3].

But today, for the first time, humanity’s global civilization—the worldwide, increasingly interconnected, highly technological society in which we all are to one degree or another, embedded—is threatened with collapse by an array of environmental problems. Humankind finds itself engaged in what Prince Charles described as ‘an act of suicide on a grand scale’ [4], facing what the UK’s Chief Scientific Advisor John Beddington called a ‘perfect storm’ of environmental problems [5]. The most serious of these problems show signs of rapidly escalating severity, especially climate disruption.

1 – Diamond J. 2005 Collapse: how societies choose to fail or succeed. New York, NY: Viking.
2 – Morris I. 2011 Why the west rules for now: the patterns of history, and what they reveal about the future. New York, NY: Picador.
3 – Montgomery DR.  2012 Dirt: the erosion of civilizations. Berkeley, CA: University of California Press.
4 – Brown J. 2012 Mankind must go green or die, says Prince Charles. The Independent (London).
5 – Sample I. 2009 World faces ‘perfect storm’ of problems by 2030, chief scientist to warn. The Guardian.

This post was previously published in Hacking at the Tree of Life. It has been editorialize for re-posting in BoomerWarrior.