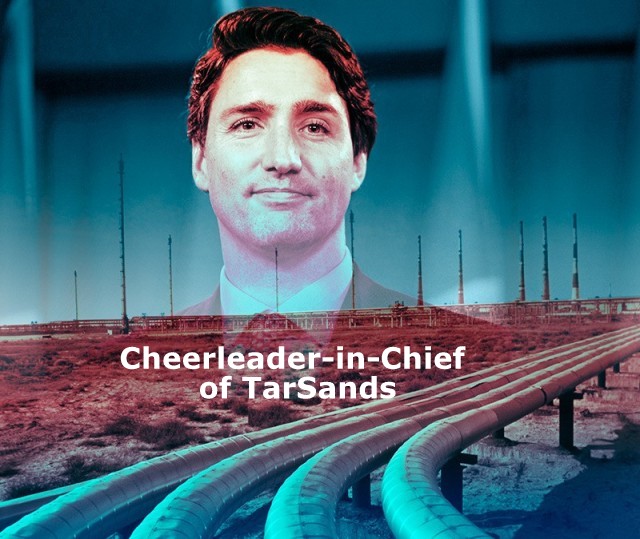 It turns out to be two pipelines — Kinder Morgan and Enbridge Line 3 — and the LNG (Liquefied Natural Gas) project in BC for a national carbon price. And so, carbon insanity prevails as Trudeau becomes the cheerleader-in-chief of the fossil fuel industry in Canada.

In 2012 Trudeau said in Calgary that “There is not a country in the world that would find 170 billion barrels of oil and leave it in the ground.” And at the Paris climate talks in December of 2015 he boasted about Canada being back. We are ready to “take on a new leadership role internationally,” said Trudeau.

And so which one will it be, international climate leader or fossil fuel industry shill? He cannot be both. Canadians will not be fooled by such contradictory climate behaviour.

Trudeau’s carbon scorecard is taking quite the beating with these announcements. Canada’s Paris targets call for a reduction of 200 MtCO2 by 2030. Trudeau’s promise is to cut emissions to 523 MtCO2 below the 2014 levels of 724 MtCO2. This is now all but impossible.

Recent climate policy announcements are dwarfed by the billions of tonnes of carbon pollution that will be carried by these pipelines (Kinder Morgan and Line 3) during their 40-50 year lifespans.

Canada’s Mid-Century Strategy just submitted to the United Nations calls for “an emissions abatement pathway consistent with net emissions falling by 80% in 2050 from 2005 levels. This is consistent with the Paris Agreement’s 2°C to 1.5°C temperature goal.” To achieve this goal, we need to cut 200 MtCO2 of carbon.

With the two pipeline approvals, Trudeau is adding (not cutting) over 200 million tonnes of climate pollution (MtCO2) coming from Alberta. “That exceeds the combined annual emissions from 100 nations,” says Barry Saxifrage (National Observer) who is tracking Trudeau’s carbon scorecard. The Petronas LNG project adds another 70 MtCO2.

The Saxifrage chart above shows the climate contradictions of the Liberal government. First there’s the Trudeau promise of MtCO2 — the Paris goal. The green bars are the running total of carbon reduction resulting from recent climate policy announcements. The red bars are the new emissions in Canada whereas the black bars are emissions exported by Canada to foreign markets.

So let’s do a simple math summary:

The betrayal felt by Indigenous leaders is deep. “Trudeau lied to us…It’s all another sleazy, pathetic, lame public relations act on the part of Trudeau to appear that he is taking a balanced approach when that is not the case,” said Grand Chief Stewart Phillip of the Union of British Columbia Indian Chiefs during an interview with Macleans Evan Solomon.

Trudeau is a hypocrite by trying to pass these off as great for the Canadian economy, better for the middle class and good for the environment. He claims that his decisions are based on evidence and science. Much of that evidence comes from a corrupt and inept NEB. And there’s no science on this planet that proves that fossil fuel projects can lead to lower emissions. NONE.

The pipeline decision is a disgraceful act. And what makes it even more disgusting is that the Trudeau government claims to be genuinely concerned about the environment.

When you look at Catherine McKenna (Minister of the Environment and Climate Change) during the announcement, it’s obvious she’s not happy. I’ve heard her say on several occasions that she entered politics to make the world better for her children and that she will not let her children down. And I do believe her. She’s a sympathetic and genuine individual who is forced to stick to the party line.

McKenna has two choices: she can continue to engage in Trudeau’s bizarre climate dance or do the honourable thing and resign in indignation.

This Is Not Over

“I have a feeling, we’re going to be talking about this for a while to come,” said Trudeau at the end of his press conference. And he is right about that.

Canada will be engulfed by civil disobedience, ongoing protests and long drawn-out court challenges during the next decade. I, and thousands of Canadians like myself, will not sleep until the Kinder Morgan and Energy East projects die on the drawing board.

I take no comfort in Trudeau’s words “if I thought this project was unsafe … I would reject it.” I do not trust him with the future of our children and grandchildren.