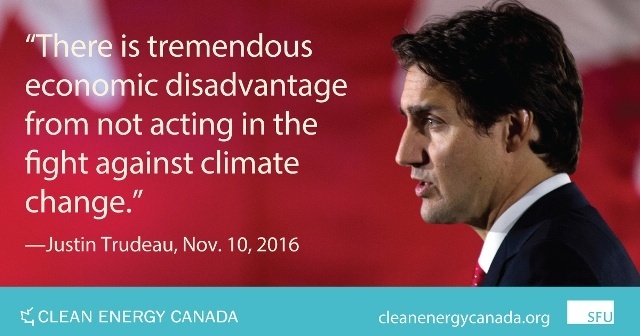 I’m pleased to add Clare Demerse as a contributor to BoomerWarrior.Org. In this first article Clare explores the inescapable costs of climate change. She wonders if Canada should avoid the potential impact of taking a leadership role on carbon pricing ahead of the United States. (Rolly Montpellier~Editor for BoomerWarrior).

With climate skeptic Donald Trump moving into the White House next year, critics in Canada are asking whether policies to cut carbon pollution here are now too expensive.

So this feels like the perfect time for a reminder about the costs of climate change itself—the costs that smart regulations on carbon pollution will help us avoid.

In a nutshell: the cost of climate change in Canada is already big and growing, with the potential to become enormous.

Over the past six years, that fund has paid out more—nearly a billion dollars more, in fact—than it did over its first 39 years of operation.

The Insurance Bureau of Canada publishes a set of statistics each year. In its 2016 assessment, the Bureau noted that it has been “reporting on a rise in claims as a result of increases in severe weather events related to climate change” for over a decade.

That’s because they’ve tracked a sharp rise in the costs of “catastrophic” disasters, meaning those that carry a price tag of $25 million or more.

The federal government offers a kind of insurance of its own through a fund called the Disaster Financial Assistance Arrangements program, which helps provinces and territories recover from natural disasters. That fund has seen the same sharp uptick in payouts that private insurers have noted, with payments growing from an average yearly payout of about $12 million from 1970 to 1994, to an average of $163 million from 1995 to 2004, and then to an average of $373 million between 2005 to 2015.

The result? Over the past six years, that fund has paid out more—nearly a billion dollars more, in fact—than it did over its first 39 years of operation.

(Source: Office of the Auditor General of Canada)

The Commissioner of the Environment and Sustainable Development summed it up this way: “severe weather events have resulted in rising costs to governments at all levels and, by extension, to all Canadians.”

She’s right, of course—but some Canadians have felt those losses more directly than others, and not just those who have faced the stress and cost of rebuilding after wildfires or floods.

The direct costs are also being paid by Canadians working in sectors like agriculture, forestry and mining, as an authoritative 2014 assessment makes clear.

In March 2012, for example, a heat wave in Ontario caused fruit trees to blossom five weeks earlier than usual—and then frosts in April destroyed approximately 80 per cent of apple blossoms. Total losses for tender fruits that year were estimated at $100 million.

In the forestry sector, warmer winter temperatures linked to climate change is the major factor contributing to the outbreak of the mountain pine beetle in Western Canada, which had reduced the economic value of over 18 million hectares of Canadian forest by 2012. These impacts contributed to mill closures and lost jobs.

And in the north, thinner ice and shorter winters have limited the use of ice roads, producing higher costs for industries and communities. The warmer winter of 2006 cost the Diavik diamond mine an extra $11 million, as it had to fly in 15 million litres of fuel rather than driving it in over ice roads.

The potential costs grow as we look ahead. And while some of these are already unavoidable, making adaptation to climate change a necessity, the level of risk we face depends on how quickly and deeply we cut carbon pollution.

In 2011, the National Roundtable on the Economy and the Environment calculated that the cost of climate change for Canada could grow to between $21 to $43 billion a year by 2050—roughly one per cent of GDP that year.

That’s the average estimate, but the report notes that “there is a risk those costs could be not just higher, but much higher”: the model found a five per cent chance that the economic cost to Canada in 2050 could be greater than $91 billion.

Because it leads to warmer summers and poorer air quality, climate change will result in earlier deaths and more illnesses in Canada’s cities. In Toronto alone, these costs could be between $3 million and $11 million per year by the 2050s.

We could list more big numbers, but the real point is this: there are no zero-cost options available here.

We can choose the potential cost of taking action to curb our pollution ahead of the United States—although there are very good reasons to believe that clean energy will continue out-competing power from fossil fuels in the U.S. even under President Donald Trump.

If we go that route, there are plenty of smart, effective policies to choose from—including some in effect in Canadian provinces today—that will spur innovation and clean growth while we cut our carbon pollution.

Or we can choose the far larger, far riskier consequences of climate change itself.

This article was first published on Clean Energy Canada