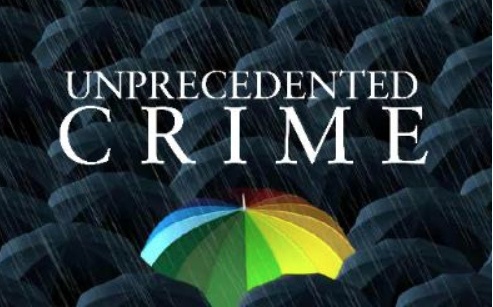 Unprecedented Crime is a game-changer. The debate about the effects and the causes of climate change is over. And the power of climate deniers is dwindling under the pressure of a growing public outcry for comprehensive climate action needed to curb the runaway warming of our planet. The sobering reality is that the 10 hottest years ever recorded have happened since 2007.

The co-authors of Unprecedented Crime, Elizabeth Woodworth and Peter Carter, focus on the culpability of governments, our institutions, the corporate sector and the media for their wilful failure to respond adequately to the climate emergency.

For decades, society has understood and has known about the looming climate crisis. But something has gone awfully wrong. Unprecedented Crime exposes the criminality and the liability of the fossil fuel industry and governments that have perpetrated obvious climate crimes against humanity, especially young people.

Over the last decade, environmental laws have grown in number and importance, fast becoming a strategic tool in the war against climate change. Climate lawsuits are forcing policy-makers and the international community to be more ambitious and comprehensive in their approaches to climate change. Mitigation, adaptation and finance are now part of the climate dialogue happening at international climate talks. Litigation has evolved into a powerful strategy against governments for the crime of omission to protect the rights of their citizenry – the duty of public trust.

The Truth of Climate Science is Unstoppable

In Part 2 of the book, Carter and Woodworth outline the multiple actions that people must take to bend the curve on the relentless increase of greenhouse gas emissions by helping the reader see “powerful game changers on the horizon”. The movement to price carbon emissions is rapidly growing around the globe. There is a loud call for the elimination of fossil fuel subsidies worldwide to facilitate the transition to a clean energy platform. Global markets are leading the transition to a clean energy future with solar energy now becoming mainstream.

Led by New York City, dozens of cities are engaged in emission-reduction strategies showing ambitious targets of 80 to 95 percent below 1990 levels by 2050. The authors claim that the central purpose in writing this book is to elevate solutions whose time has come into general consciousness and government action at all levels.

The truth of climate science is unstoppable. Climate change is not abstract and we can no longer look away. The scientific evidence is overwhelming and the very survival of future generations is at stake. The book is a call to action aimed at ordinary people.

It is time for ordinary people who understand this crisis and love their children to demand that their governments stop fossil fuel subsidies, apply a carbon tax on fossil fuels, and lead their nations in implementing the planet-healing Game Changers outlined in this book.

Both Elizabeth Woodworth and Peter Carter are climate activist colleagues. I was pleased when asked to provide a review of Unprecedented Crime prior to its release. The book is a must read. Available on Amazon.