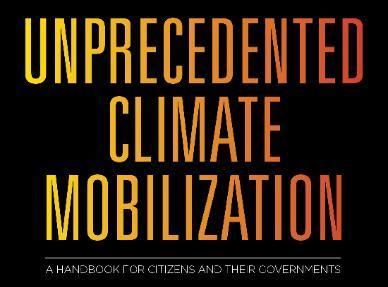 Unprecedented Climate Mobilization is the title of a book just released by authors Elizabeth Woodworth and David Ray Griffin. Although I’m pleased with the launch of the pan-Canadian framework for clean growth and climate change, it falls far short of the kind of climate action needed to keep our world habitable for future generations. This book is a call “for society to mobilize at every level….The evidence of the need for a global climate mobilization is overwhelming,” says Peter Carter, the Director of the Climate Emergency Institute.

(Note: The remainder of this article features excerpts and key concepts from the book.)

I had the privilege to review and critique Unprecedented Climate Mobilization prior to its release. I provided this inside-the-cover blurb:

The accelerating rate of global warming requires an urgent response that far exceeds the level of commitment shown by world leaders to date. The gap between climate change and climate action is widening. This book helps us to confront an unprecedented emergency that requires dramatic action — a World War II like mobilization. ~ Rolly Montpellier, Editor for Below2C

The Imperative of All Time

Climate mobilization has become the “imperative of all time”. The warming of our planet is now in overdrive. 2016 will go down as the hottest year on record, besting 2015, which bested 2014.

The IPPC 2007 4th Assessment Report stressed that global emission must be on the decline by 2015. Global mobilization is imperative even for a 2°C limit and immediate mobilization is needed in order not to exceed 1.5°C.

And yet the Paris Agreement does nothing “that will put global emissions on course for 1.5°C or 2°C.” In fact, the “combined emissions targets of world governments …would result in an increase in global emissions by 2030.” It has become crystal clear that governments and world leaders cannot and will not solve the climate crisis. Woodworth and Griffin are right. Society needs to mobilize at every level.

The world must mobilize to force governments to stop pushing fossil fuels on the world and to stop destroying the planet for all future generations.

Leadership Must Come From Everywhere

“United action is inconceivable without a common goal and a plan that will unite everyone for the public good,” say the authors. The book emphasizes that nothing short of a WWII-like mobilization will be successful in slowing and stopping the climate threat.

The idea that we can stop the rise of carbon emissions gradually or incrementally “is delusional”. The time for gradualism is over. We have entered an era of consequences, a term used by Churchill as the forces of war were gathering in Europe in the late 1930s.

“The battle to implement a full climate mobilization — the only timely response remaining to head off global warming — will be played out all around the world,” according to the authors. And we have the know-how. And we have the technology. But do we have the willpower to make this happen? The answer is YES. And there is no other choice.

The atmosphere on which we all depend is in grave danger, and we must address this danger as though our lives depended on it — because they do. ~ Dr. Jill Stein, US Green Party Leader

I highly recommend Unprecedented Climate Mobilization as a must-have. It will become your guide and your handbook for building the climate effort of the next few decades.

Elizabeth Woodworth is a writer on climate change science and activism publishing on Global Research. She is the co-producer of the COP21 video A Climate Revolution For All. She is author of the popular handbook on nuclear weapons activism, What Can I Do? and the novel, The November Deep. For 25 years, she served as head medical librarian for the BC Government. Elizabeth holds a BA from Queen’s and a Library Sciences Degree from UBC.

David Ray Griffin is Professor of Philosophy of Religion and Theology, Emeritus, Claremont School of Theology and Claremont Graduate University (1973-2004). He is Co-Director, Center for Process Studies. He is author of Unprecedented: Can Civilization Survive the CO2 Crisis? He edited the SUNY Series in Constructive Postmodern Thought (1987-2004), which published 31 volumes. David has written 30 books, edited 13 books, and authored 250 articles and chapters.