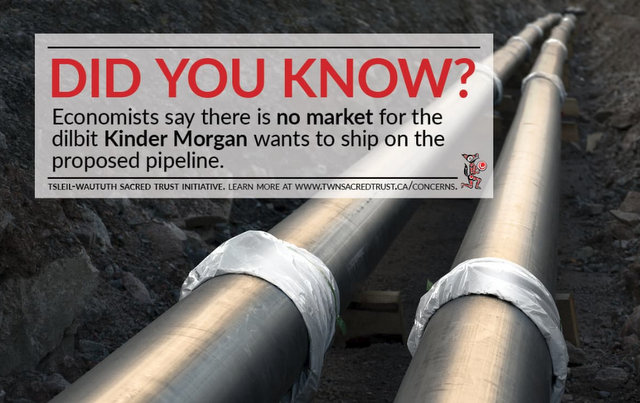 While Trudeau and the Liberal government offer up slogans to justify why the Kinder Morgan pipeline “must be built”, a chorus of thoughtful commentators have recently provided compelling evidence that the economic case for tar sands expansion and Kinder Morgan twinning is simply not there. 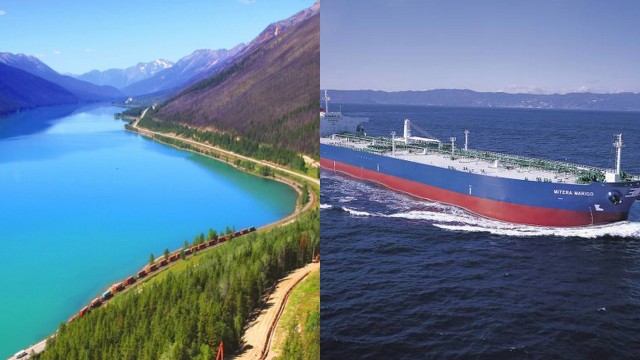 It should give all Canadians serious pause that seven major international oil companies have recently voted with their feet – selling or rolling back their tar-sands investments. Simply put, the poor economic outlook for the tarsands “helps explain why, in the recent past, oil giants such as Exxon-Mobil, Conoco-Phillips, Royal Dutch Shell, Total S.A., and Norwegian oil company Statoil have abandoned gargantuan bitumen deposits in western Canada and/or taken billion-dollar write-downs, to the howls of shareholders,” writes Paul McKay in the National Observer.

The bottom line: Alberta’s low-grade tar sands heavy oil is expensive to get out of the ground, expensive to upgrade to the quality of conventional sweet light crude and expensive to get to market.  The major oil companies have done their homework and decided there are better bets elsewhere.

The titles of some of the spate of recent articles (all recommended reads) speak volumes to the economic concerns they examine:

In a complementary piece, Anderson looks at the recent Alberta-BC tiff: “Sorry Alberta, BC Will Not Pay for Your Bungling; Pipeline is a desperate, dangerous and doomed bid to fix decades of resource mismanagement.”

Paul McKay takes a slightly different angle looking at changes in oil economics brought on by the fleet of 750 much larger capacity oil tankers and their impact on tarsands competitiveness: “The fatal flaw of Alberta’s oil expansion.”

In another article published last week, McKay demonstrates that the demand for oil in China, India and Europe, (the only major markets where oil demand is still rising) are already being lined up and filled primarily by recently commissioned Eurasian pipelines and tankers, at prices much lower than the tar sands could ever compete with.

A central underpinning of these other pieces is the analysis last September by Jeff Rubin, author of the The Carbon Bubble and chief economist (1991-2009) and chief strategist (2007-2009) for CIBC World Markets. In his brief: Evaluating the Need for Pipelines: A False Narrative for the Canadian Economy, Rubin demonstrates that the highest prices for bitumen are actually obtained right here in North America because of the concentration of heavy oil refineries along the US Gulf coast. Oil Change International came to the same conclusion in its 2016 piece Tar Sands: The Myth of Tidewater Access.

That’s the reason that none, yes none, of the current 300,000 barrels per day of oil from Alberta pumped through the existing Kinder Morgan pipeline to its terminus in Burnaby actually goes to Europe or China or India. The tankers all go down the coast to refineries in the USA.

Rubin points out that the US shale producers (frackers) can produce a higher grade of oil at a much lower price than the tar/oilsands. Plus ramp up time is much shorter and capital investments are much lower.

So what about the Notley-Trudeau narrative?

Notley, Carr, McKenna and Trudeau’s claims of economic gain are based on a report done in 2015 for Kinder Morgan.  Andrew Nikiforuk recently reported on the wide-spread criticism of the report as both inaccurate and out of date.

For example, the economic gain assumes: a Canadian dollar at par with the US between  2015 and 2038 (the dollar currently stands at 78 Cents US); no other bitumen pipeline would be built in the next 20 years (Keystone XL and Line 3 have been approved); and oil prices would be around $100 a barrel (currently around $60), to name just three.

Nikiforuk quotes energy expert David Hughes, a geologist who worked for the Canadian federal government for 32 years in his conclusion: “The U.S. is not unfairly discounting Canada’s oil and no Asia price premium exists….The construction of the Line 3 expansion and Keystone XL pipelines, with the Trump administration’s support, will allow access to the highest prices available and provide surplus export pipeline capacity. Politicians knew this information, or should have known it, when Trans Mountain was approved in November 2016.”

“There is no business case for an expansion of Alberta’s oilsands on the scale needed to justify the Keystone XL and Trans Mountain export pipelines because of one bare fact: there are zero foreign buyers who today will commit to decades-long purchase contracts for unrefined bitumen at a fixed price near US$80 per barrel.” ~ Paul McKay

McKay points out that “The Notley/Trudeau tag team, of course, would not put it this way. They’ve deployed a sly lexicon of euphemisms to help sell what can likely never be sold to actual foreign oil purchasers. A 40 per cent oilsands expansion is solemnly christened a “hard cap”, in the manner of two drunks who vow to stay sober once their annual booze binge hits that higher limit.”

“Dirty bitumen becomes a “product” or a “resource.”  How sanitary. Blowing a hole in Canada’s national carbon budget as pledged under the Paris climate agreement becomes a “nation-building” crusade. A tax to help cut carbon pollution is a brave, virtuous policy—but only if oilsands output can accelerate, and the tax rate is carefully calibrated to not put a dent in that. Fossil producers must pay royalties to help a debt-laden province—but are allowed to pay in barrels of raw bitumen instead of cash.”

He also points out that the explosion of shale gas in the USA “created a new normal which is likely to last for the foreseeable future, and spell disaster for any future Alberta tar/oilsands expansion. Like their competitors in the Persian Gulf, American shale oil producers can drill deposits quickly and cheaply, then tap or cap them depending on the transient price of oil. Some can survive at US$20 per barrel. Most need $40 to justify pumping and selling for a profit.”

McKay concludes that “There is no business case for an expansion of Alberta’s oilsands on the scale needed to justify the Keystone XL and Trans Mountain export pipelines because of one bare fact: there are zero foreign buyers who today will commit to decades-long purchase contracts for unrefined bitumen at a fixed price near US$80 per barrel.”

What A Strong Climate Plan Is and What It Is Not

Treat the Climate Crisis Like It’s a Damned Emergency

Circularity and The Race to Zero. Click on image to Register.

Below2C is a proud partner to the Circularity and the Race to Zero online event. Our third Exponential Climate Action Summit will focus on the challenges, opportunities, and creative solutions regarding circularity and resource efficiency.

Join us for the Fridays For Future Global Climate Strike. Click on the image for more information.