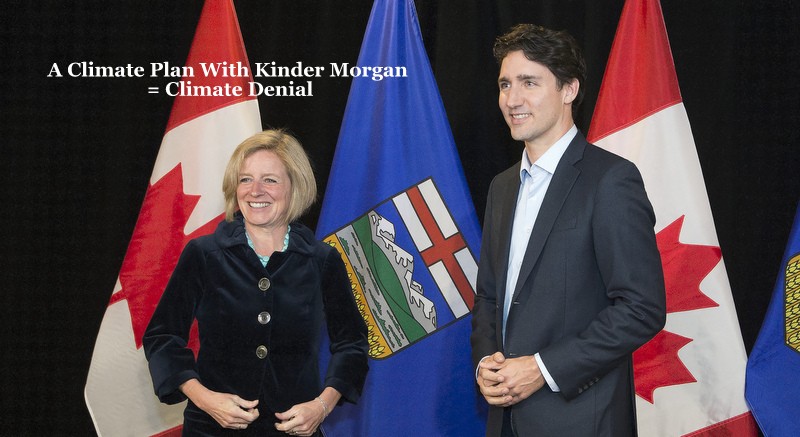 Prime Minister Justin Trudeau has said repeatedly that his climate plan will eventually wean Canada off its dependence on fossil fuels. But first we need the Kinder Morgan Trans Mountain pipeline to get Alberta oil to new markets according to Trudeau. “It was absolutely part of the equation….and an unavoidable element of a national climate change plan,” he insisted during his recent interview with the National Observer’s Sandy Garossino.

In the following article, Aurore Fauret of 350.Org debunks Trudeau’s twisted logic by showing why Canada’s climate plan can’t be traded for Kinder Morgan. Her opinion piece was first published in ricochet.

It might seem a bit much to call Justin Trudeau and Rachel Notley climate deniers. Both believe in climate change, and they believe that we have to take action on it. But if climate denial is the act of denying the implications of the hard, immutable facts of climate science, they fit the bill.

Unlike other political challenges, climate change demands both a complete and urgent response. Once a glacier melts, it’s gone. Once the sea level rises over the shorelines of a Pacific island, there’s no getting it back.

Climate science tells us that we have hard limits: a carbon budget; the need to keep oil, coal and gas in the ground; the necessity for Canada to have a strategy to manage the decline of our fossil fuel reserves. Whatever you call it, it all adds up to the same thing. We need to act now, and Canada’s actions need to respect the clear science that tells us we can’t build new fossil fuel projects. If we don’t don’t act urgently or drastically enough to limit global warming to the 2C threshold that scientists have identified, we fail.

And, make no mistake, if we follow Justin Trudeau and Rachel Notley’s climate plans, especially the part that requires building the Kinder Morgan pipeline, we will fail.

Canada is on track to miss our own climate targets, targets that themselves don’t add up to doing our part to meet the 2C limit we agreed to in Paris.

The Alberta climate plan, a 2015 piece of policy that Trudeau has called the linchpin of Canada’s climate action, was a great first step for the province. But it’s a first step from a province that spent the better part of the past four decades denying climate change and working hand in hand with Big Oil to derail action on the issue. So it’s far from a complete departure from business as usual.

While the Alberta plan does place a cap on tar sands emissions, that cap is far too high. On paper, it allows for a nearly 50 per cent increase in emissions from tar sands production alone. This from Canada’s fastest growing source of emissions. And it’s the main reason we’re nowhere near on track to hitting our 2020 and 2030 climate targets.

And that’s assuming the cap is actually enforced. Right now, the governments of Canada and Alberta are reviewing the Teck Frontier project, the largest open-pit tar sands mine ever proposed, big enough to blow that cap. On top of that is a suite of exemptions built into Alberta’s emissions cap that make it look less like a hard climate policy and more like window dressing on production growth for Canada’s biggest polluters.

Canada is an Exporter of Emissions

It’s not just the Alberta Legislature where Big Oil is getting a break. In January, the Canadian government removed the few teeth remaining in its carbon pricing scheme by essentially exempting major polluters — like tar sands operators — from actually having to pay the tax. Earlier this month, Environment Minister Catherine McKenna doubled down on that when she gave the same polluters an out from proposed climate considerations in Canada’s new Environmental Assessment regime, specifically for in-situ tar sands projects.

If fossil fuels are the drug our planet is trying to kick, Canada is one of the biggest dealers.

That’s not all. Both Canada’s and Alberta’s climate policies ignore the fact that the country is a net exporter of emissions. If fossil fuels are the drug our planet is trying to kick, Canada is one of the biggest dealers. In 2015, we extracted nearly 1.2 billion tonnes of CO2 emissions in Canada, only around half of which were actually burned in the country. And make no mistake, the Kinder Morgan pipeline will only make this problem much, much worse.

Right now, Canada is on track to miss its own climate targets, targets that themselves don’t add up to doing our part to meet the 2C limit we agreed to in Paris. And our governments are ignoring the fact that we’re home to a fossil fuel industry with an enormous climate impact. Remember that, the next time Justin Trudeau and Rachel Notley tout their respective climate plans.

Let’s acknowledge it: climate change is one of the hardest political issues our world has ever had to face. There are no easy political solutions, but on climate and pipelines the math is clear. So while Big Oil may support Notley and Trudeau’s climate plans, science doesn’t — and physics isn’t known for its ability to bend to political arguments.