The medical profession has sounded the alarm on the potential health risks of climate change. And one demographic in particularly is vulnerable to the threats arising from a warming planet. Climate change disproportionately affects children. A recent paper in the  Pediatrics journal estimates that children will bear 88% of the burden of climate-related disease.

When the world gets warmer, the results impact real people’s lives. It’s a truth that too often gets lost amid data points and science jargon, late-breaking news, and heated political handwringing. But we must not let it.

Real people just like you (and us!) are suffering right now because of our changing climate. And some of us are unfairly impacted more than others.

Those with modest incomes. The elderly. And worst of all, children. 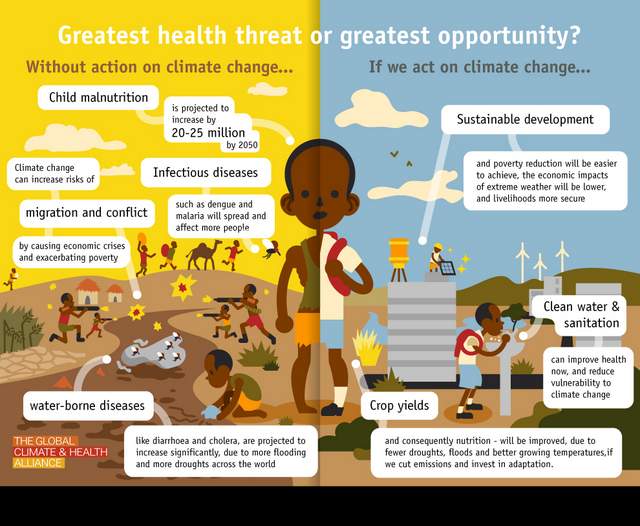 Kids face unique health burdens because of climate change, according to the American Academy of Pediatricians (AAP), including “the broad effects of weather disasters, exacerbated allergic and asthmatic diseases, food and water insecurity, and heat-related deaths.”

Children are in the crosshairs for a few reasons. Their immune systems are still developing, leaving their rapidly growing bodies more sensitive to disease and environmental pollutants. They breathe, eat, and drink more for their size than adults, spend more time outdoors, and may not be emotionally mature enough to understand the things happening around them.

Rising global temperatures decrease air quality, in part, by increasing the formation of ground-level ozone, the main ingredient in city smog. Exposure to high levels of ozone can lead to shortness of breath, wheezing and coughing, chest pain, temporary decreases in lung function, and lower respiratory tract infections in children.

And that’s before you consider other air quality concerns from this crisis, from the more-than-a-billion cars on the road around the world, most burning gasoline, to powerful wildfires, like those that devastated parts of the American West in 2018.

Children are especially vulnerable to both the immediate and long-term impacts of climate-fueled natural disasters.

The imminent threat to children from extreme weather is clear: They’re smaller and less physically capable than adults. They spend more time outside, increasing their exposure to dangerously high heat and more. They often rely on others for decision-making and care, leaving them especially vulnerable during and immediately after emergencies like flash flooding.

But they also can experience unique mental health concerns.

Surviving a dangerous major hurricane or other extreme weather event and living with the damage it leaves behind can take a very real toll on anyone’s well-being – especially a child’s.

And depending on their age and development, children may not have the emotional or cognitive tools to understand less tangible climate concerns, leading to extreme distress and other psychological effects.

“The social foundations of children’s mental and physical health are threatened by the specter of far-reaching effects of unchecked climate change, including community and global instability, mass migrations, and increased conflict,” AAP notes.

At the same time, the very carbon pollution that is driving the climate crisis may itself also be making our food less nutritious, jeopardizing the overall health of children all over the world.

When grown under the CO2 levels expected by 2050, many common crops see reductions of protein and key nutrients like iron and zinc anywhere from 3-17 percent, according to recent research featured in the journal Nature. And if emissions continue at the current rate, in many countries, the consequences of these nutrient declines could be dire.

Zinc deficiencies can dramatically impair immune system function, and cause diarrhea, delayed sexual maturation, and eye and skin lesions. Meanwhile, an iron deficiency can lead to muscle weakness, immune system and cognitive problems, and headaches and dizziness. It can also result in anemia.

As for protein: “Few nutrients are as important as protein,” Healthline explains. “Protein is the building block of your muscles, skin, enzymes, and hormones, and it plays an essential role in all body tissues. … Protein deficiency can affect almost all aspects of body function.”

The importance of a diverse, nutrient-rich diet to the healthy development of children cannot be overstated.

As mentioned, children’s still-developing immune systems leave them susceptible to many types of sickness and infection. They simply aren’t always able to fend off illnesses that might give a healthy adult far less trouble. And the climate crisis is exacerbating many of these diseases, bringing them to regions they’ve never previously been or setting up the conditions for them to thrive.

There are two major categories of climate-related disease: water-borne and vector-borne.

Water-borne diseases spread through bacteria and other pathogens in the water we drink or bathe or even play in. They include some of the most widespread and terrible illnesses that people endure, including cholera, typhoid, and dysentery, which infect millions and cause hundreds of thousands of deaths each year.

The EPA reports that the incidence of water-borne illnesses, like gastroenteritis and infectious diarrhea, increases when outdoor temperature rise or immediately following severe storms or floods. That makes a lot of sense when you consider that extreme weather can inundate and lead to a breakdown of sanitation and sewer systems – and that many bacteria flourish in warmer conditions.

Children are especially susceptible to these types of illness. Approximately 1.5 million child deaths per year globally are attributed to infectious diarrhea, with children in developing nations disproportionately affected.

And the same conditions that allow these bacteria to prosper help to foment the other type of climate-related disease.

Warm standing water left behind by excessive rainfall or storm surge flooding creates more and more habitats that are friendly to “vectors,” typically a biting insect like a mosquito or flea, or a parasitic arachnid like a tick. Vectors carry infective pathogens like viruses and bacteria, and transmit diseases or parasites from one animal to another.

And with average temperatures climbing and winters becoming more mild and lengthening in many places, the ranges for these vectors are also growing.

That’s why diseases like malaria and cholera that were once on the way out could now make a comeback. It’s why the Zika virus that threatens babies’ brains is reaching more parts of the world.

These diseases are becoming more common in the developed world, but they’re hitting developing nations hardest. Modest-income communities, however, often lack the resources to effectively prevent and treat them. Which means that millions already struggling just to get by are now increasingly struggling to stay healthy.

And at the same time, the very fossil fuels driving the climate crisis also present direct dangers to health.

Most people have heard about “fracking” – the process of hydraulic fracturing used to extract natural gas. But most people haven’t heard about the dangerous chemicals like benzene that fracking companies pump right into the earth to get the gas.

“Given the profound sensitivity of the developing brain and the central nervous system, it is very reasonable to conclude that young children who experience frequent exposure to these pollutants are at particularly high risk for chronic neurological problems and disease,” the Center for Environmental Health’s Ellen Webb, a researcher on the neurological and neurodevelopmental effects of chemicals linked to unconventional oil and gas operations, told the Guardian last year.

And that’s just the start. The carbon dioxide driving climate change isn’t the only pollutant billowing from power plant smokestacks around the world.

Lead. Sulfur dioxide. Ozone. You name it. Exposure to these pollutants can be particularly damaging to both pregnant women and very young children.

When pregnant moms breathe in or drink down these often-invisible chemicals, it goes right to their babies – right when they’re at their most vulnerable. And the danger doesn’t end once they’re out of the womb. The most critical time for brain development for children happens through the first six years of their lives.

Studies show links between fossil fuel pollution and neurological impacts no parent wants for their child. If you don’t want to take our word for it, take the National Institutes of Health’s:

“By impairing children’s health, ability to learn, and potential to contribute to society, pollution and climate change cause children to become less resilient and the communities they live in to become less equitable. … Global pediatric health is at a tipping point, with catastrophic consequences in the absence of bold action.”

WHAT YOU CAN DO

It’s clear that the impacts of the climate crisis could have unique, serious, and potentially alarming repercussions for the health of children all over the world – and in turn, the very future of our planet.

“Given this knowledge, failure to take prompt, substantive action would be an act of injustice to all children,” AAP concludes. “A paradigm shift in production and consumption of energy is both a necessity and an opportunity for major innovation, job creation, and significant, immediate associated health benefits.”

The good news is that there’s plenty we can do to both reduce our contribution to future climate change and protect children’s health and well-being.

Sign up to receive emails from Climate Reality now

This article was first published in the Climate Reality Project blog.