The IPCC (Intergovernmental Panel on Climate Change) has released its most frightful and alarming report yet — Special Report on Global Warming of 1.5ºC. The message is blunt: humanity is on the verge of a climate emergency which requires emergency climate action to avoid catastrophic climate change.

The following consists of excerpts from Elizabeth May’s impassioned and rousing speech during the emergency debate on climate in the House of Commons a week ago.

“Humanity is conducting an unintended, uncontrolled, globally pervasive experiment, whose ultimate consequences could be second only to global nuclear war.”

Those words were the opening sentence of the consensus scientific report from the Toronto conference in June 1988, when this country was in the lead on climate change, working with the World Meteorological Organization and the United Nations Environment Programme. The warnings from science were clear then and they remain crystal clear now.

Where is the Courage?

I am increasingly drawn to the conclusion that our biggest problem is the short-term mindset that preoccupies political parties, not just in Canada but around the world. Where is the bravery? Where is the courage? There are all those people surrounding every politician saying, you cannot win an election by telling the public the truth. You cannot tell people they are going to have to stop using an internal combustion engine and leave fossil fuels in the ground. Do you want to tell them that? That is not going to be politically popular.

If we are grown-ups in this place, then we should face the science clear-eyed with a serious intent that acknowledges we cannot afford to hit the snooze button on this report because this time the scientists are telling us that 1.5° is far more dangerous than we thought it was.

We are entering the Anthropocene, where what we do has a bigger effect than anything else on life on earth. In the Anthropocene, now we are being told that we as homosapiens, the clever species, the smart ones, have at most 10 to 12 years to ensure that we stop greenhouse gas emissions rapidly, ramp up sequestration to protect every forest, and replant as many forests as possible.

Parts of this report could have been much worse. We know this from those in the IPCC negotiations. Bear in mind that this is the Intergovernmental Panel on Climate Change. Yes, it is composed of scientists, but they were appointed by government and this is a negotiated document. Pressure from the United States and Saudi Arabia led to removing parts of the report that would have warned us further. If we miss the 1.5° mark, it is bad, and that is in the report, but if we hit 2°, it is much more dangerous.

They took out the part about runaway global warming. We do not know when we will hit a tipping point of irreversible self-acceleration where the ultimate consequences are not about bracing for bad weather, but about bracing for millions of species going extinct. Even if humanity can hang on now, can we imagine hanging on to human civilization in a world with a 4°, 5°, 6°, or 7° rise in temperature? The answer is no.

We have one chance only 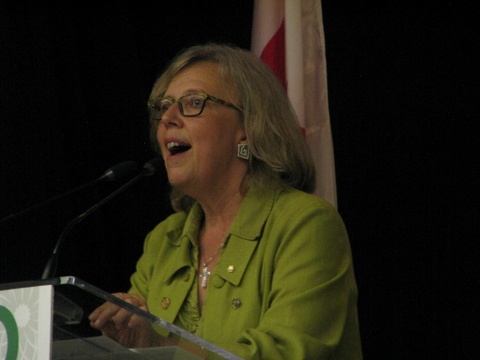 We have one chance, one chance only, within which all the nations on Earth agree that we meant what we said in Paris: that we must hold the global average temperature increase to no more than 1.5°. This IPCC special report contains good news because it says we can do it. It says there are no physical, geological or geochemical conditions of planetary existence, technical or economic, that will prevent us from achieving the goal of protecting our children’s future. Not future generations in the hypothetical, but the children who are here now. I am talking about the grandchildren I tuck into bed at night, those children, not hypothetical children. (Image: Laurel Russwurm, Flickr)

All of us know those children. They are our children. We have one chance to ensure that in their natural lifespan they enjoy a hospitable biosphere that has sustained humanity since we first got up and walked on two legs.

It’s not too late

The issue tonight is not to debate Canada’s current carbon plan, Canada’s current climate plan. This is not a status quo debate. We should not be scoring political points because one party did this and another party did that. We should be here as humanity, human beings, elected people for our constituencies who know full well that if we do not change what we are doing as a species, we will face an unthinkable world. The good news is we still have a chance to save ourselves.

Trudeau needs to have a “my fellow Canadians” moment

In this time and age, we need to face the facts just as squarely. We need to tell Canadians that we have hope. Do not despair or think it is too late. They should not turn away from the IPCC reports. They should not be afraid because we cannot breathe in British Columbia in the summer because of forest fires. They should not give up. We will rally and marshal every small town, every big city, every Canadian group, Rotary Clubs, church group. And we will tell those naysayers who think that climate change is about a cash grab that they are in the way of our future and that they must get out of the way.

We also, sadly, must say to our own Minister of Environment that it is not true that we cannot change our target for five years. The Paris Agreement says clearly that any country can replace its own target anytime. The IPCC report has said to us as a country that our target is approximately 50% too little. We need to do twice as much. I know that is hard, but to save the lives of our children, what wouldn’t we do? Why will we not rally around the call that we go to COP24 and say we are not going to wait five years? It is an unthinkable thing what the minister has said to us. She said we are going to wait until 2023. Read between the lines. It is what she just said. We must go to the next climate negotiation as leaders in the world with the target the scientists have told us we must have. Then we must stand up and challenge the others by asking where is their target? Where is their goal?

Because we are not prepared to tell our children we are a failed species. We are not going to do that because we are responsible human beings. We are Canadian parliamentarians and together we can achieve the pathway that has been put before us by world science.

The report finds that limiting global warming to 1.5°C would require “rapid and far-reaching” transitions in land, energy, industry, buildings, transport, and cities. Global net human-caused emissions of carbon dioxide (CO2) would need to fall by about 45 percent from 2010 levels by 2030, reaching ‘net zero’ around 2050. This means that any remaining emissions would need to be balanced by removing CO2 from the air ~ IPCC Press Release.