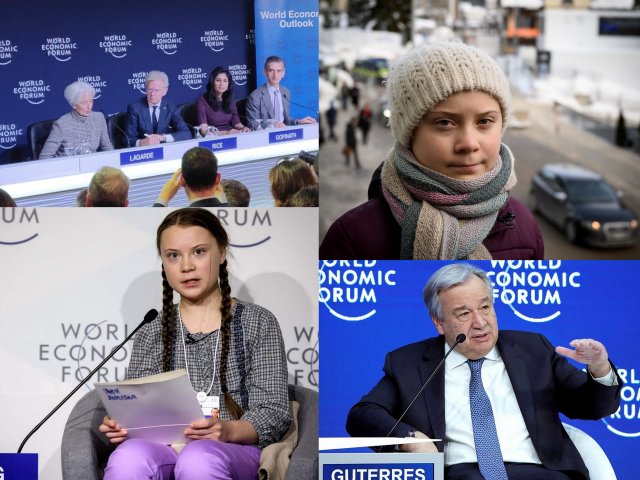 The disparity in climate speak at Davos 2019 has left me wondering if humanity is in outright climate paralysis.

This year more than ever, Davos resounded with warnings to take serious action on climate change before it’s too late. For the first time, climate change was the talk of Davos. There was even an attempt to shine the spotlight on climate with an opening award to Sir David Attenborough for his lifelong contribution to environmentalism. Even the profit-obsessed Davos elite cannot ignore global climate developments — extreme weather, climate litigation, the call for action.

But talk is cheap. Real change needs real action, leading TheGuardian to highlight “the yawning gap between rhetoric and reality….between what is said and what is actually happening.”

Credit: collage by Below2C from screenshots of YouTube Davos videos

The Voice of Davos

For the most part, much of the climate rhetoric of Davos participants consisted of variations of previous years’ calls for action. Their climate speak was cautious and couched in general statements of good intentions. “The new mantra is that restricting the increase in temperature to 1.5C above pre-industrial levels would be a win-win – good for the planet and good for the economy,” reports TheGuardian.

The rhetoric can be convincing but what is lacking is the conversion to action. In a one-hour panel discussion of the Climate Leadership Panel at World Economic Forum 2019, panelists shared their observations on the climate. Following is a medley of comments/ideas from the video discussion:

The Voice of Youth

In stark contrast to the Davos elite, Greta Thunberg’s climate speak is about urgency, an urgency that calls on decision-makers to “panic”. The directness, simplicity and clarity of her words are mobilising youth around the world. She tells it like she sees it. She is bold, forceful and unplugged. Her words are sounding alarm bells around the globe. And in Davos, her words shocked business leaders, politicians and world leaders. This is a sampling from her talks in Davos:

“I’m here to say that our house is on fire.”

“Some people say that the climate crisis is something that we all have created. But that is not true because if everyone is guilty, then no one is to blame. And someone is to blame.”

Greta rejects the notion that “we are not doing enough to fight climate change. Because to ‘not do enough’, you have to do something. And the truth is we are basically not doing anything.”

“I want to challenge those companies and those decision-makers into real and bold climate action. To set their economic goals aside and to safeguard the future living conditions for humankind.”

“Some people, some companies and some decision-makers in particular have known exactly what priceless values they have been sacrificing to continue making unimaginable amounts of money. And I think many of you here today belong to that group of people.”

IT’S TIME TO WARRIOR UP

Related articles…
A Terrifying Twelve Years: Sounding The Climate Alarm Bells
A World Where Leaders Are Childish and Children Are Leaders