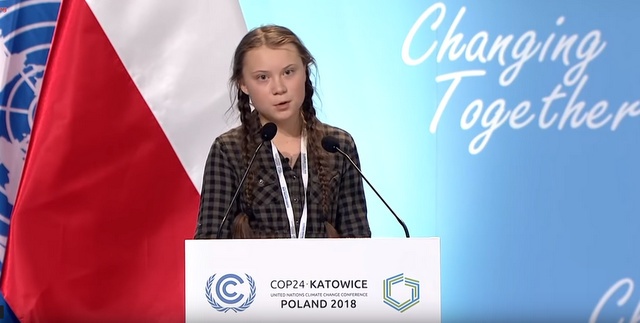 In this post, Silver Don Cameron of The Green Interview highlights the emergence of a worldwide youth climate movement. The rise of youth is being spearheaded by Greta Thunberg, Sweden’s 15-year old climate activist. Greta claims that children are emerging as leaders while world leaders continue to play childish climate games that are compromising their future.

“We have not come here to beg world leaders to care,” declared 15-year-old Greta Thunberg of Sweden at the COP 24 conference in Katowice, Poland. “They have ignored us in the past and they will ignore us again. We have come here to let them know that change is coming whether they like it or not. Since our leaders are behaving like children, we will have to take the responsibility they should have taken long ago.”

Thunberg, who was unknown last July, has been on strike outside her school every Friday since late August demanding action on climate change and tweeting under the hashtag #FridaysForFuture. The protest has spread across Europe and around the world, and led to her invitation to speak at COP24.

Thunberg is only one. Stella Bowles, 14, was disgusted by the fecal pollution in Nova Scotia’s LaHave River, and shamed governments into organizing a $15 million cleanup. (We have a Green Interview with Stella in production for release later in 2019.) Rupert and Franny Yakelashek are even younger, and they’re among the most powerful environmental rights advocates in western Canada. All three are included in Starfish Canada’s Top 25 Environmentalists under 25. In the US, in the case of Juliana vs. United States, 21 youth plaintiffs are suing the US government for endangering their future through its support for fossil fuel production and consumption. Today, in fact, there are more than 1000 such lawsuits underway in 24 countries. Among the most recent is a suit filed by Environment Jeunesse in Quebec against the government of Canada.

The father of this explosion of children’s lawsuits is a laughing and relentless lawyer in the Philippines, Antonio Oposa Jr. and its mother is an incisive law professor, Mary Christina Wood of the University of Oregon.  Both are guests on The Green Interview. We’ll be discussing the children’s lawsuits in my online/on-site Cape Breton University course, Green Rights: The Human Right to a Healthy World, which starts January 9.  For course details, click here — or listen to my discussion of the course with Jo-Ann Roberts on the Green Party of Canada’s podcast, released today. You can join the course from anywhere on earth.

The Green Interview with Oposa is also included in my book Warrior Lawyers, which is now available not only from Amazon, but also from Barnes and Noble, and soon from Chapters/Indigo and other on-line booksellers. You can buy it at the CBU Bookstore (who will ship it to you) or from the online store at my own website.  In addition, your local library or independent bookstore can now order it from any supplier that deals with Ingram distribution.

[Best Wishes for 2019]. Let us be humble and inspired. Let us give each other — and the planet — the greatest gift of all: a world in which the adults become as strong, smart and determined as the children already are.

Related articles…..
Support For Youth #ClimateStrike Is Soaring In Canada
Can Litigation Save Us From Climate Change?