In June 2018, the Greenhouse Gas Pollution Pricing Act achieved Royal Assent and became law of the land in Canada. All provinces and territories must have a carbon pricing policy of at least $20 tonne by January 1, 2019, rising $10 per tonne each year until 2022. The backstop policy allows flexibility for provinces to have carbon taxes or an equally stringent cap and trade system. How equivalency will be determined is unclear. In jurisdictions that do not have carbon pricing policies, the Federal Backstop Carbon Pricing Policy will kick in on April 1. 2019. 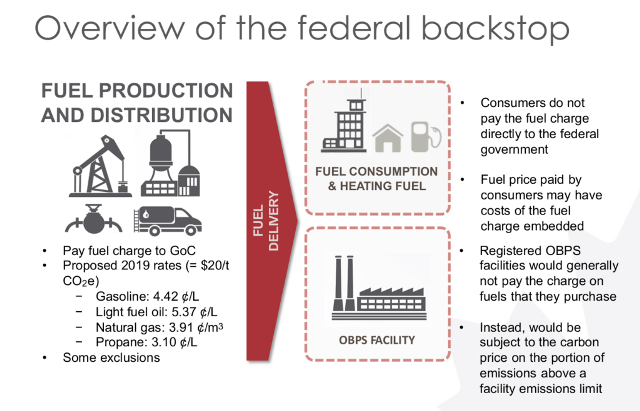 There are two elements to the federal carbon pricing policy:

1. A charge on fossil fuels that is generally payable by fuel producers or distributors, with rates for each fuel that are equivalent to $10 per tonne of carbon dioxide equivalent (CO2e) in 2018, rising by $10 per year to $50 per tonne CO2e in 2022. The carbon fee for the federal backstop policy is revenue-neutral. The revenue will go directly back to the people in jurisdictions without carbon pricing. And the revenue will be recycled back to the citizens in their income tax returns under line 449 “climate action incentive”. CCL also recommends the price be economy-wide and rise past 2022.

2. Businesses and industries that qualify, will enroll in an Output-based Carbon Pricing System. They will pay a carbon price based on their emissions intensity relative to a best in class of their industry and surplus credits will be traded. This system will send a market signal because good actions are rewarded. This component of the act protects emissions-intensive trade-exposed industries from trade pressures and carbon leakage. However, it may not be stringent enough. CCL recommends that the carbon price should be economy-wide and thus the Output-Based Pricing System should be temporary, and ultimately replaced with Border Carbon Adjustments.

As a guest on CBC’s The Current with Anna Maria Tremonti, Cathy Orlando (Canadian Director for Citizens’ Climate Lobby) called yesterday a good day for Canada. “Today is a good day,” said Orlando. Canada is now going down a path that will protect my three daughters, all children, all life from climate breakdown. It’s a policy that 3,508 economists in the U.S. including 27 Nobel prize-winning economists actually support. So today is a good day.”