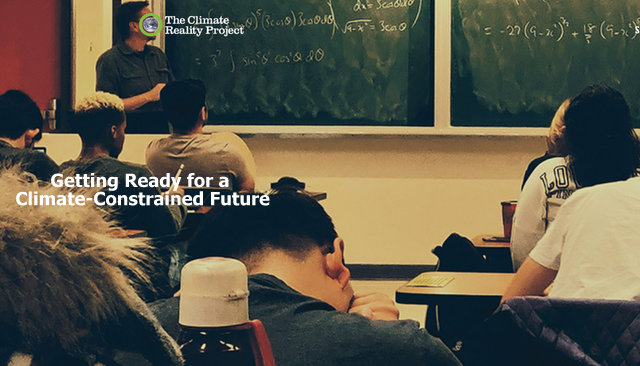 I have four grandkids ranging in age between 9 and 14 years old. I often think about what their future will be like. Many adults prefer to withhold the truth about climate, to coddle and protect youth from the reality of a climate-constrained future. But ignorance is not a skill set, it’s a hindrance. It’s a condition.

Living in a Climate Constrained Future

Never before has global youth faced such a daunting future. Our children and grandchildren will inherit a chaotic world with unprecedented environmental challenges. To them we thrust the responsibility of saving the planet from collapse because we adults have failed to do so. Plus they must acquire the knowledge and skill set to fill the jobs of the future and thrive in an intensely competitive world.

As a Climate Reality leader I’m pleased to feature the following article first published in the Climate Reality blog. The article focuses on the importance of climate science education and the opportunities that will surface in the green clean economy of the future.

Helping Kids Prepare for their Future

As we continue to move away from fossil fuels toward 100 percent renewable energy, we’ve seen some trends emerge, particularly regarding the jobs that will support the new clean economy.

In 2019, kids and young people need to not only understand the dangers of the climate crisis so they can be prepared for them, but also build the knowledge and skills necessary to thrive in the future green economy—or risk being left behind. It’s just that simple.

A thorough, rigorous, standards-based climate science education will provide them with the truth about the urgency and harmful effects of climate change, the cognitive skills to not be hoodwinked by the lies and misinformation of climate deniers, and will equip them with the training needed to succeed in the job market of tomorrow—one that will increasingly be made up of clean energy jobs.

According to a new report from E2, the United States added about 110,000 new clean energy jobs in 2018, bringing the total number of Americans who work in clean energy to around 3.26 million.

But by 2030, when many of today’s youth will be entering the job market, this number could be much larger – as many as 24 million new clean energy and low-carbon jobs globally.

Simply put, the clean energy economy is growing, and it demands our attention. Young people need climate science education and training now to help them succeed in tomorrow’s economy. And if we do not provide it, we’re denying them the opportunity for a secure and successful future.

The transition to a clean energy economy is on, and that means jobs. Lots of them. Good and equitable ones too.

The Brookings Institution recently tried to map this out a little better. According to Brookings, the clean energy economy, which hasn’t yet matured, will primarily involve 320 unique occupations in three major industrial sectors: clean energy production, energy efficiency, and environmental management.

Until these industries fully take shape, we need to continue to identify and learn about the rising occupations within them to better understand the specific types of workers, activities, and skills needed in the years to come – and to equip future workers with the skills to support long-term career pathways in them.

The bottom line is that jobs are a key feature in the shift toward a cleaner economy and a greener future.

The clean energy economy is bringing more jobs to the United States, and quickly. This growth isn’t confined to one particular area. Clean energy jobs are being added in every region and state across the country.

There are already more clean energy jobs than fossil fuel jobs, outnumbering them by about three-to-one in 2018, and coinciding with renewables generation beating coal for the first time ever.

For further context, both of these jobs are expected to grow at more than double the rate of the third fastest-growing occupation in the country, home health aides (47.3 percent projected growth).

And these jobs are popping up all around the country, including places you might not immediately expect.

The Natural Resources Defense Council reports that rural communities have recently seen incredible growth in wind energy, solar power, and energy efficiency. In rural regions throughout the Midwest, specifically, the number of clean energy jobs grew by 6 percent from 2015 to 2016, and totaled nearly 160,000 in 2017. The report also notes that across the 12 Midwestern states, about 2.3 gigawatts (GW) of new renewable capacity was added in rural areas in 2017 — a number that “represents the potential output of about 10 million solar panels or more than 1,000 large wind turbines.”

And another good thing about clean energy jobs? They are lucrative, relative to many other types of employment.

The educational requirements for these jobs often vary from vocational training to more advanced studies in the sciences, engineering, and more. But all require a core foundational understanding of the problem and the many facets of its solution. Considering this, what exactly should we be emphasizing and promoting to our kids now?

Knowledge and Training for Tomorrow are Key

If the clean energy economy will involve a large number of new and/or growing occupations spread across multiple industries (clean energy production, energy efficiency, and environmental management), workers will need adequate knowledge, skills, and training to perform them.

How can we prepare today’s youth for these jobs of the future? And how can we ensure that anyone who wants one of these jobs has the opportunity and skills to get it, regardless of their socio-economic circumstances, race, or gender?

The answer is education. Modern and standardized. Formal and fair. Inclusive and fact-based.

All students — from elementary school through high school and college — stand to benefit greatly from learning the truth about our warming planet and also the many possible career pathways into well-paying clean energy jobs open to them.

The transition to a clean energy economy is in full swing. And as we continue to move away from fossil fuels toward 100 percent renewable energy, we’ve seen some trends emerge, particularly regarding the jobs that will support the new clean economy.

Not only are great, well-paying jobs being created every day, they’re popping up all around the country, offering renewed promise to many communities that haven’t had access to the kinds of opportunity afforded by livable wages, safe working conditions, and pollution-free environments.

Are you ready to fight for jobs like these in your community?

Learn more about the value of comprehensive, standards-based climate science education in our new free fact sheet, Climate Science Belongs in the Classroom.

In it, we explain why education is key to turning the tide and creating a safe, sustainable world for generations to come, and offer talking-point tips to share with your friends, neighbors, educators, school boards, and more on exactly why climate science is one of the most important fields of study for young people today.