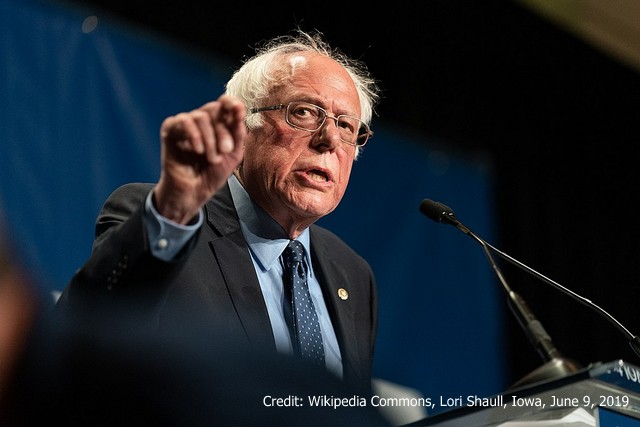 Climate change is rising to the very top of the political agenda both in Canada and the United States as each country enters its next election cycle—Canada in October 2019 and the US in November 2020. Starting in October, Canadians will have the opportunity to attend over 100 all-candidate debates on the environment across the country to rate each political party’s climate plan. And in the US, Bernie Sanders—one of the top contenders for the Democratic presidential nomination—has just raised the climate bar by unveiling a $16-trillion Climate Plan that is “nothing short of revolutionary,” writes Brian Kahn in Gizmodo. (Editor intro)

The following piece was first published in Common Dreams.

Calling the global climate crisis both the greatest threat facing the United States and the greatest opportunity for transformative change, Sen. Bernie Sanders on Thursday unveiled a comprehensive Green New Deal proposal that would transition the U.S. economy to 100 percent renewable energy and create 20 million well-paying union jobs over a decade.

If fossil fuel executives and lobbyists reading Sanders’ plan are scared, they should be.
—Jack Shapiro, Greenpeace

“When we are in the White House,” said the Vermont senator, “we will launch the decade of the Green New Deal, a 10-year mobilization to avert climate catastrophe during which climate change, justice, and equity will be factored into virtually every area of policy, from immigration to trade to foreign policy and beyond.”

The climate crisis is the greatest challenge facing humanity. It’s also our single greatest opportunity to build a just and equitable future.

We are going to create 20 million jobs and an economy that works for all.

It’s time for a #GreenNewDeal. https://t.co/NteQAl2D7M

Sanders’ plan for an aggressive 10-year mobilization to combat the climate emergency comes amid warnings from the international scientific community that global greenhouse gas emissions must be slashed in half by 2030 to avert planetary catastrophe.

Across the world, Sanders noted on his website, there is an overwhelming abundance of evidence testifying to the severity of the climate crisis and the urgent need for bold action.

“The Amazon rainforest is burning, Greenland’s ice shelf is melting, and the Arctic is on fire,” Sanders wrote. “People across the country and the world are already experiencing the deadly consequences of our climate crisis, as extreme weather events like heat waves, wildfires, droughts, floods, and hurricanes upend entire communities, ecosystems, economies, and ways of life, as well as endanger millions of lives.”

To confront the emergency, Sanders’ Green New Deal plan would:

According to the Sanders campaign, the senator’s plan would “pay for itself over 15 years” by forcing the fossil fuel industry to “pay for their pollution,” eliminating fossil fuel subsidies, slashing military spending that is dedicated to “maintaining global oil dependence,” raising taxes on the wealthiest Americans, and more.

We need a president who will face down the greed of fossil fuel executives and the billionaire class who stand in the way of climate action.

I welcome their hatred.

We will enact the #GreenNewDeal and bring the world together to defeat the existential threat of climate change.

“Bernie promises to go further than any other presidential candidate in history to end the fossil fuel industry’s greed, including by making the industry pay for its pollution and prosecuting it for the damage it has caused,” reads the campaign’s website.

“Any serious plan to address climate chaos must start with a ban on fracking and a halt to all new fossil fuel development. Sanders understands this, and he has set the bar for worthwhile climate policy discussion.”
—Wenonah Hauter, Food & Water Action

“And most importantly,” the website continues, “we must build an unprecedented grassroots movement that is powerful enough to take them on, and win. Young people, advocates, tribes, cities and states all over this country have already begun this important work, and we will continue to follow their lead.”

Jack Shapiro, senior climate campaigner with Greenpeace USA, said, “If fossil fuel executives and lobbyists reading Sanders’ plan are scared, they should be.”

“Sanders has talked the talk on climate change from day one of his campaign. This plan shows he’s ready to walk the walk, as well,” Shapiro said in a statement. “At this point in the race, speeches and half-measures don’t cut it.”

“With this aggressive and inspired plan, Senator Sanders has set a clear benchmark for meaningful climate and energy policy in the presidential race and beyond,” said Hauter. “This plan includes the bold action and rapid timelines required to adequately address the magnitude of the climate crisis we face.”

“Most importantly,” Hauter added, “this plan would ban fracking, the toxic, polluting drilling method responsible for almost all oil and gas production in America today. Any serious plan to address climate chaos must start with a ban on fracking and a halt to all new fossil fuel development. Senator Sanders understands this, and he has set the bar for worthwhile climate policy discussion, here and abroad.”