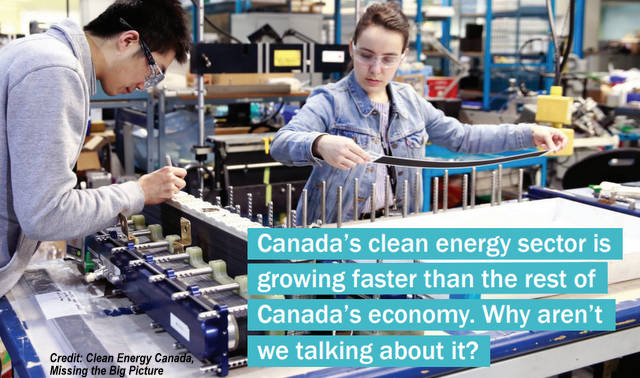 When we talk about energy in Canada, we immediately think of oil and gas and pipelines like the Trans Mountain project. We think of Alberta and its dirty oilsands and we think of carbon emissions. But we’re missing a major part of the Canadian energy picture. We’re missing the clean-energy sector which is booming. The following is part of a Media Release issued by Clean Energy Canada.

A significant part of Canada’s energy sector has been booming in recent years—but has anybody noticed?

Clean Energy Canada partnered with Navius Research to produce a unique, thorough and up-to-date report that explores clean energy, delving into investment in the sector and the resulting jobs and contribution to the Canadian economy.

Broadly put, the clean energy sector includes companies and jobs that help cut carbon pollution, whether by creating clean energy, moving it or shaping how—and how much—it’s used for heat, power and transportation. The sector is also diverse, spanning white collar and blue collar jobs across every province.

Indeed, the clean energy sector is already a big part of our economy, and it will be an even bigger part of our future. It’s time we started talking about it.

“This report highlights how much more there is to our energy sector than what we typically hear about in the news. When you consider both the clean energy sector’s size and its impressive growth, it’s clear a great story that’s been playing out in our country over the last decade has been going untold.”

“Indeed, the clean energy sector isn’t just about fighting climate change—it’s also about using Canadian innovation to create better and cheaper solutions for everyday life. So, yes, Canada, let’s talk energy, but let’s talk about the whole energy picture. Because it’s not just our future—it’s already a big part of our present.”