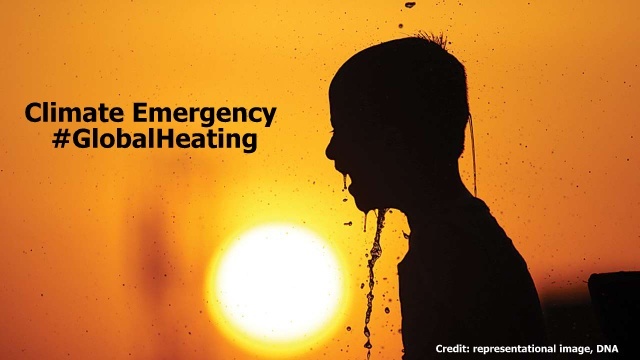 Climate change is an existential crisis. And we have but two choices: we can declare a climate emergency and take extraordinary measures to turn down the heat or we can continue to cook the planet. Many believe that choice was made decades ago when there was still time to tackle global warming. Now might be too late. We are already starting to suffer the severe impacts of a rapidly heating planet.

Evidence of Climate Emergency Is Irrefutable

Evidence of a climate gone bad is mounting. It’s no longer just isolated events scattered around the globe. It’s the crushing onslaught of new climate data, studies and analyses, record-breaking heat, extreme weather, natural disasters that show we are in a full-out climate emergency. The evidence is irrefutable.

July – the Warmest Month ever Recorded

The World Meteorological Organization (WMO) is forecasting that 2015 to 2019 will be the hottest 5-year period ever. It has confirmed that July has now replaced June as the hottest month ever recorded. “July has re-written climate history, with dozens of new temperature records at local, national and global level,” said WMO Secretary-General Petteri Taalas.

Extreme heat produces killer heatwaves and drought. Europe’s heatwave smashed previous temperature records in at least 12 countries—Belgium 39.9°C, Germany 40.5°C, The Netherlands 40°C, France 45.9°C. In Japan, 57 people are dead and over 18,000 are hospitalized because of a massive heatwave that has gripped the country. India and the  U.S. have also seen crippling heat.

2019 is on track to become the earth’s 3rd warmest year on record according to NOAA (National Oceanic Atmospheric Association).

Why Greenland is so Important

“This is the year Greenland is contributing most to sea-level rise,” according to Marco Tedesco, a climate scientist at Columbia University, reports the Washington Post. In July, no less than 197 billion tons of water melted into the Atlantic ocean. The largest single-day volume ice lost occured on August 1 according to computer model calculations—12.5 billion tons lost from surface melting.

This summer Arctic wildfires are widespread with vast areas on fire from Alaska to Siberia to Greenland. Summer fires in the Arctic are not uncommon but the current pattern of burning forests is unprecedented. What is particularly worrisome is the unusual emission of carbon into the atmosphere, 50 megatonnes in June alone, as much as Belgium did last year.

Scientist Mark Parrington of The European Centre for Medium-Range Weather Forecasts has tracked “between 250 and 300 fire “hotspots” north of the Arctic Circle most days in July — five to six times more than he typically sees,” reports grist.

Emergency Response is Too Slow

Emergencies call for an immediate response—there is “urgency” to act. If your house is on fire, you call the fire department and they put it out, immediately. With climate change it’s much more complicated. There is no climate fire department.

Many jurisdictions around the world—countries, cities, towns—have already declared a climate emergency and are gearing up for ambitious and unprecedented climate action. Unfortunately many so-called emergency declarations are merely symbolic, political posturing during an election year or designed to appease pressure groups clamoring for action on climate.

Declaring an emergency is child’s play compared to the next step—the complete mobilization of resources and the public in a full-out emergency response by all levels of government. For the most part, that is not happening or not happening fast enough.

There are many forces that resist the call for an emergency response to our climate crunch. In his latest OpEd in The Guardian, George Monbiot shows how the fossil-fuel lobby is “buying influence to get the results it wants” to nullify public concern over the climate crisis. “Just as we need to rise above self-interest and short-termism, governments around the world now represent the meanest and dirtiest of special interests. In the United Kingdom, the US, Brazil, Australia and many other nations [Canada], pollutocrats rule,” writes Monbiot.

Big Oil continues to invest heavily in exploration for more reserves—$4.9 trillion over the next 10 years. Governments continue to subsidize fossil fuels—more than $5 trillion per year according to IMF. Politicians continue to focus on short-term issues and the media continues to spend countless hours covering mundane but popular news. These actions are flagrantly incompatible with the goals of the Paris Agreement. In fact, the world burned more fossil fuels in 2018 than ever before.

Paris Will Not Save Us.

The Paris Agreement states that we must keep the warming of the planet “well below” 2°C while aiming for 1.5°C. This may not come as a surprise, but we have no hope of reaching the 1.5°C mark. That was a last minute “feel-good” add-on to the Agreement leaving participants with the feeling of having accomplished the impossible. This was their last chance and they came through.

And there’s little hope of preventing global heating from blowing by the 2°C threshold either. That would require massive changes to the Agreement which is unlikely to occur. The only legally binding requirement in the agreement is that parties must report their emissions regularly.

In The Big Stall, author Donald Gutstein shows how Big Oil got the deal it wanted in Paris. He writes “Paris was guided to its inevitable conclusion by the veiled hand of Big Oil and its corporate and political allies.” The language of the agreement is weak and lacks ambition. “Even though the production and use of fossil fuels are responsible for 70 per cent of global emissions, fossil fuels are not mentioned in the agreement,” according to Gutstein. Terms like “low-carbon transition”, “a low emissions target” and “full decarbonization” were all removed from the final document in order to get the deal done.

The controlling hand of business dating back three decades is everywhere. “The rhetoric of “sustainable development”…launched in Rio in 1992, underlies the agreement..Business is comfortable with the use of that term…[which] appears sixteen times in the Paris Agreement.”

What counts, in seeking to prevent runaway global heating, is not the good things we start to do, but the bad things we cease to do. ~ George Monbiot