Did you know that the money you’ve set aside for tomorrow and for the future of your children and grandchildren is being used to finance the climate crisis that is already destroying their very future?

Did you know that one of the major steps that will reduce your carbon footprint and point you towards a carbon neutral future is making your money green?

XR Quebec and its allies have just launched the DON’T DIRTY MY MONEY! campaign meant to expose the role of banking in financing the climate crisis.

Since the Paris Agreement, banks have poured more than $US 2.7 trillion in loans to the fossil fuel industry as indicated in the Banking on Climate Change 2020 report.

The DON’T DIRTY MY MONEY campaign aims to lift the veil on private and public investments in fossil fuels while also denouncing greenwashing strategies used by banks and governments. Extractivist thinking, central to the Canadian economy, is leading us to extinction. Solutions to this problem must attack its systemic roots, but concrete action can be taken to reduce the impact of our savings on the environment. — from website.

XR is targeting RBC (Royal Bank of Canada) in its Don’t Dirty My Money campaign. It asks “what makes RBC Canada’s most dangerous bank?”

RBC is Canada’s biggest bank and a global heavyweight in financing climate catastrophe, as the world’s fifth biggest bank for fossil fuel financing. As for tar sands, no bank on earth provided more tar sands financing than RBC in 2019 (Banking on Climate Change, 2020).

The facts and the numbers

The facts and the numbers don’t lie. Our Big Five banks are actively engaged in supporting climate change. At a time when their focus should be to become Paris-compliant, their increase in fossil fuel support is morally reprehensible. 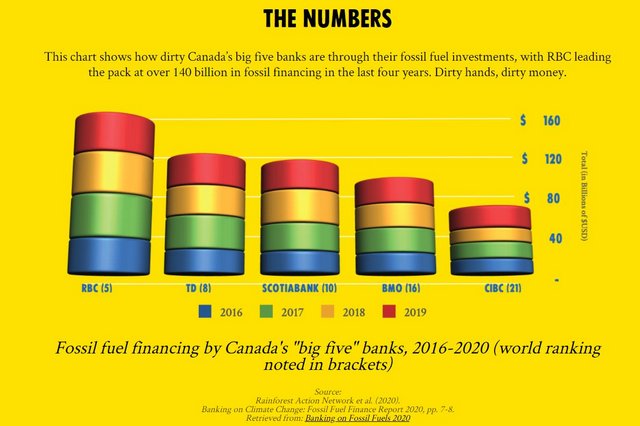 This chart shows just how dirty our “Big Five” banks are with RBC leading the pack at over $US 140 billion over the last four years. The social licence to finance the fossil economy and climate breakdown has expired but RBC continues to use our money to generate profits at the expense of a liveable future.

The XR campaign has 3 demands:

The answer to those two questions (at the start of this piece) prompted me to fire my own fossil bank which coincidentally happens to be RBC. Following a letter to the President of RBC, I followed with this post and video.