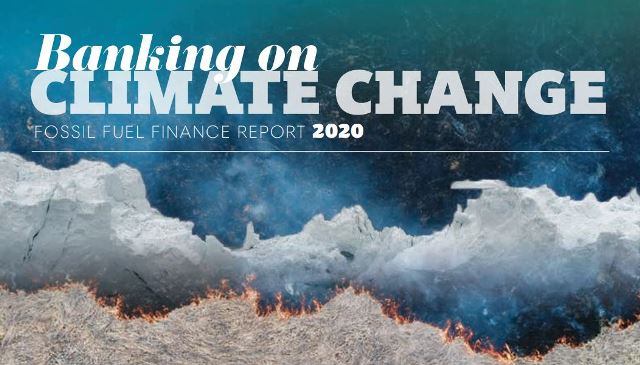 After decades of ongoing climate talks, in December of 2015, some 195 countries approved the Paris Agreement, the first ever global climate accord .

The call was for an all-hands-on-deck approach—governments at all levels, individuals, private industry, and the big financial institutions—to tackling climate change, the largest threat ever faced by humanity. In the months that followed the signing, the world felt a sense of hope, optimism and relief. We were finally going to do “something” about climate change.

But now, some four years later, the initial enthusiasm has fizzled out and the Paris Agreement is on life support. Governments and world leaders lack the political courage to support the more ambitious climate action needed to match the urgency and scope of the climate crisis. The world continues to subsidize fossil fuel expansion and emissions continue to rise—1.6% in 2017 and 2.7% in 2018. However, less well known is the role of the banking industry in financing the climate breakdown.

The Banking on Climate Change Report for the first time “adds up lending and underwriting from 33 global banks to the fossil fuel industry as a whole. The findings are stark: these Canadian, Chinese, European, Japanese, and U.S. banks have financed fossil fuels with $2.7 trillion since the Paris Agreement was adopted (2016–2019), with financing on the rise each year.”

The video which follows does an exceptionally clear job of examining investments the banks have made in fossil fuel industry infrastructure since the Paris Accord. It provides a compelling case why you should stop banking with any of the big banks and points out how to divest from your bank. Please watch and say goodbye to your “trusted bank.” It simply doesn’t deserve your trust.

Video Description: We all know the impact that fossil fuels, backed by huge government tax subsidies are having on the climate of our planet. What’s less well publicised, and arguably even disguised by the top banks, are the mind boggling levels of investment that they have also been pouring into Oil, Coal and Gas, even since the Paris Accord of 2015.

The video description includes a list of websites by country of The Global Alliance for Banking on Values members.

Between 2016 and 2019, Canada’s 5 large banks loaned over a third of a trillion dollars to fossil fuel producers. Our major banks are partnering with the fossil fuel industry and continue to be aligned with climate disaster. RBC (Royal Bank), TD (Toronto-Dominion), JPMorgan Chase, Bank of Montreal and CIBC (Imperial Bank of Commerce) are the top 5 bankers of the Tar Sands projects.

In an era of climate emergency, this is morally reprehensible and unconscionable!

The stated objective of the Paris Agreement is clear in Article 2.1.a:

The banking industry is out of sync with the Paris Agreement and “with the direction the world needs to take, and the emissions trajectory we need to get there. Banks must align with that trajectory by ending financing for expansion…while committing overall to phase out all financing for fossil fuels on a Paris Agreement-compliant timeline ~ Banking on Climate Change Report.

Related articles:
Why You Must Fire Your Fossil Bank
The Madness Continues: Fossil Fuel Subsidies Equal $1,650 Per Canadian