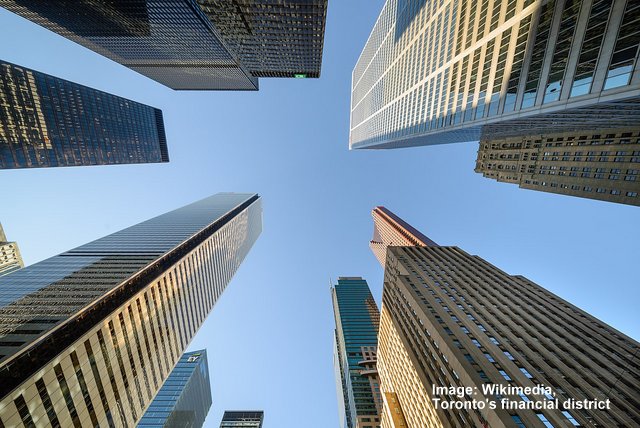 Canada’s big banks rack up huge profits each year at the expense of our climate. They are compromising the future of young Canadians by financing fossil fuel expansion. Since the 2015 Paris Agreement, the Big Five—RBC, TD, BMO, CIBC, Scotiabank—have financed the fossils to the tune of USD $482 billion globally and USD $70 billion in the Tar Sands.

The following post, first published in The Tyee, exposes the green bafflegab meant to hide the real story behind the staggering profits the big banks are pocketing yearly.

Sacrificing our Climate for Profits

There must be a basement somewhere on Bay Street full of English majors. Every day they churn out great reams of verbiage about “environmental, social and governance strategy” and fill annual reports with a dozen different ways to say that the big five Canadian banks care about the environment.

Except the numbers tell a different story, and if you want to know the truth, then the old adage “follow the money” will steer you in the right direction, passing quickly through all the green bafflegab and arriving at the conclusion that the banks are sacrificing our climate to make a profit.

The latest news is a recent pledge by TD to achieve a “target of net-zero greenhouse gas emissions associated with our operations and financing activities by 2050,” trumpeting that it’s the first Canadian bank to do so. Sounds good, yes?

But dig deeper and there’s no mention that since the Paris Agreement TD has financed more than C$135 billion in fossil fuel projects, the eighth largest amount out of all the banks on the planet. What will TD’s net-zero pledge do to alter this climate-killing practice? It doesn’t say. But judging from the collective shrug from the oil patch, probably not much.

What TD does say is that it will “work closely with clients” rather than decide that certain clients probably shouldn’t be clients. Notably, Suncor, Cenovus and Canadian Natural Resources Ltd. all also have 2050 net-zero pledges—so presumably TD will continue to finance them—whose products rapidly fill our atmosphere with “green” carbon while our life-support systems fail.

Not to single out TD here. RBC is the big daddy of Canadian fossil fuel financing, number five in the world, financing over C$183 billion in fossil fuel projects since the Paris Agreement. While it hasn’t yet made a net-zero pledge, last month it did make the symbolic declaration that it would not finance projects in the Arctic National Wildlife Refuge, which is helpful politically to the Gwich’in people leading the fight to protect their homeland. TD, BMO and CIBC also made that pledge.

RBC added a commitment about coal. Given the climate crisis and the fact that coal is the worst fossil fuel, you might expect a blanket commitment to get out of coal right away, but instead RBC parsed its words, saying it wouldn’t finance new coal clients if more than 60 per cent of their revenues are from coal — even though many of these companies are conglomerates so their coal operations are a minority of their business — and that it would work with existing coal clients to reduce emissions, with no targets or timelines.

Taken together, RBC’s Arctic and coal pledges will probably not significantly affect its financing practices.

As for BMO, Scotiabank and CIBC, they provide hundreds of billions in fossil fuel financing, and have no plans to end this. In addition, the CEOs of the big five banks can be reliably found spouting off oil industry propaganda in Canada’s media, decrying regulations and arguing for more pipelines.

In short, the big five banks are long on fancy rhetoric about being good climate actors, but where the rubber hits the road, they are just as responsible for the world’s failing climate performance as the oil companies they enable.

How do we change this? TD has admitted that it doesn’t yet know how to implement its net-zero pledge and will set interim targets on the way to 2050. If its pledge is to have any credibility, it needs to set a simple target of year-over-year reductions in fossil fuel financing from today forwards. And, since it is starting from such a massive baseline of tens of billions of this financing each year, it needs to quickly slash that in half, then half again if it is serious about being consistent with climate science.

The same applies to the other banks, although they are even further away from taking action. The oil and gas divisions in these banks are powerful and won’t voluntarily shrink away — even though they’ve been losing their banks money lately with the price of oil crashing.

None of the big five banks will move beyond green bafflegab until citizens and society — including their customers — demand it. Young people are in a particularly powerful position in this regard, since they are future mortgage holders, the most prized bank asset.

If you are with one of the big five, write to your branch manager and tell them you’ll move your business to a credit union unless they stop financing billions of fossil fuel projects. Better yet, start moving your money over to a credit union anyway — as a bonus you’ll feel good about owning the institution you bank at.

ICYMI:
Why You Must Fire Your Fossil Bank
Our Big Banks Are Financing The Climate Breakdown
To Prevent Extinction, Banks Have To Stop Funding It