Below 2C
Home Energy Pipelines The End Is Near for Trans Mountain and Keystone XL – Pipelines...
Share to raise climate awareness

Canada’s  Energy Future 2020 report—EF2020—could not be clearer. “Achieving net-zero (greenhouse gas) emissions by 2050 will require an accelerated pace of transition away from fossil fuels,” notes the report. Building more pipelines does the exact opposite. And yet, Prime Minister Trudeau is forging ahead with the Trans Mountain project and is now aggressively lobbying President-elect Joe Biden to not reverse Trump’s re-approval of the Keystone XL pipeline originally nixed by President Obama in 2015.

End of the Road for Trans Mountain and Keystone XL

EF2020 is the first Energy Futures Report to extend the energy projection period to 2050. EF2020 also introduces a new scenario, the Evolving Energy System Scenario (Evolving Scenario), to complement the traditional baseline projection. EF2020 explores what going beyond an evolving energy system could mean for Canada.

The main scenario (the status quo scenario) in the CER’s (Canada Energy Regulator) annual Energy Futures report concludes that the Trans Mountain, Keystone, and Enbridge’s Line 3 pipeline will be the last three the country will ever need. But that is highly questionable. “Neither of the CER’s scenarios factors in the considerably more ambitious emission cuts that will be needed to deliver Canada’s share of a global commitment to limit average global warming to 1.5°C under the 2015 Paris Agreement,” writes The Energy Mix. “There will be no need and no justification to complete the Trans Mountain pipeline expansion or the Keystone XL pipeline if Canada makes any effort at all to strengthen its climate policies.”

The EF2020 Report and the CER analysis have triggered a slew of predictable reactions from environmental groups calling on the government to listen to its own analysis and cancel the Trans Mountain pipeline before billions more are wasted to complete the expansion project.

A news release from 350.org, the Tsleil-Waututh Nation Sacred Trust Initiative, Dogwood, Stand.earth, the Wilderness Committee, and West Coast Environmental Law, pointed out that even “minimum climate action” would be enough to justify cancelling the two pipelines —TMX and KXL.

“The [CER] analysis undermines Prime Minister Trudeau’s position that the expansion of oil production and TMX and KXL are consistent with Canada’s climate policy,”

Thomas Gunton, director of Simon Fraser’s Resource and Environmental Planning Program, added that the climate accountability bill on its own is enough to move the country past the status quo scenario in the Energy Futures report. Given that reality, “you’re not going to need these pipelines, so you should at least defer or shelve construction,” rather than incurring a combined C$22-billion price tag for the two projects.

The Pembina Institute agreed that the projections aren’t aligned with the climate accountability legislation—or, for that matter, with Canada’s promises under the Paris deal. “The energy sector is changing globally, with ramifications for the future of Canada’s oil and gas sector,” said Senior Analyst Benjamin Israël.  “Leadership and vision are needed to help Canada’s oil industry successfully adapt to this new reality.”

“But while Canada has set multiple emissions reduction targets over the years, it has never met them,” said Seth Klein in a recent CBC radio broadcast of The Current. By adding to fossil fuel infrastructure, additional pipelines like TMX and KLX impede efforts to reach emissions targets and fight the climate crisis.

“The new climate denialism is when our leaders say that they get the climate crisis, but then they don’t practice politics that aligns with what the science says we have to do,” said Seth Klein, the former B.C. director of the Canadian Centre for Policy Alternatives, and author of A Good War: Mobilizing Canada for the Climate Emergency.

There is simply no twisted form of logic that can justify the expansion of pipeline capacity—Trans Mountain and Keystone XL—as part of the transition to Net-Zero by 2050.

ICYMI:
What We’re Up Against: The New Climate Denialism
Ottawa Net-Zero Legislation Fails To Meet the Scale Of the Climate Threat. Again. 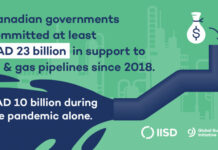 Canada Spent More Than $23 Billion on Pipelines Since 2018