Below 2C
Home Socio-Politico Banks BankSwitch: Your Savings Could Save Earth 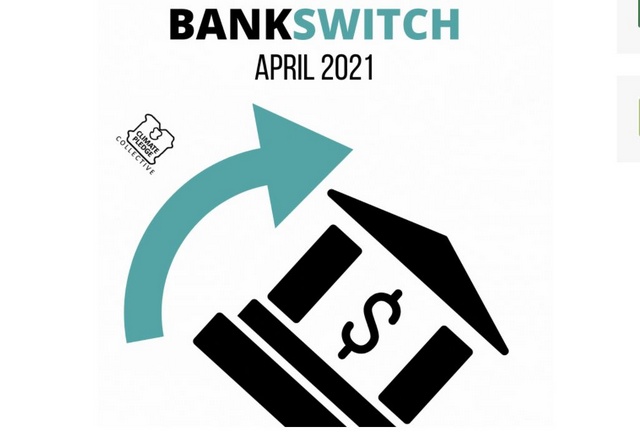 The pressure on the financial sector—banks, pension funds, insurance companies—to join the global movement to tackle the climate crisis is mounting. And the number of campaigns, both large and small, to force the financial world to do its share of the heavy lifting is also growing. This post—BankSwitch: Your Savings Could Save Earth—is about one such campaign spearheaded by a young couple from Toronto who founded Climate Pledge Collective.

BankSwitch: Your Savings Could Save Earth

BankSwitch is a campaign to pressure Canadian Banks to clean up their act and stop funding the expansion of the fossil fuel industry.  We’re asking people to start with a letter or email and give the banks a deadline of April 22 (Earth Day) 2021 — hopefully this will trigger the human instinct of ‘loss aversion’ and get things moving within their organization.

The long lead time means you can make the switch just after their Annual General Meetings next year.  If the policies your bank announces over the next year are good enough, you also won’t have to deal with the hassle of actually filling out all the forms to move your money.  If they fail to act, send them a reminder and then make a plan to move your money sometime in the Spring.

We suggest using the demands developed by Banktrack:

While university and pension fund divestment campaigns put some pressure on the fossil fuel sector, exploration and expansion will continue as long as oil companies can get banks to underwrite their new projects.  The big five Canadian banks are pouring money into oil and gas exploration, including particularly damaging projects like fracking and tar sands development.

Since the Paris Agreement was signed, RBC has pumped $160 billion into fossil fuel companies; TD has provided $103 billion; Scotiabank $97.5 billion; Bank of Montreal $82 billion; CIBC $57 billion.  In a comprehensive review of policies on fossil fuel investment and loans TD scored 3 out of 200 possible points; RBC earned 1 point and BMO, CIBC and Scotiabank earned HALF a point.  To read the full report from Banktrack and the Rainforest Action Network click here.

Among Canadian Banks only National Bank and Desjardins have even signed the UN Declaration on Responsible Investing which mostly just requires them to track and report how much money they are pouring into fossil fuel expansion.

The figure above shows that simply burning the global reserves of oil coal and gas which HAVE ALREADY BEEN DEVELOPED will exceed the carbon budget for staying under 1.5C and nearly exceed the budget for 2C. Yet fossil fuel companies are continuously seeking out NEW reserves.  While our society still needs oil and gas to heat homes and fuel our vehicles, we must stop exploration and development of new projects immediately — and the only way to do that is to cut off their financing.

Where should I move my money to? Click here.

For the full details on the BankSwitch campaign, Click here.

ICYMI:
Why You Must Fire Your Fossil Bank
Our Big Banks Are Financing The Climate Breakdown
To Prevent Extinction, Banks Have To Stop Funding It