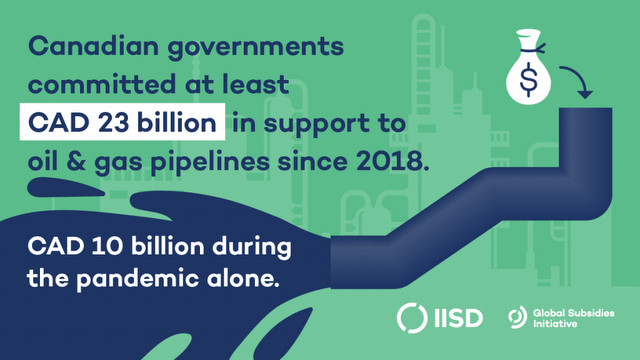 A recent report by the International Institute for Sustainable Development. shows that Canada has spent $23 billion on pipelines during the past three years. The report came out about the time of the heat dome and the devastating heat wave that gripped both the western U.S. and Canada with extreme record-breaking temperatures presumably linked to climate change caused by the burning of fossil fuels.

During an interview with Michelle Gamage of The Tyee, author of the report Vanessa Corkal says that Canadians ought to consider “whether or not these investments are putting us on the path to deal with climate change at the scale and the pace that we need. And the pace we need has really been made clear this past week.”

(The following post was previously published in the Environmental Defence blog by Julia Levin.)

In a climate emergency, how do you think the federal government should be using public dollars?

Solar energy and battery storage come to mind. So does electrified public transportation and energy efficiency for our homes.

When government money is tied up in a polluting industry there’s less money to invest in clean energy. — Vanessa Corkal, Institute for Sustainable Development

This is the key finding from a new report, Pipelines or Progress: Government support for oil and gas pipelines in Canada, that was just published by our friends at the International Institute for Sustainable Development. The report looks at federal and provincial support for three major pipelines: the TransMountain pipeline and expansion project (TMX), Coastal GasLink and the now dead Keystone XL.

These are projects which violate Indigenous rights and put ecosystems at risk. The pipelines would lead to the expansion of oil and fracked gas and the emissions from these projects would make it impossible for Canada to do its fair share to tackle the climate emergency.

Some quick background on the three pipelines:

In addition to the shocking topline number, some key findings include:

$23 billion is likely an underestimation, because calculating full levels of subsidies and other government support is impossible due to a lack of government transparency. Thousands of pages of federal government documents related to financial support for the Trans Mountain project were withheld from researchers.

Going in the opposite direction

Spending money on pipelines extends and expands the production of fossil fuels – at a time when the world’s scientists and the International Energy Agency are clear that we need to be moving in exactly the opposite direction.

We know we need a massive transformation of our current economy away from fossil fuels to renewable energy. We have available, affordable and sustainable solutions that will do most of the heavy lifting to achieve deep reductions in the next decade.

Yet, instead of focusing on these solutions, governments in Canada are continuing to prop up outdated and dirty energy systems. Government doesn’t have infinite resources. This IS a zero sum game.

A just transition is possible. One that prioritizes people over corporations, where people have secure careers in a clean economy that is designed by and for workers, and where the energy we use is renewable. But not if our decision-makers keep subsidizing pipelines.

Keystone XL is dead. Neither TransMountain nor Coastal GasLink has been completed – we can still stop these projects before it’s too late.

Just in from the Guardian: a few facts:

ICYMI:
Time’s Up For Fossil Fuels
Heads-Up to Canadians: Your Government is Financing Pollution