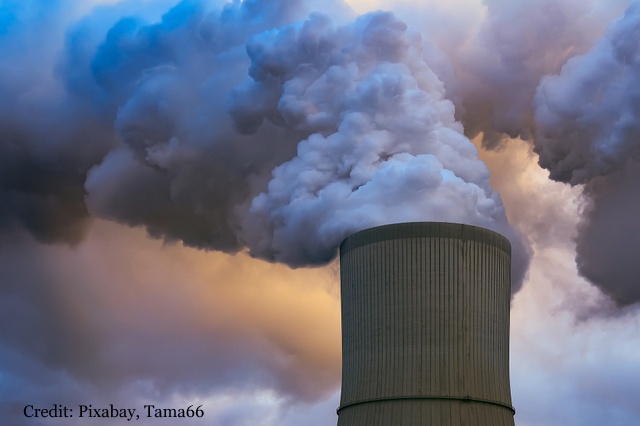 “On current trends, the probability of staying below 2°C of warming is only 5%, but if all countries meet their nationally determined contributions and continue to reduce emissions at the same rate after 2030, it rises to 26%,” tweeted Greta Thunberg recently. This article was previously published in Common Dreams

Only 5% Chance of Staying Below2°C

A new study warns that countries’ pledges to reduce planet-heating emissions as part of the global effort to meet the goals of the Paris climate agreement must be dramatically scaled up to align with even the deal’s less ambitious target of keeping temperature rise below 2°C—though preferably 1.5°C—by the end of the century.

A pair of researchers at the University of Washington found that the country-based rate of greenhouse gas (GHG) emissions cuts should increase by 80% beyond current nationally determined contributions (NDCs)—the term for each nation’s pledge under the Paris agreement—to meet the 2°C target.

The study, published [recently] in the journal Communications Earth & Environment, adds to the mountain of evidence that since the Paris agreement—which also has a bolder 1.5°C target—was adopted in late 2015, countries around the world have not done enough to limit human-caused global heating.

Need a Drop in Emissions of 1.8% Per Year

“To have an even chance of staying below 2°C,” the study continues, “the average rate of decline in emissions would need to increase from the 1% per year needed to meet the nationally determined contributions, to 1.8% per year.”

Greta Thunberg of the youth-led climate movement Fridays for Future called the findings further evidence “that our so-called ‘climate targets’ are insufficient.”

“On current trends, the probability of staying below 2°C of warming is only 5%, but if all countries meet their nationally determined contributions and continue to reduce emissions at the same rate after 2030, it rises to 26%”

“A number of people have been saying, particularly in the past few years, that the emissions targets need to be more ambitious,” said lead author Adrian Raftery, a UW professor of statistics, in a statement. “We went beyond that to ask in a more precise way: How much more ambitious do they need to be?”

Raftery and Peiran Liu, who did the research as part of his doctorate, used statistical tools to forecast carbon emissions for all countries and regions based on three key drivers of human-produced GHGs: national population, gross domestic product per person, and carbon intensity—or CO2 emissions per dollar of GDP.

They found that “achieving the Paris agreement’s temperature goals is something we’re not on target to do now, but it wouldn’t take that much extra to do it,” explained Liu. “Globally, the temperature goal requires an 80% boost in the annual rate of emissions decline compared to the Paris agreement, but if a country has finished most of its promised mitigation measures, then the extra decline required now will be smaller.”

Liu and Raftery also found that the percentage increase in emissions-reductions targets necessary to achieve the higher Paris goal significantly varies from country to country. The United States would need to boost its goal by 38%, whereas China would need only a 7% increase, according to the study. 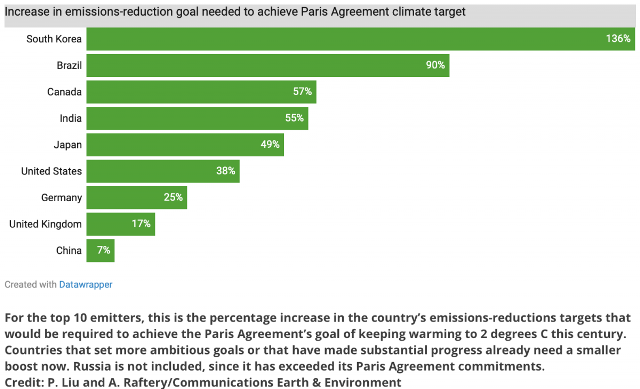 Raftery responded optimistically to the results of the research, which was funded by the National Institutes of Health.

“To some extent, the discourse around climate has been: ‘We have to completely change our lifestyles and everything,'” Raftery said. “The idea from our work is that actually, what’s required is not easy, but it’s quantifiable. Reducing global emissions by 1.8% per year is a goal that’s not astronomical.”

“If you say, ‘Everything’s a disaster and we need to radically overhaul society,’ there’s a feeling of hopelessness,” he added. “But if we say, ‘We need to reduce emissions by 1.8% a year,’ that’s a different mindset.”

While Raftery framed the changes needed to achieve the less bold Paris goal as possible, Niklas Höhne, a German climatologist and founding partner of NewClimate Institute who was not involved with the UW research, reiterated the urgency in an interview about the study with the Washington Post.

Time is Running Out

“Time is running out,” warned Höhne, who is involved with Climate Action Tracker, which follows countries’ emissions pledges and actions. “The longer we wait, the more difficult it will be to turn emissions downward.”

According to Höhne, based on current pledges, the world is currently on track to hit 2.6°C by 2100; based on actions, the figure is more like 2.9°C.

How much more do nations need to do in order to meet the key #ClimateAction commitments they made in Paris in 2015? They need to nearly double them, new research finds, a tall order for @POTUS and other world leaders meeting in April. By @brady_dennis https://t.co/8KmwjvBz9O

The new study follows a recent United Nations Environment Program (UNEP) report which found that the world is headed for a temperature rise beyond 3°C this century—but also found that a green recovery from the coronavirus pandemic could cut projected GHG emissions for the next decade by about 25%.

The UNEP report came out just before the Climate Ambition Summit in December to mark the fifth anniversary of the Paris agreement. At that event, U.N. Secretary-General António called on “all leaders worldwide to declare a State of Climate Emergency in their countries until carbon neutrality is reached.”

Due to the pandemic, the summit was held virtually. The ongoing public health crisis also delayed COP26 for a year. Ahead of that event, now scheduled for November 2021, countries party to the Paris agreement are expected to unveil their updated NDCs.

U.S. President Joe Biden has promised to convene a climate summit ahead of COP26. Biden took action on his first day in office to rejoin the Paris agreement, which his predecessor officially ditched the day after the November 2020 election. While welcoming that move, climate campaigners have urged Biden to go further.

“The Paris climate accords were insufficient six years ago, and they are even more so now,” said Food & Water Watch executive director Wenonah Hauter in January. “The Biden White House needs to chart a much more aggressive course for dealing with our climate emergency. We need a rapid transition to 100% renewable energy and a ban on fracking and all fossil fuel infrastructure projects. The Paris agreement represents market-friendly incrementalism, and we need a much more ambitious plan to get the country—and the world—off fossil fuels.”