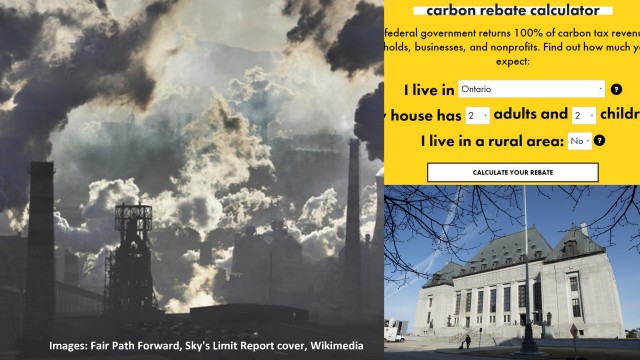 Last week, in a 6-3 decision, the Supreme Court of Canada ruled that the federal government has the right to impose minimum carbon-pricing standards on the provinces—more specifically Saskatchewan, Ontario, and Alberta—that challenged the constitutionality of the Greenhouse Gas Pollution Pricing Act.

(The following is an opinion piece by Dianne Saxe first published in the Toronto Star.)

Time to Move On After Carbon Pricing Survives the Courts

In our growing climate crisis, [March 25 was] a pretty good day. The Supreme Court of Canada rejected Conservative premiers’ attacks on Canada’s federal carbon pricing law, despite our complicated constitution. This should be the end of the anti-carbon price dead end. We have a real job to do.

The climate crisis is an overwhelming threat to human civilization. Its dangers have been clear for decades. And we know what to do to keep a stable climate, and it includes slashing our emissions of greenhouse gas pollution by half this decade.

No question, this will take work. For a century, we have built our infrastructure and our economy around burning fossil fuels. We have a small population, but we are one of the world’s worst carbon polluters both at home and abroad. Canada has profited heavily from digging up fossil fuels, especially petroleum from the oilsands. What Canada does about the climate crisis matters. Having wasted decades without effective climate action, we now have little time and a great deal to do.

Fortunately, we have some excellent tools. The single most powerful is carbon pricing. It cannot solve the climate crisis on its own, but it levels the playing field between fossil fuels and a cleaner future, it rewards innovation and it reduces cost. When pollution is “free” we get more of it; when polluters pay for their damage, it’s remarkable how quickly they find alternatives. Without a carbon price, we will probably speed ever faster towards climate breakdown.

In the teeth of this emergency, the Conservative attack on the carbon price was a terrible waste of time, money and energy. Carbon pricing was a right wing invention, a market-based alternative to government regulation. Nevertheless, the Conservative Party, which just voted again to deny that climate change is real, has made opposing carbon prices a badge of loyalty, without offering anything in return.

The Conservative premiers who spent millions attacking the federal law dismantled climate action in their own provinces. Doug Ford’s “Environment Plan” emphasizes litter pick up, while driving up emissions and air pollution with gas-fired electricity, highways and sprawl. When Erin O’Toole releases his carbon-price-free plan, I expect him to promise tree planting, nuclear power, and using CO2 to extract oil, expensive measures that will achieve little any time soon.

The Conservatives do not offer a better alternative to carbon pricing, just delay, denial and greenwashing. No expensive future technology will somehow make everything fine. Planting trees and picking up litter are worthwhile, but continuing to burn fossil fuels as if pollution were “free” is a dead end.

With Conservative provinces refusing to act, the federal Liberals stepped in with the Greenhouse Gas Pollution Pricing Act. The Conservatives turned this into a multi-year, multimillion dollar turf war, which the Supreme Court has now mercifully brought to an end. The decision is a tough read, primarily concerned with how to squeeze carbon pricing into our constitutional straitjacket after 150 years of federal-provincial disputes. Ultimately, six judges upheld the act, because do-nothing provinces threaten Canada as a whole.

Canadians know we are in a climate crisis and want to see strong action, though most wrongly believe that Canada is already an environmental leader. To be honest, the carbon price has been too low (and its future too uncertain) to have driven down our emissions yet. It should have more impact now, with the price scheduled to increase, but many other initiatives are necessary if we are to get off fossil fuels in time.

For more on carbon pricing: The Most Silver Bullet-ish Policy We Know Of

We need strong laws and strong regulations. We need a strong climate lens on every decision that governments make. We need transparent climate reporting. We need to disrupt fossil fuel lock-in. We need to protect nature. We need to make it easier, safer and more convenient to choose clean options. And we need to use the climate crisis, wherever possible, as a trigger to make health and inequality better.

Today, thank you to everyone who made this victory happen. Tomorrow, we must all go back to work. This case was an unfortunate sideshow. The real battles are ahead.