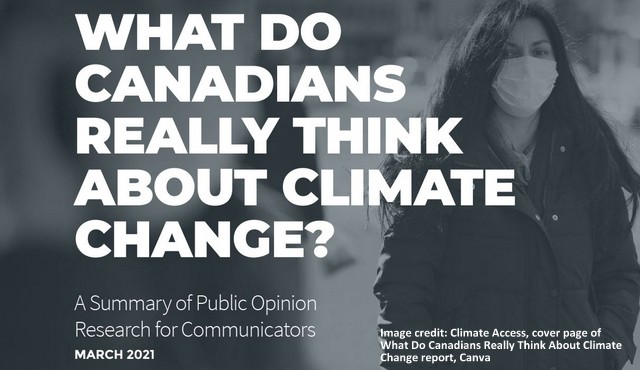 What Do Canadians Really Think About Climate Change? is a report “designed to help communicators understand public opinion on climate change in Canada.” Canadian attitudes on climate will to a large extent determine how far governments are willing to stretch their policy agenda during the next decade leading up to our 2030 Paris goals.

This post is sourced from the report itself and also from a slide deck and webinar presentation by Climate Access and Climate Narratives Initiative recently hosted by Citizens’ Climate Lobby Canada.

Canadians are worried about climate

Canadians overwhelmingly understand that climate change is a serious and growing threat.

The good news is that over 75% of Canadians are worried or extremely worried about climate change; 71% say that an energy transition is inevitable and already underway; 66% want Canada’s climate policy to be ambitious and world leading. So based on these numbers, climate communicators might be tempted to believe that the climate movement in Canada has won the day. But it’s not quite what it seems. “The big challenge is that there is significant segmentation underneath the top-line numbers,” says the report.

While around 25% of Canadians are alarmed and engaged, there remains 45% who are not really informed or yet engaged.

“The big challenge in Canada is to build a firm social mandate for action by galvanizing the engagement of this large ‘moveable middle’ of concerned citizens in addition to mobilizing the alarmed,” says the report.

“While regular citizens have a sense of worsening extreme weather and generalized concern about climate change, very few can name any climate policies without prompting. Researchers find that environmental citizenship remains focused on issues like recycling, waste and drinking water. For example, “almost no one in focus groups notes the contribution of cars to greenhouse gas emissions.” (Excerpt from report)

The report shows that 71% of Canadians think our government’s actions on climate are good or acceptable. A full 89% say that Canada’s actions are better than the global average. But still, a small majority—ranging from 42%-57%—says the feds are not doing enough on both climate and the transition to a clean economy. Only 20-25% are hard-core opposed to climate action—mostly older white men and Conservative Party voters.

“Two-thirds of Canadians want the country to perform better than average in the shift to low carbon energy and clean technologies. But note that nine out of ten think we’re average or better “as things stand today” (evenly split between average (44%) or more ambitious (45%). Just 11% of Canadians think we’re “taking things more slowly.” (Excerpt from report)

Many Canadians are somewhat delusional when asked about how we’re doing compared to the rest of the world, thinking that we’re nearly comparable to Germany but ahead of the UK, the US and China. The following graphic will feel like a cold shower for that slice of the Canadian public. 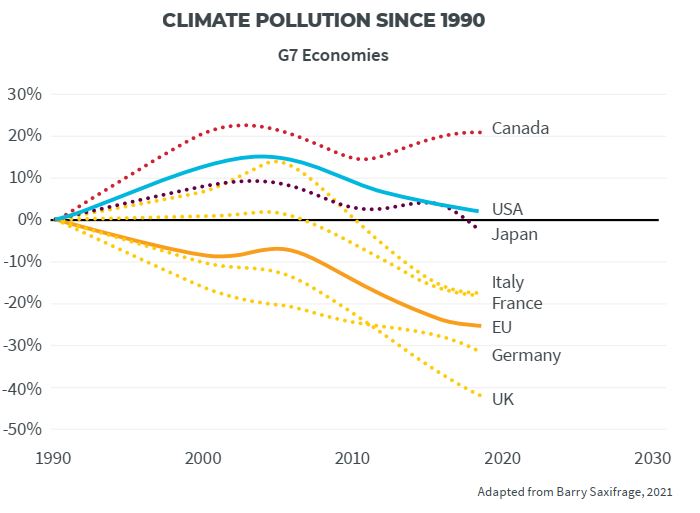 Although 39% believe we’re among the most ambitious countries on climate, this is not borne out by the facts. While Canada’s emissions have not been falling, other countries have been on the decline.

In A Good War, author Seth Klein writes that “the Canadian public is increasingly worried about climate change, but often people don’t understand what actually causes climate change. Hence the contradictory polling results in support of pipelines and expanded oil and gas development, even as people rank tackling climate change as a top priority….Nor do most people have clarity about what the necessary solutions are, or that these solutions exist.”

The What Do Canadians Really Think About Climate Change? report bears this out loud and clear. Canadians are saying the right things when polled on climate but a much lower proportion is willing to support systemic action or take individual action that may be inconvenient to their cozy lifestyle.

The bottom line is that the concern for climate action among Canadians is much higher than their willingness to take more action in spite of an accelerating climate crisis.

The challenge for climate communicators is to engage the “moveable middle” in order to address the “serious gap between the level of concern and the demand for more action” identified by the report. Communicators will find helpful guidelines about key audiences, norms, mental models, and ways of naming the problems and naming the solutions in the report.

The What Do Canadians Really Think About Climate Change? report is an essential tool to help the climate movement move people from the concerned to the alarmed.