Below 2C
Home Socio-Politico Banks Who Knew? Canada’s Big Banks Have Board Members With Ties To Fossils 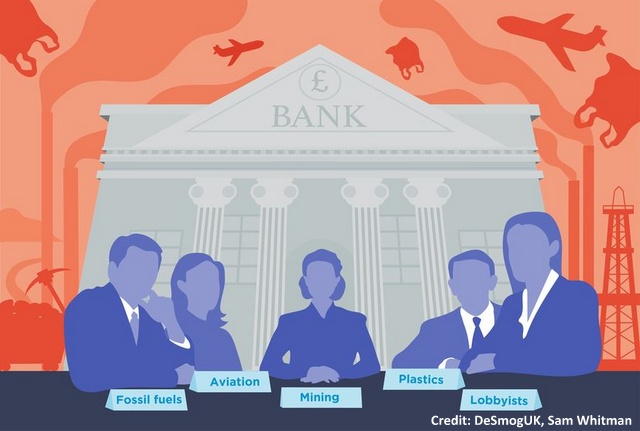 “Polluting industries are overwhelmingly represented on the boards of the UK’s banks by directors with past and current connections to high-carbon and environmentally damaging companies,” reports a new DeSmog analysis “prompting concerns that the boards’ personnel pose a systemic obstacle to climate action.” Board members with connections to fossils—the fossil fuel in industry—should raise alarm bells within bank boardrooms being questioned about their financing of carbon emissions.

A recent investigative report from DESMOGUK revealed the shocking truth that “80 percent of board members at the UK’s five biggest banks have affiliations with environmentally damaging companies, either as current or previous advisors or employees.”

When the report came out, the journalists who did the research were interviewed on the BBC. And when people began to wonder why Lee Raymond, the former Exxon CEO who oversaw Exxon’s vast climate disinformation campaign, had a seat on the JP Morgan Chase board of directors he was forced to resign from the position under intense public scrutiny.

After reading the UK report, I decided to take a look at the boards of the big five Canadian banks and, of course, every single bank had board members with close ties to one or more fossil fuel companies — plus representatives from other dirty industries like mining and aviation. I likely missed several people as I just skimmed public bios rather than actually going digging. 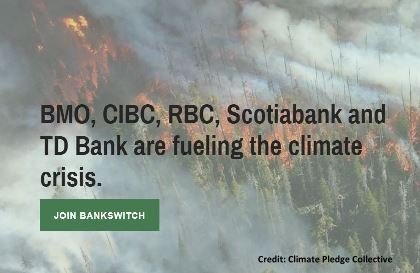 At BMO, Lorraine Mitchelmore is a former Shell executive. At CIBC, Jane Peverett was the CEO of Union Gas and Patrick Daniel was the CEO of Enbridge. Enbridge is pushing the Line 3 pipeline expansion through Ojibwe territories in Minnesota in the face of strong opposition. At RBC, Thierry Vandal is currently on the board of directors for TC Energy who are currently building the Coastal Gaslink Pipeline through Wet’suwet’en land out west. At Scotiabank, Una Power is a former Nexen CFO and currently on the board of directors of TC Energy; while L. Scott Thomson is a former CFO of Talisman Energy Inc. At TD, Brian C. Ferguson is the former CEO of Cenovus Energy.

Even as I was making these unsettling discoveries, I realized this wouldn’t be a “scoop” or even a surprise to anyone in Canada. Oil extraction is so deeply entrenched in our economy and society that the banks could easily argue that it would be irresponsible NOT to have representatives of the oil industry on their boards.

And that is exactly why it is so hard to develop meaningful climate policy in Canada. A carbon tax? Fuel standards? Ending fossil fuel subsidies? How can we expect to make progress where we need to, if there is someone asking ‘well what about the oil industry’ at every turn?

As a country, we have fallen deep into the ‘resource trap.’ Our solution to economic troubles in this boom and bust industry is always to bail out the fossil fuel companies with tax breaks or new loans. Popping the carbon bubble in Canada will be painful in the short term, but the more money we pump into the sector trying to keep it alive, the more painful the eventual collapse will be.

We can’t have both

Everyone knows we have to choose between the oil industry and a habitable planet. We can’t have both.

But no one wants to put the choice in those terms because we have representatives from the oil industry in our banks, in our universities, in media and in our government. And, worse still, we tell ourselves that they ought to be there ‘because mining and energy are such big parts of the Canadian economy.’

JP Morgan Chase is not exactly a moral paragon, yet they still felt obliged to remove Lee Raymond from their board of directors. But here in Canada, where we don’t like to talk about anything contentious, we have convinced ourselves that being dependent on an industry that is putting all life on earth at risk is totally normal. Just part of the landscape. Nothing to see here.