“Between January 2015 and September 2019, banks provided loans and underwriting of more than USD 1.7 trillion to key actors in the global plastics supply chain,” notes Portfolio Earth in its recent Bankrolling Plastics report. “Banks must no longer be able to evade responsibility for the role they play in enabling plastic pollution worldwide.”

(The following piece was previously published in The Energy Mix.)

A groundbreaking investigation into plastics funding has found that the world’s biggest financial institutions have been “silently and indiscriminately” bankrolling the biggest actors in the global plastic supply chain. Between January 2015 and September 2019, they wrote cheques totalling more than US$1.7 trillion.

In its Bankrolling Plastics report, the collaborative research group Portfolio Earth reveals how institutions like Bank of America and HSBC have been acting as enablers for the plastic supply chain—making them partially, but profoundly, responsible for the plastic pollution crisis, reports Forbes.

“Each minute, a truck full of plastics ends up in our oceans, and around one million marine birds and 100,000 marine animals die each year from ingesting plastics,” Forbes writes. “Plastic packaging pollution is now found from the deepest oceans to the top of Mount Everest, and the average person eats about 70,000 particles of microplastic a year.”

Plastic and other single waste pollution are suffocating our oceans and present on-going dangers for marine life.

Portfolio Earth traces a full 80% of funding to plastics actors to 20 banks, including Canada’s Toronto Dominion and Royal Bank. Among those 20, the 10 biggest funders—Bank of America, Citigroup, JPMorgan Chase, Barclays, Goldman Sachs, HSBC, Deutsche Bank, Wells Fargo, BNP Paribas, and Morgan Stanley—make up 62% of the finance. 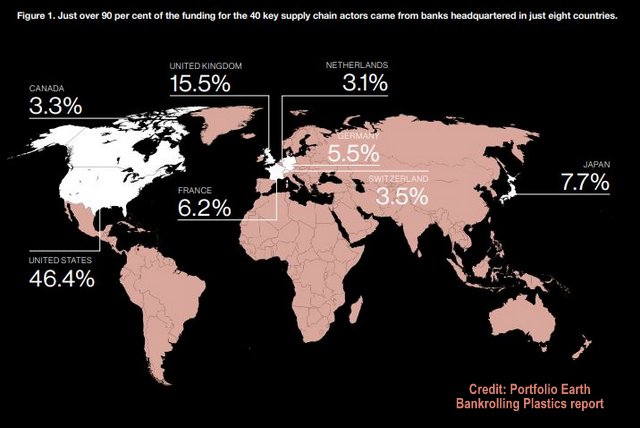 The report says the banks showed a complete lack of discrimination in handing out that funding, despite escalating public cries for change.

“They are not introducing any due diligence systems, contingent loan criteria, or financing exclusions when it comes to the plastics industry,” Portfolio Earth states. What these lenders need to do is to “make funding of corporate actors within the plastic packaging supply chain contingent on companies implementing best practice,” the organization adds, include prioritizing reuse and supporting localized supply chains.

“Governments should stop protecting banks and rewrite the rules of finance to hold banks liable for the damage caused by their lending,” the report authors add.

And cleaning up their lending practices would not be only an act of social and environmental good. Gabriel Thoumi, director of the plastics program at Planet Tracker, said continuing to blithely fund the plastic supply chain is a proposition with a rapidly eroding business case. “For the throwaway plastics industry, from production to use to end-of-life, smart investors accurately model environmental risks into their investment strategies,” he told Forbes

ICYMI:
To Prevent Extinction, Banks Have To Stop Funding It
Fossil Banks No Thanks
Canada’s Big Banks Are Sacrificing Our Climate For Profits