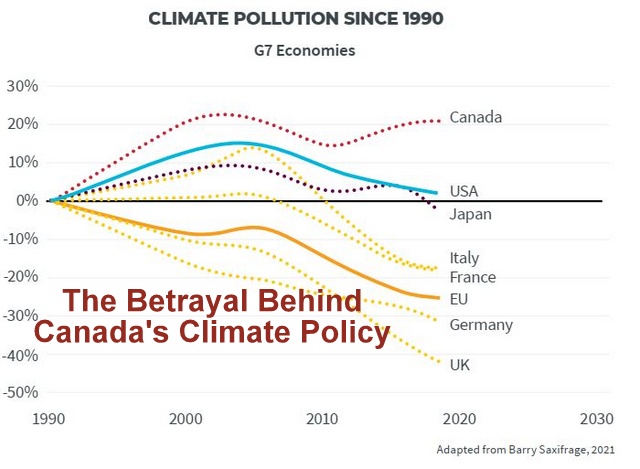 Deep down we know that something is very wrong. We can see that we’re not actually making progress, To the contrary, we’re falling further behind. Canada is failing to meet one climate target after another. The betrayal behind Canada’s climate policy should be obvious to Canadians but it is not.

“Two-thirds of Canadians want the country to perform better than average in the shift to low carbon energy and clean technologies. But note that nine out of ten think we’re average or better “as things stand today” (evenly split between average (44%) or more ambitious (45%). Just 11% of Canadians think we’re “taking things more slowly.” — What Do Canadians Really Think About Climate Change Report

(This post by Brad Zarnett was previously published in Climate Change is Coming for Us.)

It just doesn’t feel right. Everyday seems to bring some exciting news about a new innovative solution that will hopefully prevent us from experiencing devastating climate change. Sector after sector agrees to “do better” and sets targets. Even Wall St., arguably the most predatory and pillaging of all the sectors, appears to be on board with its acceptance of the underwhelming ESG (Environmental Social Governance). We cheer these seemingly positive actions but it still doesn’t feel right. Deep down we know that something is very wrong. We can see that we’re not actually making progress. In fact, we’re falling further behind.

There’s a big difference between positive change and meaningful change.

In our anxious state, we hastily assume that those chosen to solve our climate crisis share our values and goals. That’s a mistake. They don’t. But we’re so busy with life that we let it slide, and we’re left with leaders and decision makers who have different priorities and concerns than us. They tell us with unwavering confidence not to worry — they’re on it. They tell us that they will use the same market strategies that got us into this mess, to get us out. And for the most part — we believe it — at least our conscious mind believes it and who knows, maybe our subconscious too. But there’s still a nagging doubt that something is very very wrong.

There seems to be a consensus that we need to solve this problem, but have we actually agreed on the nature of the problem? Are we taking our eye off the ball and placing too much of a focus on the economy, trying to keep things humming along? Is this economy even worth saving? It seems to have caused a lot of poverty, environmental destruction and suffering. Who really benefits by keeping it “humming along”? Who’s profited the most from the tax lowering tweaks of the past decades? Does our approach make sense? It may come as a surprise to some but the number of billionaires in a society doesn’t actually correlate with societal wellbeing.

Most people are worse off than they we’re a decade ago. Who are we “saving” this economy for? The winners? The “money hoarders”? The ruling elite? Are we inadvertently trying to protect the richest 0.0000001%, rather than trying to ensure that billions of people are spared from intolerable suffering in a few short decades from a problem that is being tragically mishandled? And for who’s benefit?

Our climate challenge is being led by politicians with a thirst for power who have likely been corrupted by the donor class. They hold different values and goals than us but they’ve promised that they have a plan to get us out of this climate mess using the same strategies and system that created the mess in the first place. This is the same system that enriched a tiny segment of the population through its predatory and exploitive attacks on billions of people and the vital ecosystems on which we all rely.

Imagine what could happen if once a month, for 24 hours, people from around the world—citizens, neighbours, communities, and perhaps most importantly, voters—sat with their doubts as to how our so-called “leaders” are dealing with climate change. How they’re not respecting the science. How they’ve rallied behind an environmental fiction called “2050 net zero” which is nothing more than a PR stunt to delay climate action and keep the environmental plundering system in place.

A monthly holiday to think about who’s steering this ship and for whose benefit. A day to combat the tidal wave of misinformation coming from the corporate owned media and their puppet politicians. A monthly holiday that is all about unfiltered scientific truth — where we step out from the illusion that has been pulled over our eyes.

A day where we come to terms with the fact that the capitalist system is fundamentally flawed . It offers no financial reward (has no business case) for reducing global ecosystem destruction and passing along a functioning planet to the next generation.

Imagine what could happen if one day each month was set aside as a “Climate Wake Up Day”. A day where we peek behind the curtain and begin to come to terms with our reality. Unfortunately we’re not even close to that, because we make a fatal mistake. We look away, towards our busy lives and we let the propaganda machine back in to take us on a cozy little carpet ride of deception. Then we go back to our old ways of fighting for change. But that doesn’t work very well. Our best wins are for incremental change which is no longer a viable option to hold off devastating climate change. We need a deep shift in thinking — we need systems change and we need it now.

But it’s hard to get people to see something that requires them to accept that they’re not fully aware of their reality, that it’s all an illusion and that our worldview is the problem. The planet and everything that we take for granted is coming apart and it won’t fix itself with magic technology and incremental change (2050 net zero). The system itself is the source of our problem.

It Always Comes Back to the System

How can a system (capitalism) that rewards the exploitation of people and nature lead to societal wellbeing? Why would a corporation embedded within this system invest in activities that could reduce global harm with no clear opportunity for a return on its investment? The simple answer is that it wouldn’t, and it doesn’t. Capitalism doesn’t place value on the passing of a liveable planet to the next generation. In fact, it’s the opposite. Capitalism is a revolutionary force that exploits everything until exhaustion or collapse. 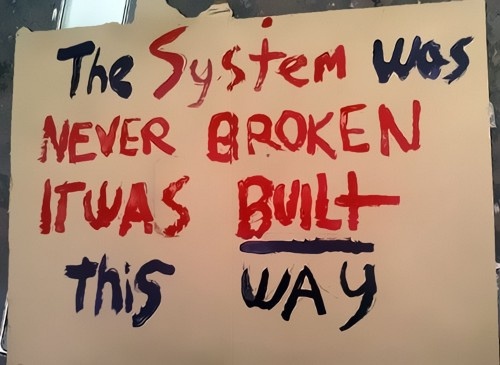 When left unchecked, Capitalism will always drift towards greater hoarding and inequality as the winners push harder and harder to keep their wealth growing. Capitalism doesn’t really allow for introspection as to whether more wealth accumulation is actually better for society — it’s not part of the equation. It’s a distraction from how the game of “capitalism” is played.

Now this is important. When the marketplace doesn’t allow for that wealth to continue growing at what they deem to be an “acceptable rate”, the “winners” look for other avenues to keep their wealth hoarding alive. And in the game of capitalism where wealth accumulation is the ultimate goal, the winners will use any means possible — even coaxing “corrupt” politicians to help them achieve their antisocial goals. And with that handshake you have the beginning of a society run by plutocrats — who have absolutely nothing in common with you.

A Choice For You and Your Family

The ruling elite wants us to think that we’re powerless and that we can’t change something as big as our economic system. But it’s not true. We have a choice to fight for something better. That’s the only way that we can create change . The ruling elite will never share — it goes against their hoarding tendencies. But first, you have to know what you want. In what kind of society do you want to live?

Society 1
A place where everyone is healthy, housed, safe and educated and where the opportunity to live a better life is available to everyone. A place that looks to achieve wellbeing for everyone because that’s what makes our lives better.

Society 2
A place dominated by unhealthy and poorly educated people where opportunities for the average person are surrounded by systemic obstacles. A place that encourages and rewards activities that exploit people and nature so that a tiny, minuscule number of people find it easier to hoard wealth, while simultaneously draining funds from essential government services. A place that encourages citizens to look out for themselves and to hoard what they can, in effect, to be the worst version of themselves.

Can The Truth Set Us Free?

Maybe being forced to accept the truth for just 24 hours a month, every month, could be the way to finally peel back the curtain and reveal the truth. Maybe this could be a starting point where we begin to see just how manipulated we’ve been. Maybe this could be the spark that wakes us up and gets us working together to ensure that we pass along a functioning planet to future generations? Maybe, but one thing is certain, capitalism won’t do it on its own, there’s no money in it.