Below 2C
Home Climate Climate Emergency The Farther Right You Vote, The More You Risk 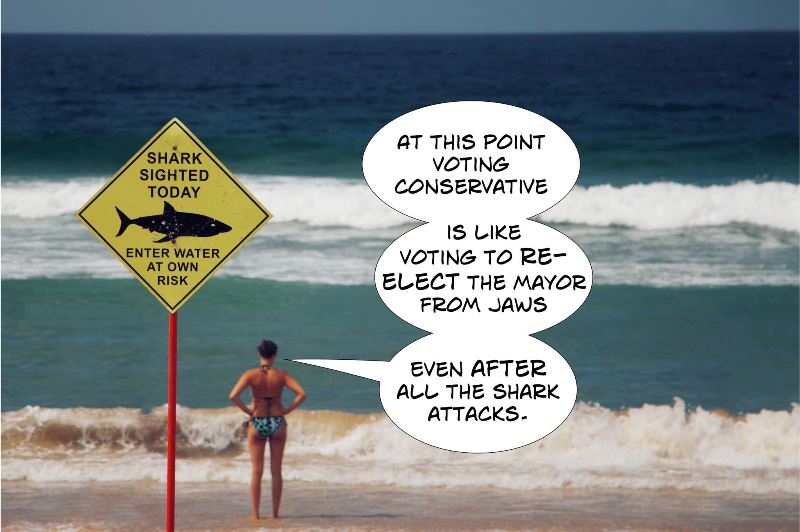 It’s been said that all we ever know for sure about the future is that it comes next. But sometimes the choice one makes can lead to a predictable outcome. In this 2021 federal election, the farther right you vote, the greater the climate risk, the COVID risk and the economic risk. — Editor

(In this post, previously published in Medium, Michael Nabert associates the right wing with an ideology of collapse.)

The Farther Right You Vote….the More You Risk

When Covid-19 arrived, it was possible that we would mask up, socially distance, contact trace, and otherwise take measures to stop it in its tracks and hopefully wipe it off the map. We didn’t do that. Instead we let a minority of science deniers and lack-of-virtue signallers decide for the rest of us that we were going to get the full throttle pandemic experience.

When public research developed effective vaccines, it was possible that we would enable the world’s population to confront the virus with immune systems armed with useful defensive antibodies, arresting the deadliness of the disease in its tracks to render it easier to handle. We didn’t do that either. Instead, our governments went to bat for big Pharma’s rights to deny the vaccine to most of the world and guarantee the proliferation of newer and more dangerous variants.

Now it’s here for good. You can expect Pfizer and Moderna to make billions every year with updated booster shot vaccines that try to stay ahead of emerging new variants, but this genie is never going to be backed into a bottle. The greedy and the ignorant decided for everyone else that we’d never have a world without this new pathogen ever again. For the greedy, this was the road to maximizing profits. For the angry and ill informed, endangering their own communities felt like a way to “own the libs” by calling it “freedom” to needlessly overwhelm their own health care systems. The political right did everything in its power to enable them along the way.

Now we’re all in the firing line. The World Health Organization and all of the people with actual PhDs in epidemiology told us that no one would be safe until we were all safe, so governments decided no one would be safe. An interesting, although completely unsurprising, thing happens when we compare the performance of different governments. We see very clearly that the more right leaning your government is, the greater the risk you personally face. The UK, Florida, Alberta. Point at a government that leans right and you’re also pointing at a higher COVID impact zone.

Right wing politics hasn’t only failed to protect lives, but actively obstructed efforts to do so. If a billionaire CEO could pocket an extra $50 by deliberately putting your life at risk, you can bet that conservatives would bend over backwards to force you to show up and put your life at risk. If your boss, like for example a school board, decided to listen to top doctors about how best to protect the lives of students in classrooms, the potentially infected spittle flying from the mouths of MAGA hat parents screaming that they knew where you lived was actually among the least of your worries. In a sane civilization, we’d have legislators and police departments working to keep those kinds of threats at least somewhat in check. Instead, because the illiterate and perpetually furious are the right’s dedicated voting base, governors bring down the hammer to hamstring every effort to enact even rudimentary safety efforts.

So when an unprecedented economic crisis comes along and citizens need financial aid just to keep food on the table, you can count on the right to shrilly complain that they feel helping people was wrong headed. When the pandemic underscores how important a robust health care system is, the right does things to pick fights with nurses and doctors and move to dismantle public health care systems. When fossil fuel dependence endangers our entire economic system and promises to hamstring our economy, they angrily double down on considering it heresy to move away from fossil fuels.

When climate change is hammering us like never before with much worse clearly to come, even in 2021 the right is so entrenched in denial that it still can’t even bring itself to admit that climate change is real. What’s worse, even when they finally begin to acknowledge the issue, they inevitably find ways to make things even worse. It doesn’t matter how many sacrifices you make to help them or give them what they want, they still spread the most outrageous lies and treat the left as to blame for all of their woes, because treating us as a punching bag is all they know.

It’s not an ideology any more. At this point, it’s much closer to a death cult. The cruelty is definitely the point, and there’s no interest in governing in the public interest, merely in dismantling public institutions that serve that function. Unfortunately, hyperpartisan political tribalism has taken the place of rational approaches to evidence and the Overton window has been dragged so far towards self destruction that efforts at bipartisanship are more akin to hostage negotiation. As today’s ecological challenges require human cooperation on an unprecedented scale like never before, we seem destined to spend our last days futilely trying to convince an angry mob that “freedom” means something more than the right to give other people the finger and drag them over a cliff into oblivion.

I recommend you vote accordingly.

ICYMI:
Dear Adults: You Are Failing Us On A Global Scale
The Latest IPCC Report Is A Mental Health Minefield
Canada: A Model of Climate Denial in Action