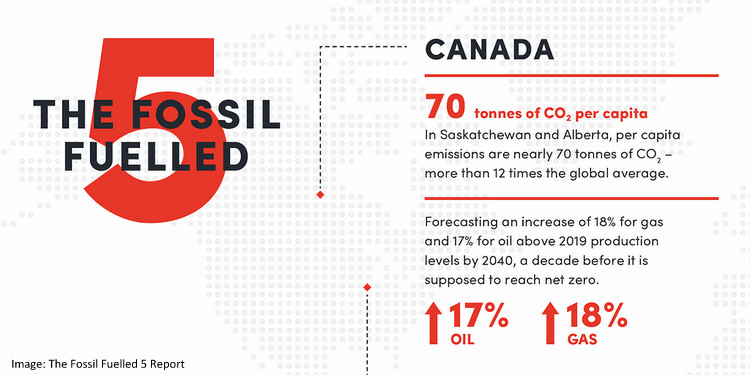 Five countries are accelerating the climate emergency according to the The Fossil Fuelled 5 report which “examines five wealthy nations—the US, Canada, Norway, Australia and the UK—that have a widening gap between their rhetoric on climate action and their plans to expand the production of fossil fuels. The paper gives a snapshot of how each is undermining global efforts to address the climate crisis. These countries are planning to approve and subsidize new fossil fuel projects which undermines their recent claims of leadership in addressing the climate crisis. – Press Release, November 12

(This piece is sourced from the Fossil Fuelled 5 report, summary and press release.)

The report synthesizes the most recent government emissions pledges and compares them to the fossil fuel production plans in the coming decade, as well as other factors such as fossil fuel subsidies. They show that several of the world’s wealthiest nations “are doubling down on fossil fuel production” which will “have disastrous impacts for all life on our planet, but especially those communities in the Global South who have done the least to create this crisis and have the fewest resources to adapt to its impacts.”

Despite their historical responsibility for emissions, and being well-placed to finance a global just transition, these countries are also guilty of exporting large amounts of coal, oil and gas, fueling other countries’ dependency on dirty energy sources. — FFF5 Comms Pack

Findings of the report

Canada is looking to increase their price on carbon but also provided approximately $17 billion in public finance to three fossil fuel pipelines between 2018 and 2020.

United States: The US has pledged to halve emissions by 2030 yet have simultaneously provided $20 billion in annual support to the fossil fuel industry.

United Kingdom: Despite hosting COP26, the UK is expected to green light the Cambo oil field, which contains approximately 255 million barrels of oil.

Norway has raised their ambition to decrease emissions but has already granted 60+ new licenses for fossil fuel production and access to 84 new exploration zones in 2021 alone.

Australia: Despite their recent commitment to net zero by 2050, Australia has over 100 fossil fuel projects currently in the approval pipeline.

Need to ramp up ambition and lead

These wealthy nations should be the first to ramp up ambition and take a leading role in winding down fossil fuel production and end the era of fossil fuels by:

“Canada claims to be a climate leader yet its emissions have continued to rise since signing the Paris Agreement. This is not surprising given the unwillingness of political leaders to address the largest source of emissions – oil and gas. While important steps have been taken such as putting a price on carbon nationally, the Canadian government subsidizes the sector more than any other G20 nation. The Fossil Fuelled 5 report highlights why Canada is standing in the way of binding agreements for a wind down of oil, gas and coal at COP26.”

“There’s an alarming gap between what wealthy nations are saying and what they are doing. You would expect these five nations to provide the leadership needed to move the global economy away from fossil fuels and reduce emissions to zero. However, they seem to be quite content to make pledges and promises with one hand, while expanding and subsidising fossil fuel production to the tune of billions on the other.”

Enough coal, oil and gas is already under production in existing mines and wells today to take humanity well beyond 1.5°C if burnt. Yet, despite this, governments around the world are expected to produce more than twice the amount of fossil fuels by 2030 that is consistent with keeping the 1.5°C target alive.

If these nations want to be climate pioneers, it is time they addressed the elephant in the room: fossil fuels.”

ICYMI:
History Will Show Glasgow As the Place Where the 1.5°C Goal Went To Die
Will New Climate Pledges Keep 1.5°C Alive