Below 2C
Home Climate Climate Crisis History Will Show Glasgow As the Place Where the 1.5°C Goal Went... 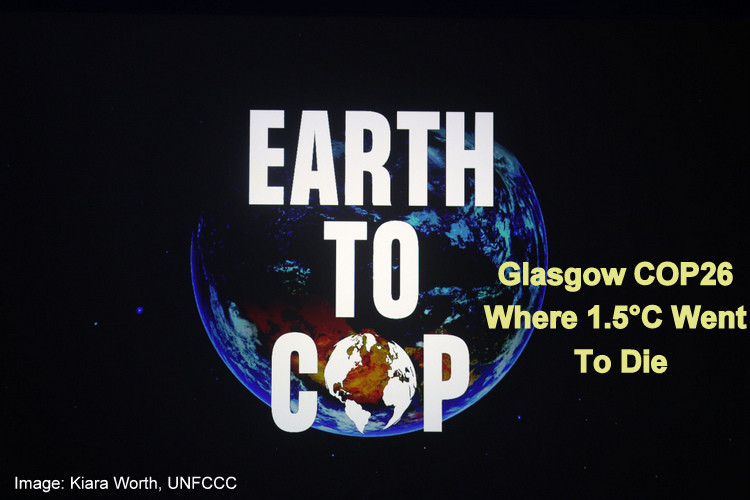 History may very well remember Glasgow (COP26) as the place where the 1.5°C goal went to die.  COP26 has failed us and the UK’s goal to “keep 1.5°C alive” is now just “hanging by a thread” or on “life support” admit UN officials.

“No more blah, blah, blah. No more whatever the f*** they are doing inside there…” — Greta Thunberg at COP26 in Glasgow

The challenges going into COP26 were enormous. The planet has already warmed by 1.1°C and global emissions continue to spiral out of control. Pre-Glasgow commitments by countries—based on the Paris Agreement—put the world on a 2.7°C warming trajectory when what is needed to avert the catastrophic effects of climate change is warming no greater than 1.5°C.

A Carbon Brief analysis shows that if countries meet both conditional and unconditional  nationally determined contributions (NDCs) for the near-term target of 2030, projected warming by 2100 falls to 2.4°C. Clearly the ratcheting up of global commitment expected after Paris 2015—a paltry 0.3°C improvement—has not occurred. It’s nowhere in site and the world’s climate has deteriorated even further. We are now in a code-red climate emergency.

“We’ve been told that we have to wait another year for the next COP27 in Egypt before anything can happen.” – Peter Carter

“The underlying truth is that COP is not going to save us…after 26 years of climate policy failure, emissions are still rising and we need to find another way.” – Nick Breeze

“Maybe incrementally some things are being done but not to the urgency that we demand and require in order to save this planet…the politicians and the world leaders seem to be the last ones understanding the extent of this climate emergency.” – Paul Beckwith

“This COP will go down in history as the COP that killed 1.5 degrees. It is not true that 1.5 degrees has been kept alive…it’s not even on life support…It’s not one minute to midnight, it’s not midnight, it’s five past midnight. – Rupert Reed

“Our governments are not planning to save us…We must mark and narrate this infamous moment in human history, the moment where 1.5 became consigned to history and where it became clear that no one’s coming to save us.”  – Rupert Reed

“The Glasgow Climate Pact, for all its restrained and diplomatic language, looks like a suicide pact. After so many squandered years of denial, distraction and delay, it’s too late for incremental change,” writes George Monbiot in the Guardian.

Not surprisingly, the fossil fuel industry was the big winner at COP26. Its 500 plus lobbyists—lurking around the backrooms and the hallways—were able to water down text and block oil producing countries from taking meaningful action. The lack of climate ambition from world leaders has been exploited by the fossil fuel sector during all 26 COPs to date. And this will not change until fossils are banned from future climate summits. But don’t hold your breath. The house is rigged and the house always wins.

BOGA (Beyond Oil and Gas Alliance) – only seven countries have joined this new coalition committed to ending oil and gas extraction — Costa Rica, Denmark, France, Greenland, Sweden, Wales , Ireland and the province of Quebec. BOGA also has associate members such as California, Portugal and New Zealand.

However, none of the world’s biggest producers—the U.S., Saudi Arabia, Russia, Canada—have joined, while the U.K. (COP26 host) refused to sign on. The core BOGA members account for an insignificant 0.2% of global oil production according to Climate Home News.

“But these days, apparently, it is perfectly acceptable to claim you are going all-out to push the “renewable energy” button while you import oil to refine it, as Quebec does, or import it in a refined state as Costa Rica does, or in the case of Denmark, extract it for sale to others,” writes Parket Gallant in the The Financial Post.

Coal – India’s last-minute change to the Glasgow Pact to “phase down” but not “phase out” coal is quite ironic considering the severe smog emergency in Delhi. The thick blanket of pollution is said to have the same effect as smoking 20 cigarettes per day.

India and China mine a combined “14 million tons of coal per day, and account for 95% of the new coal-fired power plants brought online over the last decade,” reports The Energy Mix.

“This summit has been a triumph of diplomacy over real substance. The outcome here reflects a COP held in the rich world, and the outcome contains the priorities of the rich world. Not only did developed countries fail to deliver the long promised US$100 billion of climate finance to poorer countries, but they have also failed to recognize the urgency of delivering this financial support. They claim to want urgency on emissions reductions, yet they continue to expand fossil fuel production within their own borders.” – Mohamed Adow, Director, Power Shift Africa

“Despite the science, the energy, enthusiasm, and passion of communities, activists, environmental defenders, and NGOs both in Glasgow and across the world, global leaders at COP 26 have failed to put people and the planet ahead of profits and vested corporate interests.” – Seema Joshi, Director of Campaigns, Global Witness

The small gains at COP26 do not make up for its glaring failures. COP26 is leaving the toughest issues for COP27 next year in Sharm El-Sheikh, Egypt, the largest oil producer in Africa.

“If COP27, slated for next year in Egypt, could figure a way to harness hypocrisy to generate electricity, it might well be the last COP the world would ever need.”  – Parket Gallant