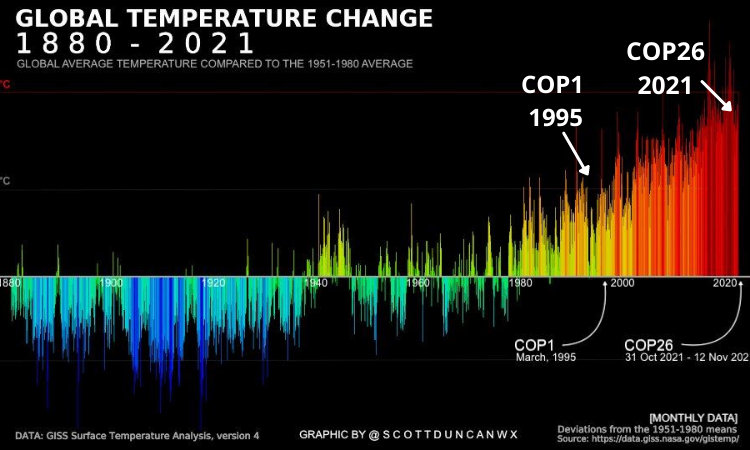 In its post-COP26 analysis, Carbon Brief presents an in-depth summary of all the key outcomes in Glasgow. It provides an overview of the summit, looks at formal negotiations around the COP and the road to COP27. This post consists of excerpts from two sub-sections: new climate pledges from COP26 and the road to COP27.

Are the new climate pledges enough?

COP26 saw a flurry of new assessments on what existing and newly updated promises mean for limiting global warming to the Paris Agreement’s aspirational goal of 1.5C.

Carbon Brief took a deep dive into the latest numbers, looking at what they refer to, where different groups agree and disagree on likely outcomes, and the potential impact of new long-term net-zero promises.

Current policies in place today will lead to a best-estimate of around 2.6C to 2.7C warming by 2100 (with an uncertainty range of around 2C-3.6C).  If countries meet both conditional and unconditional nationally determined contributions (NDCs) for the near-term target of 2030, projected warming by 2100 falls to 2.4C (1.8C-3.3C).

Finally, if countries meet their long-term net-zero promises, global warming would be reduced to around 1.8C (1.4C-2.6C) by 2100, though temperatures would likely peak around 1.9C in the middle of the century before declining.

In addition to the revised NDCs, there were a series of announcements at COP26 – including the global methane pledge and an accelerated coal phaseout, as well as business pledges as part of the Race to Zero campaign.

Carbon Brief’s analysis found that these new announcements – combined with recent updates to NDCs – have likely shaved an additional 0.1C warming off what was implied under commitments out to 2030. Similarly, India’s new “net-zero by 2070” pledge reduces projected global temperature rise by around 0.2C – if all countries meet their long-term net-zero promises.

The extent to which the many new and revised targets will be met – particularly long-term net-zero promises – will depend on whether they are translated into meaningful near-term commitments. So far, the lack of stronger commitments for emissions cuts by 2030 has created a “very big credibility gap” for net-zero promises, according to Climate Action Tracker. Being unable to bend the emission curve downwards this decade puts huge pressure on the remaining carbon budget for “keeping 1.5C alive”.

The road to COP27 in Egypt – key meetings

This post follows the History Will Show Glasgow As the Place Where the 1.5°C Goal Went To Die article which is highly critical of the COP process. As a result of sabotaging by the fossil fuel industry, the lack of climate leadership and the hypocrisy of rich nations, COPs will not solve the climate crisis. World leaders lack the ambition needed to match the scope and magnitude of the climate problem. When the global climate movement reaches a critical threshold, and only then, will world leaders follow.

“If COP27, slated for next year in Egypt, could figure a way to harness hypocrisy to generate electricity, it might well be the last COP the world would ever need.”  – Parket Gallant

ICYMI:
History Will Show Glasgow As the Place Where the 1.5°C Goal Went To Die
Fossil Fuel Lobbyists Outnumber Any National Delegation at Climate Summit