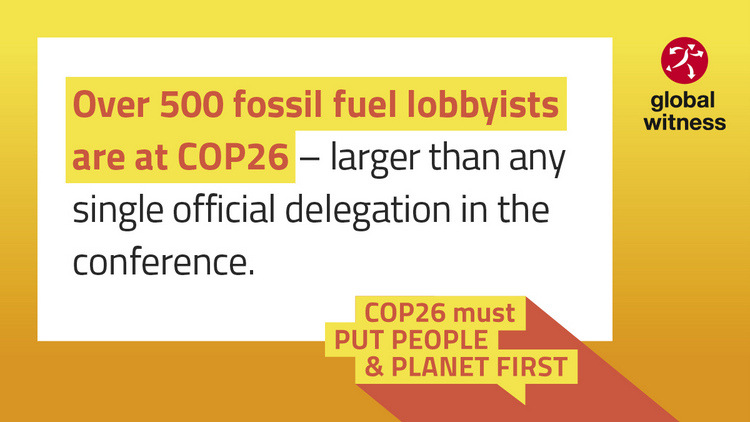 The BBC is reporting that the fossil fuel industry has the largest delegation at the COP26 climate summit. “The fossil fuel industry has spent decades denying and delaying real action on the climate crisis, which is why this is such a huge problem,” says Murray Worthy from Global Witness. “Their influence is one of the biggest reasons why 25 years of UN climate talks have not led to real cuts in global emissions.”

(This piece is sourced from the media release issued by Corporate Accountability, CEO, Glasgow Calls Out Polluters and Global Witness.)

At least 503 fossil fuel lobbyists, affiliated with some of the world’s biggest polluting oil and gas giants, have been granted access to COP26, flooding the Glasgow conference with corporate influence.

Data analysis of the UN’s provisional list of named attendees by Corporate Accountability, Corporate Europe Observatory (CEO), Glasgow Calls Out Polluters and Global Witness, reveals the scale at which corporate actors with a stake in the continued burning of fossil fuels have been enjoying access to these critical talks. Researchers counted the number of individuals either directly affiliated with fossil fuel corporations, including the likes of Shell, Gazprom and BP or attending as members of delegations that act on behalf of the fossil fuel industry.

This news comes as groups around the world, many from countries that bear the brunt of climate impacts, have criticised unequal access to COP26, citing barriers to participation, amidst vaccine apartheid, costly travel restrictions and a lack of safeguarding guarantees.

“With the world quickly running out of time to avert climate disaster, this COP absolutely must be a success. The case for meaningful global action must not be diverted by a festival of polluters and their mouthpieces, who have no interest in seeing the changes we need to protect people and the planet.”

“The presence of hundreds of those being paid to push the toxic interests of polluting fossil fuel companies, will only increase the scepticism of climate activists who see these talks as more evidence of global leaders’ dithering and delaying. The scale of the challenge ahead means there is no time for us to be diverted by greenwashing or meaningless corporate promises not matched by delivery. It’s time for politicians to show they are serious about ending the influence of big polluters over political decision-making and commit to a future where expert and activist voices are given centerstage.”

“COP26 is being sold as the place to raise ambition, but it’s crawling with fossil fuel lobbyists whose only ambition is to stay in business. The likes of Shell and BP are inside these talks despite openly admitting to upping their production of fossil gas. If we’re serious about raising ambition, then fossil fuel lobbyists should be shut out of the talks and out of our national capitals.”

“Instead, it is governments and communities from countries most affected by climate change that are finding themselves shut out, despite the UK claiming it has ensured an in-person and inclusive climate summit. Clearly that ambition only stretches as far as the fossil fuel industry. We need fossil free politics.”

“Cop26 has to be about keeping fossil fuels in the ground. All else is distraction.” — George Monbiot

“The architects of the climate crisis cannot build a livable and just future when they’ve already burnt the house down. With Big Polluters in the building and so many of those on the frontlines left outside due to vaccine apartheid—COP26 is compromised. It is people on the front lines of this crisis, not polluters, who have the life raft we need at this moment.”

The presence of lobbyists at COP does not end with the fossil fuel industry. Other polluting industries deeply implicated in the climate crisis, such as finance, agribusiness, and transportation are also present, although they are generally not included in this analysis.

These new findings build on calls in recent years to protect the integrity of the UN’s climate negotiations by establishing clear conflict of interest policies. Over recent years countries collectively representing almost 70% of the world’s population requested these conflicts of interest be addressed.

Corporate Accountability, CEO, Glasgow Calls Out Polluters and Global Witness recommend a policy that clearly excludes organisations that have financial or vested interests in the production or burning of fossil fuels.

ICYMI:
World Leaders: We Will Not Accept More Empty Promises
Frankie the Dinosaur Says Listen Up People: Don’t Choose Extinction
12 Reports You Should Know About As COP26 Unfolds