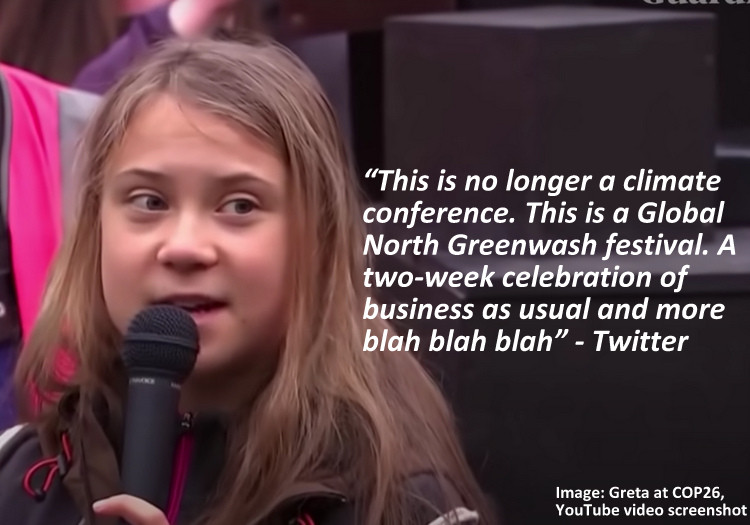 The optimism and celebration coming from a whirlwind of funding and program announcements during the first days of COP26 are quickly vanishing as climate policy experts drill deeper into the narrative. Bloomberg observes that many of the manor announcements “unravel under close scrutiny” casting doubt on the value of new commitments taken by world leaders amidst claims of more empty promises by activists like Greta Thunberg.

(The following article by Kathleen Moleski of GASP (Grandmothers Act so Save the Planet) warns world leaders that the world cannot tolerate more empty promises. It was written as an OpEd and updated as events at COP26 unfolded during the first five days.)

I vividly remember my first experience of ‘eco-anxiety’, acute worry about the consequences of unchecked climate change. It was 1992, a few months before my daughter was born. Standing under the carport with my husband, I watched the rain coming down in vast sheets, as if one huge bucket of water was being dumped on our small corner of the world. It was deeply frightening.

By coincidence, that same year the United Nations convened a special environment conference in Brazil called the Earth Summit. Part of the final accord was to launch an annual Conference of the Parties (COP) to solve the planet’s mounting climate problems. The first COP was held in Berlin in March 1995.

Fast forward to 2021, and as regular readers of Below2C know, the 26th edition of COP is now taking place in Glasgow. Yet unbelievably, after 25 years of global negotiations, dialogues and endless talks, we are in drastically worse climate straits than ever before. The world is now contending with far heavier deluges than the one I witnessed in 1992, plus more severe floods, heatwaves, wildfires, droughts and extreme storms, with worse to come.

Of course we should have started three decades ago to wean ourselves off fossil fuels and begun the shift to climate-stabilizing green energy. Instead, we got stuck in a dismal scenario where many of the world’s nations, especially rich industrial ones, Canada among them, repeatedly made lofty promises they failed to act on or achieve. Meanwhile, the fossil fuel industry, led by Exxon, rushed to bury its own scientific evidence that burning coal, oil and gas heated the planet; then, like the tobacco industry, spent lavishly to spread misinformation about its products, thus stalling significant action for decades.

Warnings are piling up…

Ahead of COP26, climate scientists have urgently warned that there are less than 10 years to reduce our greenhouse gas emissions by half to avoid almost certain climate chaos. In May, the International Energy Agency (IEA) made it clear: no new fossil expansions, none, if we want to stay under 1.5ºC of warming. In early August, the UN released its latest scientific assessment report on climate, painting such a dire picture that it was flagged by UN Secretary General Antonio Guterres as ‘code red for humanity.’ Then, in mid-October, the United Nations Environment Program (UNEP) Emissions Gap report strongly indicated the world is on course to warm to around 2.7C with hugely destructive impacts; ‘another thundering wake-up call,’ Guterres said.

Half way through COP26, the pledges by nations attending Glasgow to cut their emissions still fall far short of what’s needed to stay on the 1.5ºC track.

Canada’s own past record is dismal: we rank tenth in the world in greenhouse gas (GHG) emissions and have never yet met a single emissions reduction target we’ve set. Our new climate accountability law, Bill C-12, passed in late June, suggests we’re taking a major step toward redeeming ourselves, and we’ve boosted the goal of reducing our GHG emissions to a 40-45 per cent reduction compared to 2005 levels by 2030, up from a tepid 30 per cent. Critics say to do our fair share, we need to achieve the 60 per cent mark.

Prime Minister Justin Trudeau stepped up at COP26 to reiterate his election promise of imposing a hard cap on emissions from the Canadian oil and gas sector, joined blocks of other nations pledging methane emission reductions, an end to deforestation, no more funding of international fossil fuel projects – all necessary – but it’s hard not to be skeptical given past empty promises.

My eco-anxiety? It has increased as the climate crisis has accelerated but eased temporarily when I landed a job at TD Bank in 2004. I felt some relief thinking I was joining a stellar Canadian company making a real difference on the environmental front. As I observed over the years, however, TD’s green initiatives, such as tree plantings, Friends of the Environment Foundation community grants and a variety of internal steps to shrink the bank’s own energy footprint, all paled in comparison to its role as a top 10 funder of fossil fuels among all private banks worldwide.

TD is not alone. Together, the Big Five Canadian banks, RBC, Scotia, CIBC, BMO and TD, have invested close to CAD $700 billion in fossil energy since the Paris Climate Agreement was signed in 2015. In the past year, all have pledged to achieve net-zero greenhouse gas emissions by 2050 and recently signed on to the Glasgow Financial Alliance for Net-Zero, spearheaded by former Bank of Canada governor Mark Carney.

Positive steps, yes, but not enough, or fast enough, and given their recent history, can our banks be trusted to deliver? Transparent short-term targets and roadmaps are critical, plus actions such as the step taken in mid-October by France’s La Banque Postale, the first bank in the world to announce it will halt financing fossil expansions by 2030. All banks everywhere need to follow suit, and preferably sooner.

As for my eco-anxiety, I know I’m not alone. According to a recent British poll, fear about the dire consequences of the climate crisis reach well beyond young people like Greta Thunberg and millions of youth around the world, with extreme anxiety and depression about climate change now being experienced by all ages and income levels. Most poll respondents believe it will have far more serious consequences than COVID, which has preoccupied us for the past 20 months.

Like Greta and others, I have found the best antidote to my eco-anxiety is getting involved and taking action. By the time I retired from TD last January, I decided I would devote much of my newfound time to climate advocacy, urging Canada’s political parties to work urgently across party lines on climate action and our banks to divest from fossil fuels.

But the real cure is obvious: for all 197 nations attending COP26 to do everything it takes to guarantee the world can finally turn the tide on this downward spiral to human extinction. It’s a monumental, some say impossible, challenge, but the alternative is unthinkable and simply terrifying, especially for our kids and grandchildren.

(Kathleen Moleski is Chair of the Fossil Fuel Divestment Committee, Grandmothers Act to Save the Planet, www.gasp4change.org. She is a recent retiree of TD Bank and now devotes most of her new found time to climate advocacy. She is also a co-leader of the For Our Kids Mississauga, Oakville, Burlington, Hamilton (MOBH) chapter, supports Leadnow and other climate activist groups and signs many petitions.)