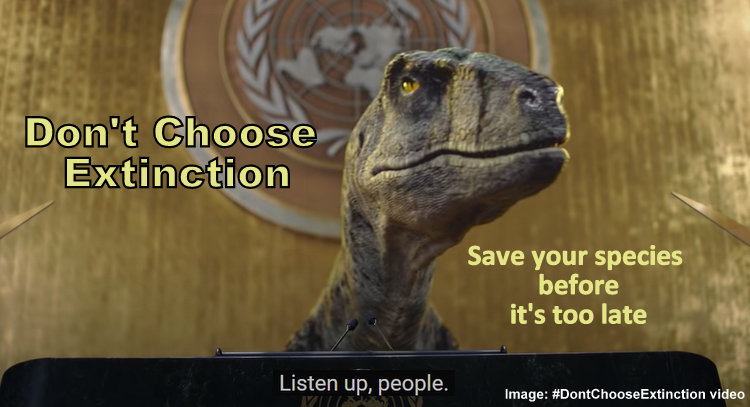 Did you know that our governments around the world actively support the destructive fossil fuel industry with $11 million in subsidies per minute? That means more than $70 billion (and counting) since the start of the UN Climate Summit in Glasgow. Frankie the dinosaur has a message for us. Don’t Choose Extinction!

We Don’t Have Time is partnering with United Nations Development Programme (UNDP) in  the global #DontChooseExtinction campaign to urge world leaders to abolish all fossil fuel subsidies.

In the #DontChooseExtinction video, Frankie bursts into the UN General Assembly Hall and tells the audience of shocked and bewildered diplomats and dignitaries that “it’s time humans stopped making excuses and started making changes” to address the climate crisis.

As the sole survivor of the grandest species to ever walk the earth, Frankie knows a thing or two about extinction.

“At least we had an asteroid,” the dinosaur warns, referring to the popular theory explaining dinosaurs’ extinction 70 million years ago. “What’s your excuse?”

According to a new IMF analysis, subsidies added up to $5.9 trillion in 2020, or about 6.8 percent of global GDP. And the number is expected to rise to about 7.4 percent in 2025. UNDP research released as part of the campaign shows that the world spends an astounding US $423 billion annually to subsidize fossil fuels for consumers.

To put a spotlight on how these subsidies fuel the climate crisis, UNDP (United Nations Development Program), launched the global campaign #DontChooseExtinction just before the start of COP26 in Glasgow. In a humoristic and engaging short film, UNDP brings back a dinosaur to the UN General Assembly to challenge our world leaders and explain why financing mankind’s extinction is a bad idea.

Frankie highlights how financial support for fossil fuels through subsidies— taxpayers’ money that helps keep the cost of coal, oil and gas low for consumers—is irrational and illogical in the face of a changing climate.

“Think of all the other things you could do with that money. Around the world people are living in poverty. Don’t you think that helping them would make more sense than… paying for the demise of your entire species?” Frankie says. The amount spent on these subsidies could pay for::

The energy sector, powered by fossil fuels (coal, oil, electricity that is generated by burning other fossil fuels, and gas) accounts for 73% of human-caused greenhouse gas emissions.

The discussions on Day 3 centered on ending the financing of fossil fuel projects abroad (an initiative promoted by the UK), the Beyond Oil and Gas Alliance led by Denmark and Costa Rica, ending coal-fired power generation, stopping the building of new coal plants, the cracking down on methane emissions, the pricing of carbon, the trading of carbon emissions, carbon offsets and the need to drastically increase renewable energy resources.

“Flagship finance pledges aimed at achieving net-zero at some point in the future are ‘resolutely ignoring’ the elephant in the room that is fossil fuels, campaigners and climate activists have warned” reports CNBC. They are missing the point.

“An alliance on climate with no fossil fuel criteria in its guidelines is like an anti-smoking coalition which doesn’t address cigarettes,” says Bill McKibben, author and co-founder of 350.org.

It will be impossible to deliver on Paris until there is a gradual reduction in the financing of new fossil fuel infrastructure combined with a massive upshift on green investment. And that must begin with the removal of all subsidies to fossil fuels. But missing from Finance Day was an in-depth drilling down on the phasing out of fossil fuel subsidies.

Justin Trudeau’s love-hate relationship with oil is well known. It started in Paris with Trudeau announcing that Canada was back on the climate front only to approve pipelines shortly after returning home. And at this COP, it’s no different—”Using his speech on Day 1 of COP26 in Scotland to boast about Canada’s climate record and encouraging other countries to follow suit. Yet Canada is one of the largest oil-producing nations in the world and a heavy emitter,” reports CBC news.

“Even governments that acknowledge the severity of the climate crisis have put off the politically hard decisions on a fossil fuel phase-out,” says Keith Stewart, a senior energy strategist with Greenpeace Canada.

A recent Oil Change International analysis shows that Canada provides more financial support to fossil fuel producers than any other developed country while renewable energy gets less than in any other G20 country.

Watch the We Don’t Have Time fossil fuel counter here. It tallies subsidies to fossils since the start of COP26 to the middle of Day 4.

(This article is resourced from We Don’t Have Time and the United Nations Development Programme (UNDP) campaign Tool Kit.)

ICYMI:
What Is So Special About COP26 in Glasgow
12 Reports You Should Know About As COP26 Unfolds
Fossil Production Dangerously Out of Sync With Paris 1.5°C Limit