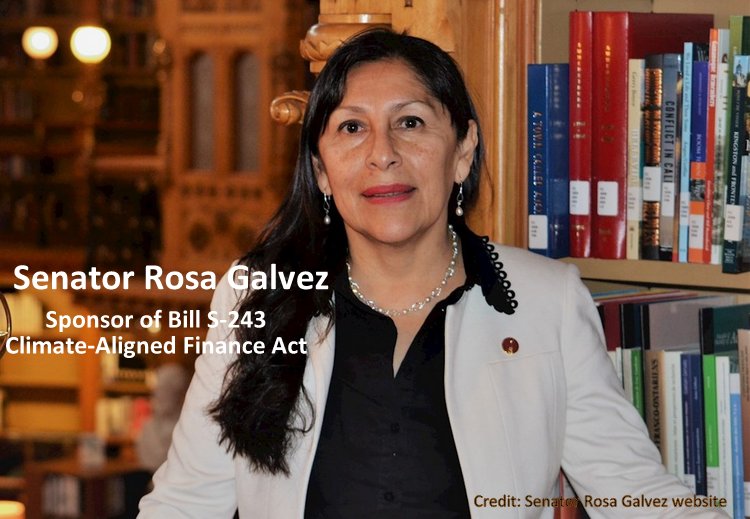 “Leaders like Sen. Rosa Galvez are crafting policy to demand that our financial sector become more transparent. Bill S-243 would serve to protect citizens investment’s from the risks that financial institutions have not included in their decision-making,” writes Aislinn Clancy in a recent opinion piece (featured below) published widely in the Hamilton Spectator, the Waterloo Region Record and other Metroland papers.

How are our financial institutions doing in the quest to decarbonize finance?

The pressure is on. Citizens are demanding that their governments, and now financial institutions become more transparent about how they interact with the oil and gas sector.

As the climate crisis intensifies, and the pledges to cut emissions grow, people want to know if investors and banks are keeping their promises of cutting emissions or greenwashing to protect the status quo.

The “trust us” approach of the past has led us to a climate crisis that we can no longer ignore. — Aislinn Clancy

I’ve often felt patted on the head or misunderstood when I bring this up with my bank or pension plan. I’ve found that many who work in the sector have limited understanding of divestment, “stranded assets,” “risk due to climate” and the anticipated impact of climate change on their business model.

I encourage you to make an appointment with your bank manager or pension provider and ask them. Demands to shift where the dollars go have become louder and leaders in the financial sector are being pressured to make changes in how they invest.

Are Pension Funds starting to listen?

Years ago, OMERS (my pension) was limited in how they responded to questions posed about the risks due to climate change, but now they are setting targets and taking steps toward those targets. OMERS recently set a goal of becoming net zero by 2050. OMERS announced last week that it’s selling its stake in the largest gas-fired cogeneration plant in the United States. The sale marks the third time in the last year that OMERS has divested a major fossil fuel asset.

These are signs that OMERS has heard beneficiary concerns and begun to reduce its exposure to high-carbon assets.

Can we say that for others in the sector? How do the banks and other pension plans rank?

Thankfully, leaders like Sen. Rosa Galvez are crafting policy to demand that our financial sector become more transparent. Bill S-243 would serve to protect citizens investment’s from the risks that financial institutions have not included in their decision-making.

For example, new fossil fuel exploration would have a higher risk than an investment in renewable energy. It demands transparency from those investing with taxpayer dollars and ensures that the federal government is not passive (CPP etc.).

It is now clear after the fallout from the 2008 stock market crash, that there is a need for policies that force financial institutions to act responsibly. Without policies that keep the climate crisis in mind, problematic oil and gas investments are favoured and could leave Canadians stranded when pensions and savings are exposed to “sudden and large losses” as the central bank puts it.

The “trust us” approach of the past has led us to a climate crisis that we can no longer ignore.

I feel that it is through a combination of civic engagement, education and public policy that we can ensure good behaviour of investors.

As a business school grad, the focus was on profits and shareholder gains, not so much social justice and environmental responsibility. The price of my pension should not just be measured in dollars and cents that might be earned in the next five years, but how life can be for my kids and grandkids.

My kids, and generations to come will suffer the legacy of harmful investments that create an unlivable planet. Bill S-243 and public pressure from organizations like Shift Action for Pension Wealth and Planet Health are important to continuing to educate and demand that financial institutions prioritize smart long-term investments in planetary survival.

“We’ve seen a major ramping up of net-zero commitments from the public and private sector, but we must face the elephant in the room: our financial system continues to fund activities that fuel climate risk. Canadians are asking for legislative solutions that will help accelerate the transition and achieve our targets. The only scenario in which our financial sector will thrive and prosper for generations to come is the one where we pursue a coherent and orderly transition.”
– The Honourable Senator Rosa Galvez, Ph.D., P.Eng., FEC, FCSCE

ICYMI:
Individual Actions Can Reduce Pollution by Twenty Five Percent
This Is A Very Good Deal For The Climate
Climate Solutions From Around the World