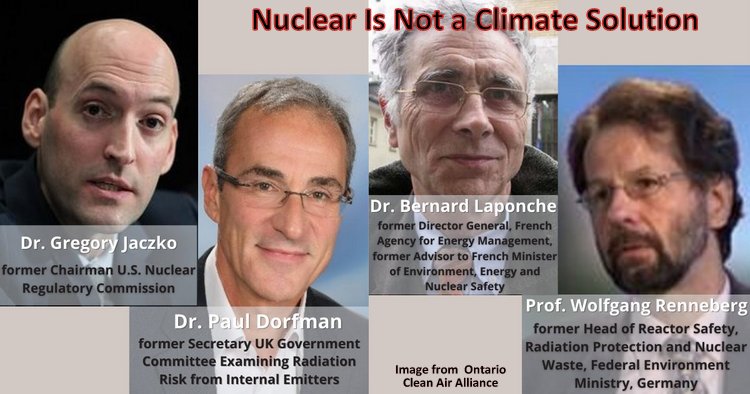 Nuclear is not a strategy that will help with the climate crisis. Renewables are a better alternative to nuclear small modular reactors for two main reasons: cost and speed of deployment. While the costs of renewables are plummeting, nuclear costs have steadily been on the rise. And during a climate emergency and Canada’s dash to a 40-45% emissions reduction by 2030, renewables can be set up much faster and more reliably.

This post features a statement issued by former US, German and French experts in nuclear regulation and radiation protection. Dr. Gregory Jaczko, Professor Wolfgang Renneberg, Dr. Bernard Laponche and Dr. Paul Dorfman authored Nuclear is not a practicable means to combat climate change which is reproduced below.

Nuclear is Not a Climate Solution

The climate is running hot. Evolving knowledge of climate sensitivity and polar ice melt-rate makes clear that sea-level rise is ramping, along with destructive storm, storm surge, severe precipitation and flooding, not forgetting wildfire. With mounting concern and recognition over the speed and pace of the low carbon energy transition that’s needed, nuclear has been reframed as a partial response to the threat of global heating. But at the heart of this are questions about whether nuclear could help with the climate crisis, whether nuclear is economically viable, what are the consequences of nuclear accidents, what to do with the waste, and whether there’s a place for nuclear within the swiftly expanding renewable energy evolution.

As key experts who have worked on the front-line of the nuclear issue, we’ve all involved at the highest governmental nuclear regulatory and radiation protection levels in the US, Germany, France and UK. In this context, we consider it our collective responsibility to comment on the main issue: Whether nuclear could play a significant role as a strategy against climate change.

The central message, repeated again and again, that a new generation of nuclear will be clean, safe, smart and cheap, is fiction. The reality is that nuclear is neither clean, safe or smart, but a very complex technology with the potential to cause significant harm.

Nuclear isn’t cheap, but extremely costly. Perhaps most importantly nuclear is just not part of any feasible strategy that could counter climate change. To make a relevant contribution to global power generation, up to more than ten thousand new reactors would be required, depending on reactor design.

In short, nuclear as strategy against climate change is:

Gordon Edwards is a Canadian scientist and nuclear expert—and also a self-declared nuclear sceptic—who submitted the following response to the Minister of Environment and Climate Change consultation that ended on January 21:

New nuclear reactors currently proposed are too slow and too costly to make a significant difference in reducing carbon emissions by 2030. Wind and solar are cheaper and faster to deploy and are also field tested, unlike any proposed new reactors. Renewables can make an impressive contribution by 2030, and more so by 2050, with widespread deployment. New nuclear can contribute very little before 2030, especially since the proposed nuclear designs are first-of-a-kind prototypes subject to unanticipated delays and cost escalations. — Gordon Edwards

More on the authors of the communique: