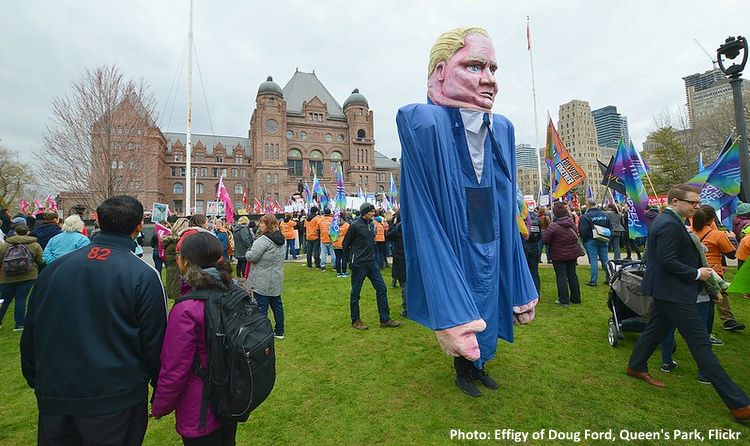 The eventual success (or failure) of Canada’s climate plan depends on each of the ten provinces and three territories doing their respective share of the heavy lifting. Under Doug Ford, Ontario has fallen into a climate action blackhole where everything is going backward. With 39% of Canada’s population and roughly 38% of the country’s GDP, Ontario must do more. This article by David Robertson was previously published in The Energy Mix.

As the International Energy Agency points out in its report this week, how provinces respond to the climate emergency has a huge bearing on whether Canada as a whole will achieve its 2030 climate targets. And by any accounting, Ontario is a climate laggard, more a climate hooligan. The reason is Premier Doug Ford’s Conservative government.

In a federation such as Canada, emission reduction targets are a patchwork quilt of provincial ambition, originally because the Harper government’s decade of inaction and outright hostility left each province and territory to chart its own course on climate. And so, to this day, provincial comparisons are fraught with different targets and dissimilar base years. But Ontario is still a standout, and not in a way that any government should want to be.

When Ford was elected, his government trashed the previous government’s climate initiatives. In their place he set a target to reduce GHG emissions by 30% by 2030. He assured Ontario residents that his “Made in Ontario” plan would do the job. It can’t and it won’t.

There are three major problems with the Ford 2030 target. First, the 30% emission target is inadequate and out of date. Second, emissions are going in the wrong direction. When Ford was elected Ontario’s emissions were trending down. The latest data indicates the Ford government has bent the emission curve upward. And third, Ford is not serious about any climate targets.

Not serious about climate targets

The Ford climate plan was never intended to accomplish a whole lot, and it still suffers from limited aspiration and listless implementation. The plan identified 17.6 megatonnes (Mt) of GHG emissions for elimination. This figure is the difference between a business-as-usual case of growing emissions and the targeted 2030 goal.

Those 17.6 million tonnes were the province’s most ambitious reach, at a time when the science calls for countries to halve their emissions by 2030. And yet Ford has no credible plan to tackle even this limited number. According to the most recent assessment by the Ontario Auditor General, the government has ”committed policies” in place to eliminate only 3.4 Mt of emissions.

Unfortunately, the shortfall is actually far worse than these figures suggest. Because Ontario has to eliminate far more than 17.6 Mt of greenhouse gas emissions.

If Ontario’s plans were aligned with the federal government’s latest climate target, the province would be planning to reduce emissions by 40 to 45% by 2030. Using the more ambitious number, Ontario’s 2030 emissions would need to be dramatically reduced by 50 Mt, not the 17.6 Mt Ford is promising.

That 50-million-tonne carbon cut will require a huge effort. It is more than the emissions from all the buildings in Ontario. It comes pretty close to all the emissions from the transportation sector, the largest GHG source in the province. And yet it matches up with the 1.5°C pathway laid out by the Intergovernmental Panel on Climate Change (IPCC) in 2018.

There are two major variables in combatting climate change: Time and decisive action. The Ontario government has squandered the one and refuses the other. When Ford came to power, there were 12 years to 2030. By the time of the election in June 2022, he will have squandered four of them.

In her latest report in November 2021, for the third time, Lysyk criticized the province’s response to the climate crisis.

But it is not simply the case that the Ford plan lacks ”sound evidence”. Ford’s climate plan is fraudulent.

For example: When it comes to electric vehicles, one of the largest emission reduction initiatives in the plan, the government included a projected surge in electric vehicle sales that were anticipated based on a subsidy program Ford had already cancelled.

Or take the Emission Performance Standards, supposedly another heavy hitter in the effort to reduce emissions. These are facility- and sector-specific standards that would set a ceiling beyond which industry would have to pay for additional carbon emissions. The government, in response to the Auditor General’s probing, admitted these soft caps and very flexible standards will actually accomplish very little.

The evidence is overwhelming. The Ford government has underestimated what will be required to meet its inadequate, obsolete emission reduction targets. It has exaggerated the results of its proposed initiatives, counted future emission reductions from programs his government cancelled, double-counted the potential gains from various programs, and conjured away the huge remaining shortfall with the magic category of ”future innovation”.

The evidence is clear: The Ford government will fail to reach its 2030 targets.

Ontario is responsible for about 22% of Canada’s GHG emissions. Only Alberta pollutes more. If Ontario is saddled with the continuation of Ford’s climate plan, the province will fail to meet its target, and so will the entire country. And missing the target is increasingly a matter of life and death.

Yet many of Ford’s initiatives will make the climate situation worse:

In the months leading up to last year’s COP 26 climate summit, a number of comprehensive and alarming reports were issued by the IPCC, the International Energy Agency (IEA), and other agencies of the United Nations. The reports described the tragic consequences of the climate crisis. They called for ambitious and decisive action to dramatically reduce emissions and scale back reliance on fossil fuels. They urged massive investments and a rapid shift to a renewable energy supply. And they expressed concern that time is rapidly running out.

The Ford government has ignored them all. And when it comes to the climate crisis, ignoring is denying. Ford’s actions are a disaster for the country. We are in serious trouble. The alarms of a Code Red world are blaring, but Ford insists on playing out the climate deniers’ new strategy of delay, delay.

There are only 69 Conservative Party members in Ontario’s Legislative Assembly, and that means fewer than six dozen individuals are holding the rest of us hostage.

You are invited to an “Enviro-Café” on Tuesday, Feb. 8 at 7:30 featuring David Robertson, from Seniors for Climate Action Now! David will be talking about Ford’s climate crimes.

Register and find out why:
https://us02web.zoom.us/meeting/register/tZ0tcu-urTsoGdUbe_45cMi3Cv-RkPi1fxn2 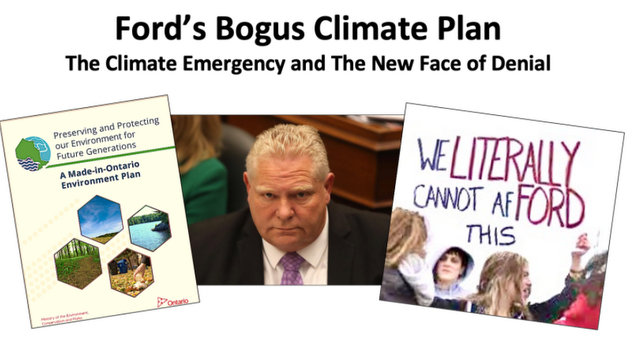 For more on the Bogus Climate Plan, Register here

David Robertson is retired and is a member of Seniors for Climate Action Now!. He has been a researcher, educator and activist for a long time. He is co-author (with Terry Moore) of the critique of the federal government’s climate plan, The Liberal Climate Action Formula: Recipe for Failure [pdf].

ICYMI:
Reversing the Trend on Ads For Gas-Powered Cars, SUVs, Light Trucks
Learning to Tackle More Than One Crisis At a Time
Climate Change: Adaptation Is No Longer a Dirty Word