“The federal government has repeatedly told the public that Canada can be a climate leader while continuing to have a thriving oil and gas sector. In reality, Canadian oil and gas companies have released a range of complex, misleading climate change pledges that must not be taken at face value.” — Canada’s Big Oil Reality Check report.

(This post is sourced directly from Canada’s Big Oil Reality Check report as well as the press release and partner toolkit provided by Environmental Defence Canada and Oil Change International.)

The report shows that major oil and gas companies operating in Canada have climate strategies and expansion plans that will accelerate the climate crisis — rather than help Canada and the world to limit warming to 1.5°C. Oil and gas production is Canada’s largest emitting sector as well as its fastest growing source of emissions.

This report provides a critical assessment of the climate plans of eight Canadian oil and gas producers using a ten-point framework that measures ambition, integrity and transition planning. None come even close to the bare minimum needed for alignment to Paris Agreement goals as shown in the chart below. 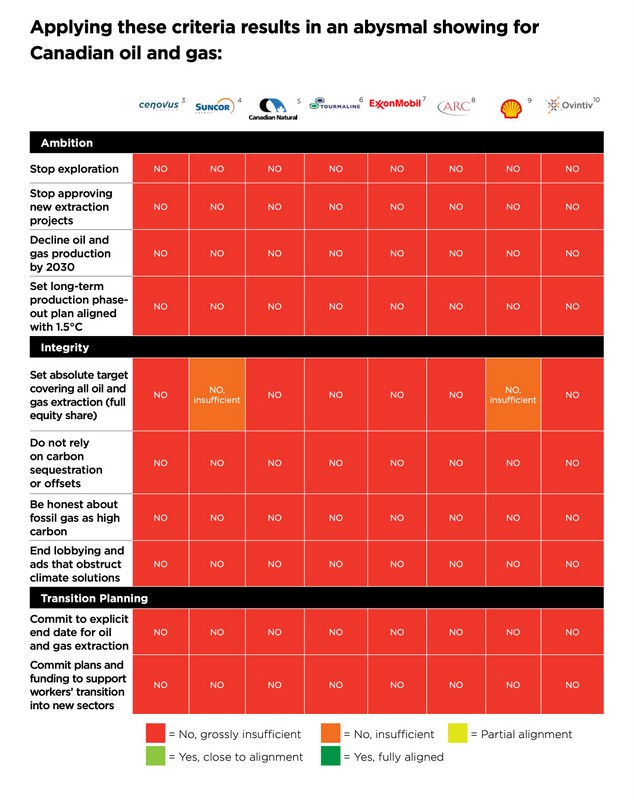 Not one of the eight oil and gas producers has any plan to stop the exploration and approval of new extraction projects or any plan to reduce its production by 2030. And none has committed to ending lobbying and ads that obstruct climate solutions.

The report reveals clearly that “all eight major Canadian companies studied are amongst the worst worldwide, despite all their rhetoric about net zero,” says David Tong, Global Industry Campaign Manager at Oil Change International.

“The expansion plans of these oil and gas companies would continue to undo climate action taking place in Canada on other sources of emissions…all want to increase production, have no credible plans to achieve net-zero emissions, point to false solutions such as carbon capture and storage as the ‘anchor’ of their strategy, and expect governments to give them CAD 50 billion in subsidies to realize their expensive, unrealistic plans,” according to Dale Marshall, National Climate Program Manager at Environmental Defence.

These companies are dodging responsibility for the emissions from their customers burning the oil and gas they produce, setting vague and insufficient “net zero” pledges, and betting on false solutions like carbon capture and storage and fossil-based hydrogen – and all are still complicit in lobbying against climate action.

Governments must say no to Big Oil and Gas, stop approving oil and gas projects, and invest in a fair transition away from fossil fuels for workers and communities.