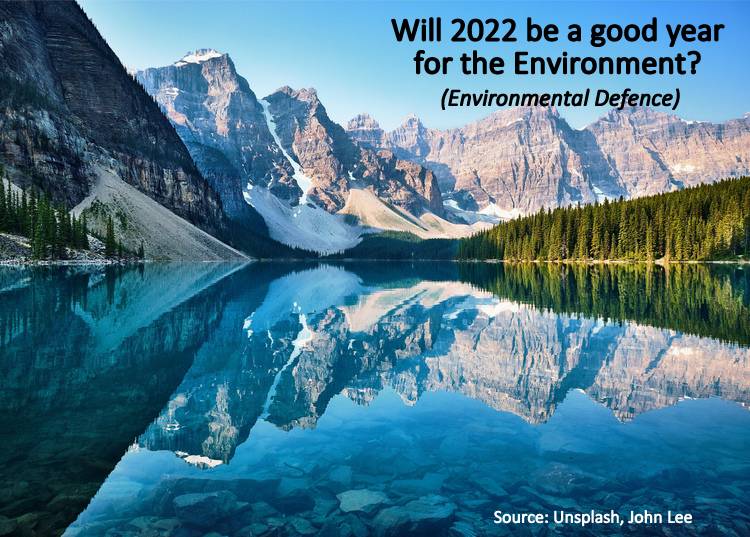 “Canadian politicians won’t be able to ignore climate change in 2022.” according to Maclean’s. As Canadians are learning to live with the COVID threat, “another emergency of existential scale has been implacably gathering strength.” Public opinion is slowly coalescing on the gravity of climate change and the range of solutions our government should be taking.

“The ticking is getting louder, and the costs of both action and inaction rise by the second.” —Macleans

As the urgency to act on climate continues to mount, Canadians will increasingly expect more ambitious climate policy from all levels of government. The following five predictions for 2022 are sourced from an Environmental Defence Canada article by executive-director Tim Gray.

1. Putting a cap on oil and gas carbon emissions

Rising carbon emissions from oil and gas production have washed out reductions from every other sector. As a result, the federal government has committed to developing and implementing a cap forcing industry to reduce emissions to zero by 2050. Expect the oil industry to ask Canadians to pay for any emission reduction measures just as they have asked us to foot the bill for slowing methane gas leaks, cleaning up abandoned wells and addressing the trillions of litres of contaminated tar sands tailings currently leaking into the Athabasca River.

2. Electric vehicles finally come into their own

The coming year will mark the introduction of many new EV models with greater range and lower prices than ever. But if you live anywhere except BC or Quebec good luck getting one. The federal government has finally promised to help address this problem by implementing a new requirement for car companies to sell a certain portion of their overall sales as zero emission vehicles (as BC and Quebec do). 2022 is the year this is supposed to happen.

After years of talking about sustainability while actually cranking up lending to, and investment in, oil and gas companies, we will finally see some positive change. Expect to see citizen campaigns focused on bank hypocrisy and for federal regulators to finally step in and create rules around transparency and reporting with regards to climate-related risk for federally regulated institutions.

4. Some plastics will get banned and a returnable economy makes a new appearance

We expect the federal courts will uphold our government’s right to protect us and our environment from the impacts of plastic pollution and will keep the bans of key single use plastic items moving forward. We also expect to see a growing citizen and business community movement to adopt reusable packaging and support the repair of products (just like the good ole days).

5. The Ontario election will be all about the environment

The Ontario government has launched its re-election bid based on a promise to build more highways, more sprawl, which actually means less habitat for endangered species and more carbon emissions. Expect strong citizen and media engagement in the lead up to the June 2022 election and for environmental policy differences between parties to dominate the debate.

Other predictions by Environmental Defence:

In an unrelated article, Fix Solutions Lab (Grist) asks 22 climate visionaries for their prediction for this year. Read the full article here.

We’ve already sentenced ourselves to some level of damage — Fix

More climate fixers will rise to the climate challenges facing humanity in 2022, “a growing community of visionaries” according to Grist.