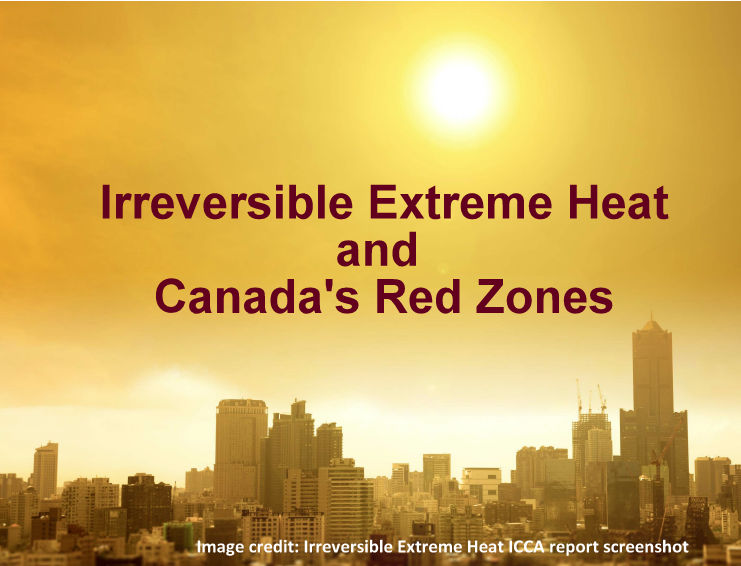 “Canada is warming, on average, at twice the global rate,” says a recent Intact Centre on Climate Adaptation (University of Waterloo) report. “Urgent action is required NOW to manage risk and avoid worsening impacts — and ultimately FATALITIES — resulting from rising heat.” The report which identifies Canada’s “red zones” should raise alarm bells for all Canadians.

(The following post by Gaye Taylor was previously published in The Energy Mix. Additional sections are added from the media release.)

Thousands of Canada’s most vulnerable citizens each year risk suffering and death by extreme heat over the next few decades without collective action to protect them, says a new report from the University of Waterloo’s Intact Centre on Climate Adaptation.

The research identifies small towns and cities in southern B.C.—especially the Okanagan—the southern half of the prairie provinces, and the vast metropolitan areas that run from Windsor to Montreal as “red zones” that will be hardest hit by extreme heat events, with more than 17 million city dwellers at risk.

“Canadian alarm bells should be ringing loud and clear in relation to extreme heat,” states the report. “While flood and fire may be Canada’s most costly natural disasters, extreme heat is the ‘silent killer’.”

Annual loss of life could “surpass the 595 heat-related fatalities reported by British Columbia’s coroner in 2021, and 86 lives lost in Quebec in 2018,” if policy-makers and the public fail to address the problem, says an Intact Centre press release. These fatalities will be predominantly amongst the elderly, the poor, the disabled, and the homeless, according to the report.

“Warming and more intense extreme heat will be present for decades to come,” said study co-author Joanna Eyquem, the centre’s managing director of climate-resilient infrastructure. “If an extreme heat event coincided with an extended electricity outage—with no fans or air conditioning running—loss of life could easily jump to the thousands.”

To become resilient in the face of extreme heat—to withstand and recover from dangerously hot weather— Canadians must learn to adapt.

Urging Canadians to recognize their individual responsibility to reduce their own risks, plus the “opportunity to help protect others more vulnerable than themselves,” the report outlines 35 practical actions to help cope with rising temperatures.

These include designing and retrofitting buildings to promote passive cooling, expanding green spaces in urban areas, and regularly checking in on the community’s most vulnerable.

Casting extreme heat as “an equality issue” that puts marginalized or racialized communities at higher risk, study co-author Blair Feltmate warned that “if we don’t prepare for extreme heat, those who are vulnerable may die.”

The report urges decision-makers to help accelerate heat preparedness by such measures as building heat resilience into home inspections and appraisals.

Cities across the world face a similar threat and they are preparing for it, reports CBC News. Last year, Eleni Myrivili was named Athens’ heat officer, in a European first. Appointed to help her city deal with rising temperatures, Myrivili described at a TED conference in Vancouver, B.C., how people died from heat stress as temperatures in the city reached an unlivable 45°C in the summer of 2021.

“These are temperatures our bodies aren’t made for,” said Myrivili, and “cranking up the air conditioning is just not going to cut it.” She advocated a paradigm shift in the way cities are currently designed, with steel and concrete roads and buildings that absorb heat, adding that a return to ancient but proven ways to keep buildings cool—like whitewashing buildings annually and using aqueducts—should be in the cards for Athens.

“We really, really need to build resilience,” she said.

The media release identifies four asks for decision-makers in preparation for a hotter future:

Check out this Extreme Heat Infographic