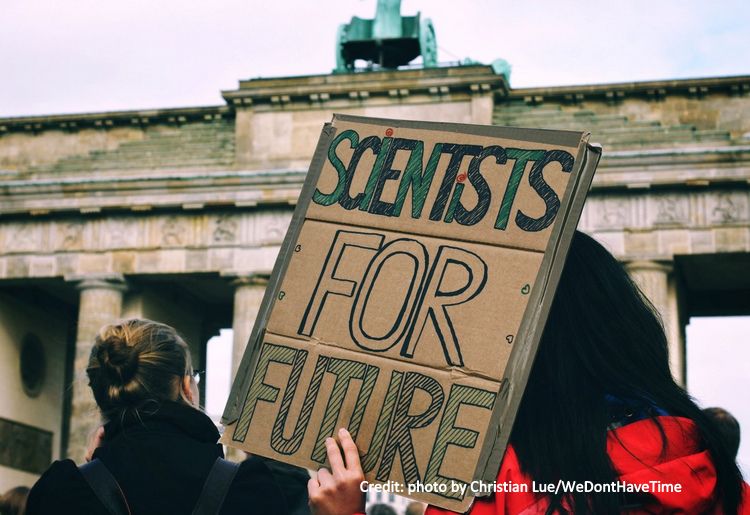 “Scientists have proven without a doubt that climate change is transforming the planet for the worse,” writes the New York Times. “Yet their work has mostly failed to spur governments to address the issue,” prompting many of them to take it to the streets to fight the climate crisis.

(The following post was previously published on the WeDon’tHaveTime platform.)

Scientists Stepping Up On Climate

“Scientists in many countries are getting arrested in a desperate bid to save the planet. The mainstream media hasn’t covered this at all”, says NASA climate scientist Peter Kalmus in this interview with we Don’t Have Time.

When we think of scientists, we imagine people in white coats, leaning over microscopes in laboratories, writing essays on their latest findings, and attending conferences with their peers.

We don’t often imagine plain-clothed individuals being escorted away from a corporate tower in handcuffs, or standing outside government buildings waving desperate signs.

Yet, across the globe, en masse, scientists and environmental experts are risking their civil liberties to shed light on the issue that many of us remain ignorant to.

It isn’t a natural environment for many of these people, but their actions are the result of absolute desperation in the face of the single, greatest existential threat humanity has faced.

Chances are you may have heard about it, but you likely don’t know quite how dire this situation is. Why? Because the mainstream media isn’t giving it the attention it deserves.

Civil Disobedience – taking to the streets

We Don’t Have Time spoke directly to one of these activists, a prolific author, climate scientist at NASA, father and now avid protestor, Peter Kalmus, to understand why he and his peers are taking to civil disobedience in a bid to make change happen now.

A NASA scientist was arrested for locking himself onto a Chase Bank in L.A. alongside other members of the Scientist Rebellion.

AJ+ spoke with @ClimateHuman in a personal capacity about his arrest in the fight for climate justice. pic.twitter.com/ZFevNm8LVA

Like many of us today, Peter Kalmus wasn’t always aware of the severity of climate change, until he was confronted with it directly while pursuing his doctorate.

“It was 2006, and I was halfway through my PhD in Physics at Columbia University. Before that I was blissfully ignorant. I heard about the “greenhouse effect” in elementary school, but it seemed like something super-far in the future, almost science fiction.”

Once he’d seen the evidence, though, Kalmus had to act. In his personal life, from living on 1/10th of the carbon of an average person to amassing one of the largest climate activist presences on social media – and now, by taking to the streets in desperation.

He isn’t the only one, on April 6th alone, thousands of scientists around the globe risked arrest to protest climate inaction because they don’t see any other course of action.

We are in a climate emergency

“Governments have made it clear that they are not going to treat this like the emergency it is. Therefore, the people have to wake up and force them to. It’s really life-or-death.”

Peter Kalmus and other activists posted up outside the J.P. Morgan Chase building, cuffing themselves to the door in a form of civil disobedience.

J.P. Morgan Chase is currently the largest corporate contributor to global warming, and has dedicated $382bn dollars in the last five years alone to fossil fuel funding, something that Kalmus attributes to the ineffectiveness of events such as COP26 and the Paris Summit.

“The corrupting influence of the fossil fuel industry”, as Kalmus puts it, prevents significant action from being taken by global leaders, who are “stuck in short term thinking”.

“They care about the “bottom line” – the quarterly report or the next election. Our system tends to give power and money to people who want power and money”.

This has created a perpetual cycle of inaction that has forced these scientists into these direct forms of activism.

Dangerous radical scientists! How dare you try to save the planet! Thank you Doggo @firstdogonmoon #EarthDay https://t.co/hv7I0uKlw0

His point is underlined by the fact that the same governments which set climate based targets at the Paris agreement, are the same who are subsidising fossil fuels, to the tune of $6trn a year, according to the International Monetary Fund (IMF).

Where is corporate media?

Yet, despite being arrested, escorted away, and facing severe legal repercussions as a result of their civil disobedience, the mainstream media is giving little to no attention to the work of these activists.

While society collectively reeled from Will Smiths’ Oscar slap, and the events of the war between Russia and Ukraine dominate headlines, the impending crisis hasn’t seemed to gain the traction it deserves, something that stumps Kalmus and other activists alike.

‘I think the children and the future deserve that.’

‘Just Stop Oil’ activists protested across London this weekend to demand an end to the fossil fuel economy. Meanwhile, the cost of living crisis means many people are paying more & more for fuel. Are oil protests justified? pic.twitter.com/mnnIFlJvQT

It seems that the inherent topicality of the climate crisis simply doesn’t gain traction the same way that other headlines do, and for many, seems like it did for Peter Kalmus in elementary school – the stuff of “distant science fiction”.

And yet, the latest figures from the Intergovernmental Panel on Climate Change show that unless emissions peak in the next 3 years, and drop by 50 percent in the next 8, we won’t be able to keep global temperatures below 1.5 degrees.

So, what can be done? Peter Kalmus believes that fundamentally, action has to come from individuals through direct civil disobedience.

“The key to breaking out of this deadlock is exposing – and ending – climate denial by the mainstream media. Leaders who talk about the need for action, but who then actually act to accelerate the emergency) must be replaced by people who actually get it.”

In a heartfelt appeal, backed by the consensus of every respected scientific community or panel globally, Peter Kalmus and other scientists want people to “peer into their souls” to take the risk and courage necessary to make this a frontline issue.

“I promise that nothing will make you feel better than supporting civil disobedience or even engaging in it. Yes, it takes courage and it involves risk, but it’s well worth it.”

Join the We Don’t Have Time Platform for Climate Solutions

ICYMI
We Are Sleepwalking To Climate Catastrophe
IPCC: Limits to Climate Adaptation