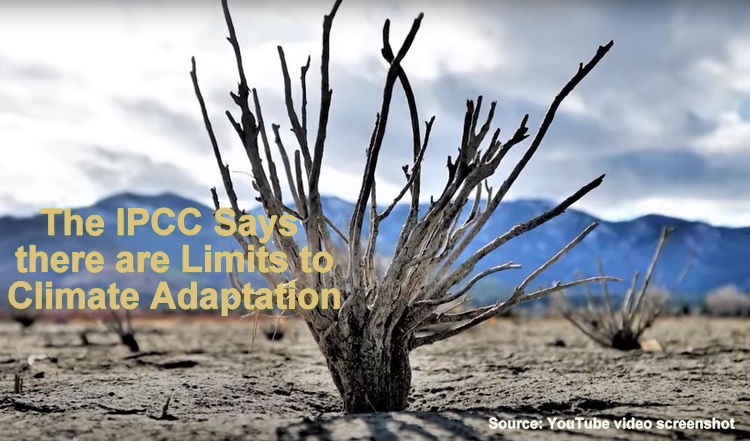 “Humans are adapting to climate change, but it’s not even close to enough — and what little is being done becomes less effective as temperatures rise,” writes Huffington Post.  Adaptation has its limits, both hard—no adaptive actions possible—and soft—options  not currently available. And the longer we wait, the harder it will get to adapt.

(This article is part of The Energy Mix coverage of the latest IPCC report released just days ago.It was previously published in the Mix.)

The Limits of Climate Adaptation

With climate dangers coming on faster, ranging wider, and hitting harder than scientists previously expected, and major impacts unavoidable in the immediate future, a United Nations agency report described by observers as “grim”, “harrowing”, and “unflinching” is looking at how humanity can adapt to climate risk, how much climate adaptation can achieve—and how climate justice has moved to the centre of the conversation.

“Climate change is the ultimate injustice,” World Resources Institute President and CEO Ani Dasgupta said in response to the February 28 release from the Intergovernmental Panel on Climate Change (IPCC). “People with the fewest resources, those least responsible for the climate crisis, bear the brunt of climate impacts,” with about 3.3 billion people—just over 40% of the world’s population—now living in “highly vulnerable” hotspots.

“If you don’t live in a hotspot, imagine instead a roof blown away, a village well overwhelmed by salt water, a failed crop, a job lost, a meal skipped—all at once, again and again,” she added. “Compounding and cascading climate impacts, combined with poverty and conflict, all conspire to upend billions of lives and livelihoods.”

But yet, “there is hope,” Dasgupta added. “We still have a narrow pathway to avoid the very worst climate impacts. The world’s heaviest emitters must urgently cut emissions, significantly scale up international funding for adaptation to strengthen resilience to climate impacts, and provide funding to vulnerable countries to deal with unavoidable losses and damages. At the same time, governments must quickly turn the many promising adaptation plans into action on the ground to protect food, water, homes, and critical infrastructure.”

The report cites three principles of climate justice—distributive justice, procedural justice, and recognition of diverse cultures and perspectives—that can be used to assess different approaches to climate adaptation and weigh the trade-offs that can emerge between community priorities and science-based evidence. It acknowledges that Indigenous and local knowledge “provide important understanding for acting effectively on climate risk and can help diversify knowledge that may enrich adaptation policy and practice.”

In particular, the IPCC says, “Indigenous Peoples have been faced with adaptation challenges for centuries and have developed strategies for resilience in changing environments that can enrich and strengthen current and future adaptation efforts.” The report points to the impact of race, gender, wealth inequalities, and other factors in shaping vulnerability to climate impacts.

The report affirms that the impacts of climate change have become “unequivocal, increasingly apparent, and widespread” since the IPCC released its last full climate assessment in 2014 and 2015. The more than 270 scientists from 67 countries who contributed to the adaptation report identified more than 100 distinct impacts of the climate emergency and broke them into eight broad categories of “overarching risk”:

With greenhouse gas emissions and fossil fuel production still on the rise, “the impacts of climate change and extreme weather events have adversely affected, or caused the loss of ecosystems including terrestrial, freshwater, ocean, and coastal ecosystems, including tropical coral reefs; reduced food security; contributed to migration and displacement; damaged livelihoods, health and security of people; and increased inequality,” the authors write. Climate impacts also interact with “other significant societal changes that have become more salient” over the last eight years, “including a growing and urbanizing global population; significant inequality and demands for social justice; rapid technological change; continuing poverty, land and water degradation, biodiversity loss; food insecurity; and a global pandemic.”

Connecting Emissions to Warming to Impacts

Another important development since the last IPCC assessment is the rise of attribution models that connect impacts more effectively to a changing climate. Some of that research has been historical, showing with a high degree of confidence “that past climate changes have already caused substantial ecological, evolutionary, and socio-economic impacts.”

Those studies, based on the historical, archaeological, and paleontological record along with paleoclimatic data, indicate that species and ecosystems have only limited ability to adapt to rapid climate change. The research shows marine species at greater risk of extinction due to rapid warming than land-based creatures, land-based plants more likely to survive than animals, and populations shifting from equatorial regions to the poles and from lower to higher altitudes.

The report cites multiple instances where climate variability triggered changes in population size and health, social stability and conflict, and population movements, bringing about the fall of cultures, kingdoms, and empires. And now, “the rather narrow climatic niche favoured by human societies over the last 6,000 years is poised to move on the Earth’s surface at speeds unprecedented in this time span,” the IPCC says, “with consequences for human well-being and migration that could be profound under high-emission scenarios.”

Those rapid shifts “will overturn the long-lasting stability of interactions between humans and domesticated plants and animals as well as challenge the habitability for humans in several world regions.”

So far, many of those climate impacts are still not being detected, due to a shortage of monitoring and “robust” analysis, the IPCC says. But when they’re conducted, “detection and attribution assessments inform the risk assessment by demonstrating the sensitivity of a system to climate change, and they can inform loss and damage estimates, including those involved in potential climate litigation cases. Robust detection and attribution methods now exist,” and “they play a significant role in increasing awareness and willingness to act among decision-makers and the general population.”

Against the dire findings in the assessment, the IPCC says “many potential solutions exist, which have not yet been implemented despite the gap between current and adequate levels of adaptation.” While activities in at least 170 countries have produced “multiple benefits” in the effort to adapt to climate change, that progress is “unevenly distributed”, with many initiatives that “prioritize immediate and near-term climate risk reduction which reduces the opportunity for transformational adaptation,” the report warns.

The authors dig into the enablers of effective climate adaptation, including better governance, adequate climate finance, nature-based climate solutions, and better monitoring to track progress over time. “Governance, especially when inclusive and context-sensitive, is an important enabling condition for climate risk management and adaptation,” the report says, and there is increased recognition of the value of wider community participation in climate adaptation decisions.

The IPCC also acknowledges the importance of narrative in explaining climate risks and driving solutions—and takes a page from its own 3,675-page book by using the technique to explain the science behind its conclusions. More broadly, the authors say this is the first in a series of assessments dating back to 1990 to look at the societal response to the climate emergency.

But they take issue with the finality in references to climate “solutions”, since “solving climate change in this sense is not likely for the foreseeable future”. It can also suggest a “narrow set of responses” and technical solutions that leave out a wider range of actions involved in a “transition to resilience”. Instead, they assess a range of different adaptation solutions based on three criteria: justice, feasibility, and effectiveness.

One major approach, nature-based solutions, grew out of efforts “to bring environmental, social, and economic dimensions to the same level of importance, particularly in the context of a highly urbanized society,” the IPCC says. The category includes options like urban storm water management, sustainable drainage systems, urban forests, parks, and green roofs, and some forms of coastal defences.

“Forest restoration would certainly contribute substantially towards climate-proofing and achievement of several Sustainable Development Goals as well as the Paris Agreement,” the scientists write.

“There is increasing evidence that diverse, native tree species plantations are more likely to be resilient to climate change in contrast to fast-growing monocultures,” while “other natural ecosystems such as savannas, grasslands, peatlands, wetlands, and mangroves have considerable value in acting as carbon sinks as well as providing other ecosystem services such as hydrological regulation, coastal protection, maintaining biodiversity, and contributing to human livelihoods, especially pastoralists and fishermen.”

However, not all nature-based solutions are equal. “There are concerns about large-scale conversion of non-forest land into forest plantations for the sole purpose of increasing carbon sinks through bioenergy with carbon capture and storage (BECCS),” they warn. “Such large-scale afforestation may also lead to the dispossession of previous users, such as smallholders and pastoralists,” meaning that nature-based solutions done wrong can contribute to climate injustice while actually driving up greenhouse gas concentrations.

Different nature-based options also operate on their own time scales, and within specific geographic limits, and land use changes must be planned with wider biodiversity concerns in mind. The authors call for “landscape-scale approaches, as opposed to purely protected areas,” to “promote adaptation, conserve and sustainably use biodiversity, and sustain livelihoods” while animal species are on the move.

While the need for increased adaptation programming and funding runs through the report, the scientists warn that humanity is running into two types of limits on how much adaptation can achieve. The report refers to “soft” limits when known adaptation options “are not currently available to avoid intolerable risks,” and hard limits that occur “when no adaptive actions are possible” to forestall those risks.

It lays out approaches to “transformational adaptation”—like changing land use in a community or planning a managed retreat, if that’s needed, rather than just building sea walls—that “can allow a system to extend beyond its soft limits and prevent limits [from becoming] hard limits.” And it devotes a chapter to a form of “climate-resilient development” in which measures to reduce greenhouse gas emissions and adapt to climate impacts also support sustainable development for all.

But ultimately, one of the key steps in at least minimizing the problem is to stop doing things that make it worse.

“Limiting atmospheric concentrations of greenhouse gases reduces the extent of adaptation needed to keep risk within tolerable levels,” and “from a global perspective, understanding of adaptation and its limits can inform judgements about the best balance among levels of mitigation and adaptation,” the authors write. “The level of greenhouse gas reduction, adaptation, and risk management measures are the key factors determining if and when adaptation limits are reached.”

ICYMI:
Climate Change: Adaptation Is No Longer a Dirty Word
“Atlas of Human Suffering” Says UN Secretary General
Unless We End Financing of Coal, It Will End Us